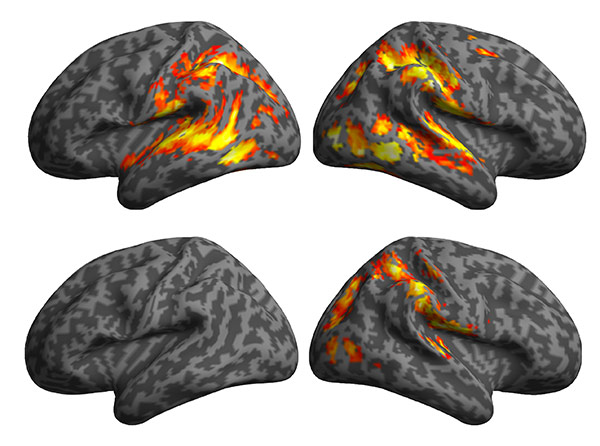 Children with autism vary widely in their language abilities, and a new brain imaging study may highlight the origins of these differences early in life. The study shows that children with autism who struggle with language have abnormally low levels of brain activity in response to speech at about age 1.

The findings, published today in Neuron, point to neural pathways that may underlie language development in children with autism1. They also hint at the possibility of using brain scans to predict language ability in children at risk for the disorder.

In the past five years, several studies have suggested that brain scans may aid autism diagnosis. These scans are far from ready for the clinic but may have utility for distinguishing between different types of autism.

For example, about one-quarter of children with autism speak little or not at all. These children tend to have more severe autism symptoms and struggle with social interactions and everyday tasks.

The behavioral tests that form the mainstay of predicting a child’s future language abilities tend to be unreliable in young children. The new study suggests that in certain cases, brain scans might supplement such tests to boost their accuracy.

“Maybe we should start thinking about how one might incorporate functional imaging in the evaluation process at really young ages,” says lead researcher Eric Courchesne, professor of neurosciences at the University of California, San Diego.

The new study may eventually lead to treatments tailored to this subgroup of children with both autism and language problems.

The work also traces the language problems back to specific regions in the developing brain. “One of the strengths of the study is that it’s looking at very early underpinnings of language outcome,” says Andrew Stanfield, senior clinical research fellow in psychiatry at the University of Edinburgh in Scotland, who was not involved in the study.

Courchesne and his team followed 103 children who had been flagged by pediatricians as being at risk for autism or developmental delays. From around age 1 until age 3 or 4, these children took twice-yearly behavior tests that evaluate language skills and signs of autism. The researchers also assessed how well the children handled everyday challenges — a skill known as adaptive functioning.

The researchers scanned the children’s brains using functional magnetic resonance imaging (fMRI) sometime between age 1 and 2 while the children listened to recordings of a woman speaking.

The children later diagnosed with autism and poor language skills showed dampened activity in two swaths of brain tissue that include language centers. The difference is most pronounced in the superior temporal cortex, an area involved in language and sound processing that has been previously implicated in autism. The findings suggest that impaired activation of this region may be involved in the later emergence of language deficits.

Because this abnormal pattern of brain activity was not seen in children with only language delay, the pattern is likely to be specific to autism.

The results are intriguing, but the algorithm needs further testing and refinement before it is ready for clinical use, experts note.

“They need a lot more data, and a lot more reliable data,” says Nicholas Lange, associate professor of psychiatry at Harvard University’s McLean Hospital, who was not involved in the study. Each child underwent only a single brain scan, and results from an individual tend to vary from scan to scan, Lange says.

Still, the findings point to a possible strategy for treating this subtype of autism, says Courchesne. The children who show strong activation in language areas might benefit from a therapy that relies on language ability, he says, whereas those with low activity in those regions might require a different approach.