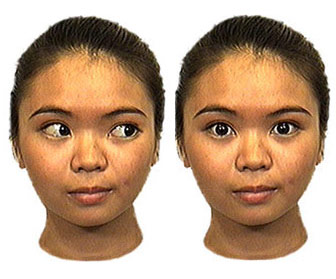 Early sign: Babies who are later diagnosed with autism show a specific pattern of brain activity in response to pictures of direct and averted gaze.

Early sign: Babies who are later diagnosed with autism show a specific pattern of brain activity in response to pictures of direct and averted gaze.

A longitudinal study of infant siblings of children with autism is the first to identify a particular brain pattern that is linked to later diagnosis of the disorder.

The findings are the first published results from the British Autism Study of Infant Siblings (BASIS) network, a collaborative research effort to identify early markers of autism, and one of just a handful of longitudinal studies of so-called ‘baby sibs’ that look at brain activity.

“This is the first study I know of to use brain imaging to predict the disorder, not just distinguish between high- and low-risk groups,” says Charles Nelson, professor of pediatrics and neuroscience at Harvard Medical School, who was not involved in the research.

According to the research, published 24 January in Current Biology, the brains of typically developing 6-month-old babies react differently to images of faces looking toward them than to those looking away1. The brains of babies who are later diagnosed with autism, however, show little difference.

The researchers say they hope the study will also help to identify protective factors for infants at risk of developing autism. For example, some babies who showed the autism-linked brain pattern did not go on to develop the disorder.

“We want to know what is different in how the brain develops and changes over time that leads to disabling symptoms in some children and has very minimal impact on others,” says lead investigator Mayada Elsabbagh, assistant professor of psychiatry at McGill University in Montreal.

Elsabbagh and her collaborators studied 54 infants who have an older sibling with autism and 50 infants with no family history of the disease.

The researchers gave the infants a battery of behavioral and brain imaging tests at 6 to 10 months of age and followed them until 36 months of age, when the children underwent diagnostic tests. At that point, the researchers diagnosed 17 toddlers in the at-risk group with the disorder. None of the children in the control group developed the disorder.

Behavioral signs of autism are difficult to detect before 2 or 3 years of age, which is when the disorder can be reliably diagnosed. But previous research has shown that infants at high risk of developing the disorder already show altered brain activity in response to faces and eye gaze, as do children and adults with the disorder2,3.

To assess brain activity in infants, researchers place sensors on the head that can measure changes in voltage in response to specific cues, known as evoked response potentials (ERPs). Elsabbagh’s team measured ERPs as babies looked at a face in which the eyes alternated between looking at them and away from them.

In 6-month-old babies who were considered typically developing at 3 years old, there was a strong difference in ERPs depending on the direction of gaze.

But in those who later received an autism diagnosis, “the differences between the two types was much smaller, and in many babies not there at all,” says Mark Johnson, director of the Centre for Brain and Cognitive Development at the University of London and senior scientist on the study.

This distinct activity pattern was specific to changes in gaze: Researchers didn’t find differences in brain activity between the two groups for other, similar tests, such as static pictures of faces looking head-on or away, or an image with the same visual properties, in this case a scrambled face.

“That suggests that having dynamic and possibly socially relevant stimuli is important,” says Johnson.

The researchers caution that the ERP signature cannot be used to definitively predict whether an infant will go on to develop autism.

“Those changes in brain function are just one piece in the puzzle,” says Johnson. “We do have children who show early differences but do not go on to develop autism.”

As a result, early diagnostic tools are likely to require a combination of different measures, the researchers say.

The paper is the first result to be published by the BASIS network since the infants turned 3 and could be reliably assessed for autism. Johnson says that additional findings, including assessments of visual attention in early infancy and measures of parent-infant interaction, are expected to come out over the next few months.

Identifying signs of autism as early as possible is crucial both for understanding and treating the disorder.

“If we can catch the culprit early on, maybe we can have a better idea of what is causing autism to begin with,” says Karen Dobkins, professor of psychology at the University of California, San Diego. “Then we can better target intervention.” Dobkins was not involved in the current study but also works on baby sibs.

She and others suggest that early sensory problems contribute to the later development of the core symptoms of autism. Difficulties in distinguishing eye gaze, for example, could have cascading effects, making it difficult for children to follow someone’s gaze, an important form of social communication.

“Understanding the nature and meaning of eye contact is one of the strategies that children use to start learning about the social world,” says Elsabbagh. “It’s important for the development of a wide range of social and language skills that go awry in autism.”

The researchers are also interested in finding protective factors that might prevent at-risk infants from developing autism. As the study shows, some children whose brains show abnormalities early on seem to get onto a more typical developmental path.

It’s not yet clear whether this is due to genetic or environmental factors, or a combination, and whether it can be influenced. Researchers are looking at the way infant siblings interact with parents under natural conditions to see if there is something that distinguishes these two groups.

They are also beginning to develop and test early behavioral interventions based on parent training and plan to measure brain activity throughout the process.

Says Elsabbagh, “It’s an exciting direction because we can start to answer the question of whether we can change early risk factors.”