Brain response to facial features may lag in autistic people 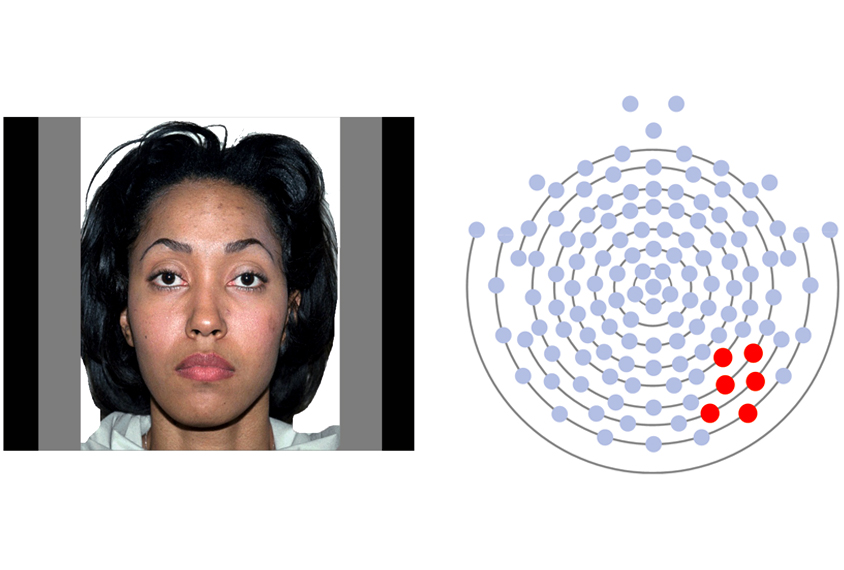 Face off: A brain response that indicates facial recognition is delayed when autistic people are cued to look at noses, eyes or mouths.

Autistic people’s brain responses to individual facial features are slower than those of non-autistic people, according to a small unpublished study.

About 170 milliseconds after a person sees another person’s face, electrical activity spikes in the brain. This response, known as the N170 event-related potential, is thought to mark the moment when the brain distinguishes between two faces, or between a face and an object; it is often delayed in autistic people. The U.S. Food and Drug Administration is considering the N170 response as a biomarker for subgroups of people with autism.

Most research has explored the brain’s response to the whole face or to isolated features. Some research suggests that autistic people often focus on different parts of faces than non-autistic people do. In the new work, researchers used a novel technique to examine brain activity in response to individual facial features in the context of a full face.

“I think there hasn’t been enough work in terms of seeing how different fixation patterns are affecting and relate with N170s that are elicited,” says Shashwat Kala, a medical student in James McPartland’s lab at the Yale University, who presented the work.

The team used electroencephalography to measure the N170 in 8 autistic and 17 non-autistic adults. They showed participants a gray screen with a black plus sign where a person’s nose, mouth, right eye or left eye might be if there were a face there. They displayed an image of a face immediately after, cuing the participants to look at a specific facial feature. (They also showed participants images of houses, but those data were not included in this study.)

Eye-tracking confirmed that the participants directed their attention to the features they were prompted to focus on. And for all four facial features, autistic people’s brains responded about 20 milliseconds later than non-autistic people’s did, the team found.

High scores on all three measures correlated most with delayed N170 responses to looking at the left eye. Because the sample size is so small, however, the associations are preliminary, Kala says. The team hopes to expand their sample size once pandemic restrictions allow.

Better understanding how the N170 response correlates with autism traits could make its use as a biomarker more effective, Kala says. “Even nuanced, slight differences in associations are particularly important if you are thinking about something as a stratification biomarker.”