Brain organoids may shed light on seizures in Angelman syndrome

The mutation that causes Angelman syndrome makes neurons hyperexcitable, according to a study in brain organoids and mice1. The findings may help explain why about 90 percent of people with the syndrome experience seizures that do not respond to treatment.

Angelman syndrome is a rare genetic condition linked to autism. It is caused when the maternal copy of a gene called UBE3A is either missing or mutated. Apart from seizures, the condition is characterized by developmental delay, problems with balance and speech, and an unusually happy disposition.

The new study found that mutations in UBE3A suppress the production of proteins that keep the activity of ‘big potassium’ ion channels in check. These channels control the flow of large amounts of potassium ions passing through neurons. When the current increases in the absence of UBE3A, the neurons become exceptionally excitable.

“What actually happens is quite a simple mechanism that was previously not shown before,” says Shawn Je, associate professor of neuroscience at Duke-NUS Medical School in Singapore, who helped design the study.

Drugs that block the activity of these channels ease seizures in mice missing a copy of the gene, the team also found. The finding suggests that the big potassium channels are responsible for the hyperexcitability underlying the mice’s seizures — and highlights a potential treatment for Angelman syndrome.

“This study seems to give a very good explanation of why there are seizures in these [people],” says Johan Storm, professor of brain signaling at the University of Oslo in Norway, who was not involved with the study.

Storm notes that the study builds on his 1987 study, which looked at the how big potassium channels influence the way neurons fire2.

“It’s an interesting case of basic research paying off 30 years later,” he says. “I think that’s good motivation for doing basic science. It may not be immediately obvious why it’s important.” 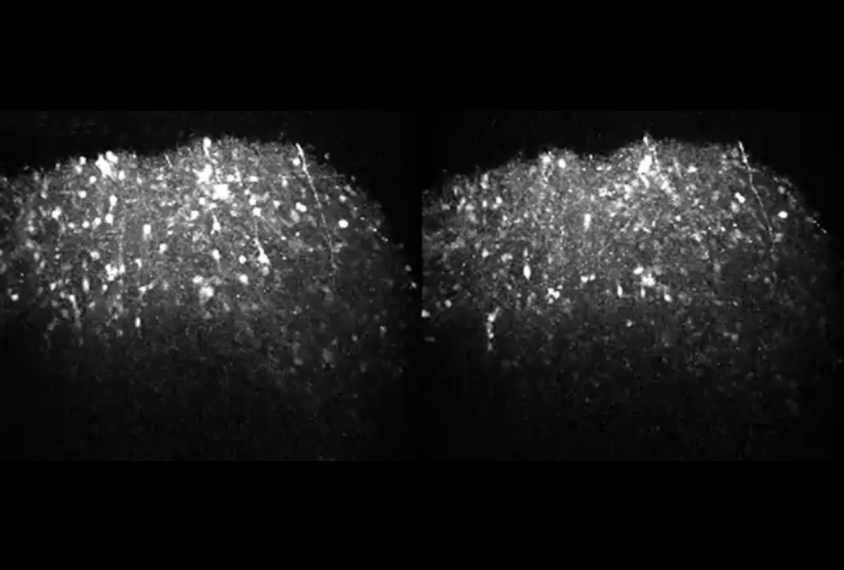 Excitable neurons: Neurons in brain organoids missing a copy of the gene UBE3A fire at unusually high frequencies (left); a drug that lowers the activity of big potassium channels normalizes them (right.)

Je and his colleagues used the CRISPR-CAS9 gene-editing tool to snip UBE3A from the DNA of human embryonic stem cells. They then coaxed the cells to differentiate into cortical neurons.

“About eight years ago in our lab meeting, one of our students asked me why we bother to use mouse models,” Je says. “I mean, we are dealing with autism, which is kind of human-specific. Why not make the human neuron or human brain? That’s how we actually started this whole project.”

The edited neurons fire at significantly higher frequencies than controls do when stimulated with electricity, the researchers found. Adding UBE3A protein to the neurons normalizes their firing.

The researchers then made neurons from skin cells donated by a person with Angelman syndrome. Like neurons lacking UBE3A, Angelman neurons fire at unusually high frequencies; and adding UBE3A protein also normalizes their excitability.

The findings suggest that UBE3A’s absence contributes to neurons’ hyperexcitability.

The big potassium channels in both the Angelman neurons and the CRISPR neurons carry unusually high electrical currents, the team found.

Je’s team also grew organoids — 3D clusters of neurons that fire together in ways that mimic a person’s brain activity — from the neurons lacking UBE3A. The organoids, too, show high levels of excitability linked to the big potassium channels, as well as synchronized patterns of hyperactivity that resemble seizures seen in people with Angelman syndrome, the researchers say.

“The changes in these potassium channels are probably critical for the mechanism underlying the hyperexcitability which has been reported in Angelman syndrome,” says Michel Baudry, professor of biomedical sciences at Western University of Health Sciences in Pomona, California, who was not involved with the study.

The researchers also treated mice missing the maternal copy of UBE3A with drugs that lower activity in the big potassium channels. The treatment decreased the mice’s susceptibility to seizures and the seizures’ severity. The finding could pave the way to a therapy for Angelman syndrome, Je says.

The work appeared in December in Science.

Decreasing the frequency or severity of seizures in children with Angelman would improve the whole family’s quality of life, Je says. For instance, he notes, people with Angelman syndrome often do not get more than a few hours of sleep each night: “If you can even just treat those conditions, I think their quality of life is so much better.”