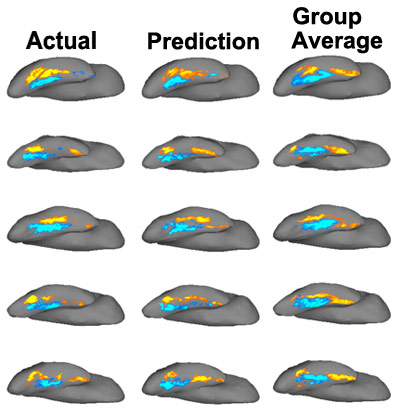 Structural connections in the brain’s face-processing region can be used to predict brain activity in response to faces, according to research published in the February issue of Nature Neuroscience1.

The intimate link between brain structure and function may seem obvious to most neuroscientists, but that link had not previously been put to the test so explicitly.

“Everyone believes that area is functionally specialized,” says John Gabrieli, professor of cognitive neuroscience at the Massachusetts Institute of Technology. “Now we have shown that purely structural measures can identify the functional spot.”

Previous research points to deficits in face-processing in people with autism. If the findings can be extended to this group, he says, they might help researchers understand the role this region — called the fusiform gyrus — plays in the disorder. This is likely to be especially useful for studying people who are too impaired to perform the functional tasks typically used to assess the region.

The fusiform face area (FFA), part of the fusiform gyrus, is thought to underlie our ability to recognize faces.

Although its precise location in the brain varies slightly from person to person, researchers can reliably identify this area with functional magnetic resonance imaging (fMRI). They typically compare brain activity as people look at faces and other objects, to tease out the specific region in the temporal lobe that is more responsive to faces than to objects.

However, identifying a structural correlate of that area — a set of brain cells or an anatomically defined region, for example — has proven impossible. That makes it difficult to study how the FFA may be altered in disorders such as autism.

Ever since the FFA was discovered more than a decade ago, “researchers have been trying to find something anatomically distinctive from the tissue around it,” says Gabrieli.

In the study, researchers used a variation of MRI called diffusion weighted imaging, which estimates brain connectivity by measuring the diffusion of water molecules along the brain’s neuronal processes. The imaging technique allows them to determine how well-connected each voxel, or three-dimensional pixel, of the brain is with each other voxel.

After analyzing brain structure in 23 healthy people, the researchers used fMRI on the same group to locate the FFA, by measuring their brain activity in response to faces.

Using data from 22 of the 23 individuals, researchers calculated the best-fitting mathematical relationship between the diffusion imaging and fMRI data, a process known as linear regression. They then applied that mathematical model to the 23rd participant to predict the functionally defined FFA region — the part of the brain most selective for faces — and compared that prediction with the actual fMRI data for that individual.

The researchers repeated this process for each of the 23 participants, and then averaged the individual results to create a group model. (Because the location of the face-processing area can vary from person to person, the researchers wanted to create a model that would be applicable to most people.)

Applying this group model to diffusion imaging data from a new set of 23 participants, the researchers found it can better predict the functional activation in an individual’s brain in 70 to 80 percent of the group than the current best method — a group average of face-selective brain activity.

What’s more, the method captures individual variability. Researchers found that an individual’s own connectivity measures are better at predicting his or her own functional activity than are someone else’s measures.

The fact that this approach can make predictions about individuals is particularly appealing, because that is “of fundamental importance for ultimately translating imaging work to patients,” says Bradley Schlaggar, associate professor of developmentalneurology at Washington University School of Medicine in St. Louis, who was not involved in the study.

The researchers are applying the same technique to high-functioning people with autism. If it can successfully predict brain activity in the same way it has in the current study, they say, they aim to use it to study the FFA in people across the autism spectrum.

“Functional brain studies have been limited to the most high-functioning individuals, because we had to use active tasks that required following instructions,” says Gabrieli. “This method may open ways to look at the many autism patients who cannot follow task instructions.”

The role of the face-processing region in autism is controversial. Some studies have shown that the FFA is functionally impaired or even non-existent in people with autism. Others have found that it seems to function normally, but that other parts of the brain network that processes faces appear impaired2.

The conflicting findings could be the result of variation among individuals, says Gabrieli, or differences in the task itself.

For example, one study has found that the area responds normally to images of familiar people, such as an individual’s mother, but not to those of strangers3.

The new method might help resolve these differences. If researchers can define which aspects of the network are necessary for face-processing in typical people, they can determine whether any of its connections to other parts of the brain have gone awry in autism.

“I am optimistic that [this research] has huge applicability for understanding normal development as well as autism and other developmental disorders,” says Marlene Behrmann, professor of psychology at Carnegie Mellon University in Pittsburgh, who was not involved in the study.

It’s not yet clear how well the approach will extend to other areas of the brain. But researchers are starting to explore that by studying another brain region that has proven challenging to define structurally, the temporal parietal junction. This area has been linked to theory of mind. Like face-processing, deficits in theory of mind — the ability to understand the intentions of others — are thought to be a feature of autism.