Brain damage in premature newborns may raise risk for autism 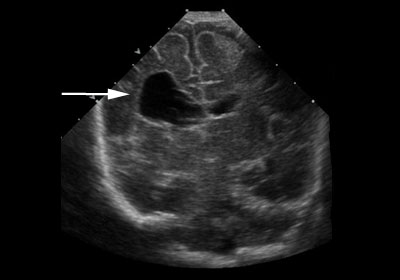 Brain scan: One marker for white matter damage is a ventricle, a fluid-filled space in the brain, that is enlarged (left, white arrow) compared with the control (right).

Low-birth-weight babies with injury to their white matter — the nerve fibers that connect different brain regions — are more likely to be diagnosed with autism as adults, says a two-decade study published 11 February in the Journal of Pediatrics1.

The findings are part of the Neonatal Brain Hemorrhage Study, an effort that began in the mid-1980s. Researchers used cranial ultrasounds to analyze the brains of more than 1,000 newborns weighing between 500 and 2,000 grams (1.1 pounds and 4.4 pounds). They performed these ultrasounds within the first few days of the infants’ lives.

Radiologists determined whether the babies had any brain damage, including hemorrhages, ventricular enlargements or lesions in
brain tissue.

The researchers then assessed some of the participants for autism 21 years later. They found that infants who have any kind of white matter injury are three times as likely to develop autism as those also born at a low birth weight, but without any brain damage.

In particular, infants with enlarged ventricles — spaces in the brain filled with cerebrospinal fluid — have a sevenfold increase in autism risk compared with controls.

“There’s been a lot of controversy among the public and among researchers about whether autism develops in utero or after birth,” says Movsas. “This study gave us a look, at least in a low-birth-weight population, that the risk factors for autism start very early on.”

Other scientists say the findings aren’t conclusive, pointing to the study’s small size.

Although the initial study included 1,105 babies, only 14 were diagnosed with autism as adults.

It’s possible the 14 participants developed autism because of another reason, says Charles Nelson, professor of pediatrics at Harvard Medical School and Boston Children’s Hospital, who was not involved with the study.

“[It] could be attributed to the prevalence in the general population, and have nothing to do with being low-birth-weight or having ventricular enlargement,” Nelson says.

When the study’s participants turned 16, the researchers screened 623 of them for autism2. (The others had died, been adopted or lost touch with the researchers.)

When the participants turned 21, the researchers invited back 189 of them — 70 of whom had screened positive for autism and 119 who had screened negative. This was one of the precautions they took to ensure that the sample is representative of the larger group.

Of the remaining 175 participants called back, 41 had abnormal ultrasounds, including 8 with ventricular enlargement.

There are a number of reasons an individual could have enlarged ventricles, including hydrocephalus, a buildup of fluid in the ventricles that puts pressure on the brain. But the researchers say that often it’s because the infants have less white matter than do their peers with typically sized ventricles.

“The ventricular enlargement represents the fact that the white matter of the brain has less tissue to it, and therefore the holes in the brain look larger,” Movsas says.

Hemorrhages do not increase the risk of autism, and neither do tears in the brain tissue in the absence of ventricular enlargement, the researchers found.

Two studies within the past five years have hinted that brain damage in preterm infants is a risk factor for developing autism.

The new study uses more rigorous diagnostic tests than the other studies do, says Michael O’Shea, pediatrics professor at Wake Forest University Health Sciences in Winston-Salem, North Carolina, who was not involved in the study3,4.

It’s also unusual for a study to follow children from infancy to adulthood, but assessing people for autism at age 21 has its advantages, Movsas says. Although many children are diagnosed by age 3, the average age of an Asperger syndrome diagnosis is 10 years.

“By screening for autism at 16 and assessing for autism at 21, we were able to capture all children who developed autism and not worry at the time of assessment that some of them may still develop it later on,” she says.

Low birth weight itself is a risk factor for autism, but it’s not clear why this is the case.

It is important to learn what increases the risk for autism more: low birth weight or younger gestational age. A number of babies born small don’t gain weight easily, says Alan Leviton, director of the neuroepidemiology unit at Boston Children’s Hospital, who was not involved in the study.

“The growth-restricted babies are at increased risk for a number of problems,” Leviton says. “One wants to be able to say that most of what we see [in terms of autism] is not due to that.”

The researchers may soon be able to answer this question. They are looking at a variety of risk factors using blood samples and magnetic resonance imaging in another cohort of more than 1,000 premature infants born between 2002 and 2004.