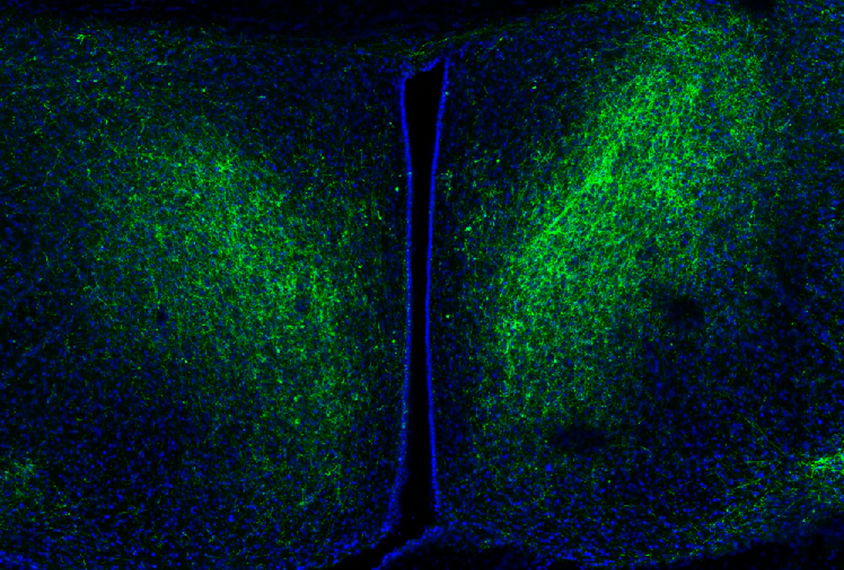 Social signals: Neurons in the amygdala send information about social reward to cells in the hypothalamus.

A brain circuit that connects the amygdala to the hypothalamus is essential for deriving pleasure from social interactions, according to a new study in mice. Alterations in this circuit may help explain why autistic people tend to have less social motivation than their non-autistic peers.

The release of the neurotransmitter dopamine into the striatum prompts the rewarding feelings that come from stimuli such as food or sex, previous research shows. But it was unclear whether all social reward is processed in that same circuit, or if it occurs in a separate brain area that later links up with the striatum, the brain’s reward center, says lead researcher Weizhe Hong, associate professor of neurobiology and biological chemistry at the University of California, Los Angeles.

Hong and his colleagues trained mice on a social test and then altered activity in the animals’ medial amygdala, which has been linked to the regulation of social behaviors. Cells in the area carry information about social reward to the medial preoptic area of the hypothalamus, the team found. And activation of this circuit prompts the release of dopamine in the striatum.

“It’s filling a gap that existed” in the field, says Jessica Walsh, assistant professor of pharmacology at the University of North Carolina at Chapel Hill, who was not involved in the study.

Hong and his colleagues deployed a new social test, placing a mouse into one side of a two-chambered box that has two small holes. When an animal pokes its nose into one hole, a gate to the other chamber opens up, revealing another mouse that it can interact with for seven seconds. If a mouse pokes the other hole instead, the gate remains closed.

After a week in this setup, mice show a strong preference for poking the social hole over the nonsocial one, Hong and his colleagues found. If there is no companion behind the gate, though, mice don’t develop that preference — suggesting that a desire for social interaction drives the behavior.

The researchers also injected a fluorescent dopamine-detecting virus into the animals’ nucleus accumbens, a region in the striatum previously linked to processing social rewards.

Engaging the social-reward circuit in situations mice typically avoid, such as when they venture into open spaces or the uncovered arms of a maze, motivated the animals to seek out those otherwise negative experiences.

Those findings underscore just how rewarding social interactions can be, Hong says: “They’re probably more rewarding than we thought before.”

If the activation of this circuit can buffer against unpleasant experiences and augment social motivation, it may be a potential therapeutic target for autistic people, says Matthew Anderson, associate professor of pathology at Harvard Medical School, who was not involved in the work.

But others urge caution. The researchers interpret activation of the circuit as mimicking social reward, but the experiments are not conclusive, Walsh says. Before the circuit could be a treatment target, it would be important to parse out whether activating it just enhances sociability or social motivation, or if it could also contribute to addiction.

Even if it doesn’t lead to treatment, the work “reinforces the importance of studying these subcortical circuits as the potential sites where genetic and non-genetic mechanisms” result in atypical social motivation for autistic people, Anderson says.

For now, though, Hong and his colleagues want to better understand how signals from the medial preoptic area end up activating dopamine release in the nucleus accumbens.

“We really want to link the circuits together to have a clear understanding of what’s going on,” he says.