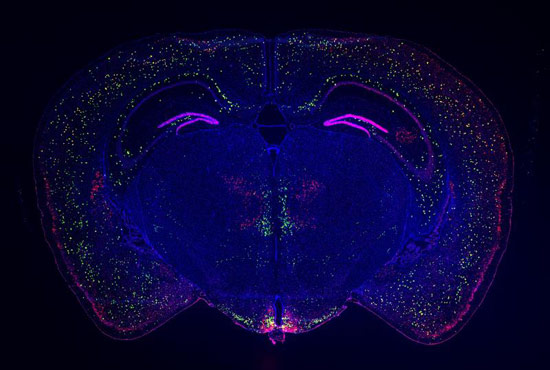 Smart chart: Section of a mouse brain showing where multiple genes are turned on using a technique called in situ hybridization. Blue reveals all cells; green and red show where different genes are expressed.

When her 18-year-old daughter Ragan, died of a seizure, Teri Baker ― like any mother would be ― was in shock.

Unlike most mothers, however, Baker immediately made plans to donate her daughter’s brain for research.

After Ragan had been diagnosed with autism in 1997 ― when “autism wasn’t in anyone’s vocabulary” ― Baker talked to Isabelle Rapin, a researcher who had driven home the need to study autism in postmortem brain tissue. “[Rapin] planted the seed,” says Baker.

To understand how the brains of those with autism function differently, researchers need to study them in detail ― and at a resolution that methods such as imaging cannot provide.

But postmortem tissue is a precious commodity, and these studies are not for the faint-hearted: investigators are up against small sample sizes, uneven tissue quality and the heterogeneity inherent among cases of autism.

Among the hearty ranks is Eric Courchesne of the University of California, San Diego, who, with the expertise of the Allen Institute for Brain Science in Seattle, in April began a study of frontal cortex ‘microstructure’ in autism.

Scientists have long suspected that something goes awry during brain development in autism, particularly in the frontal cortex, which is abnormally enlarged1,2.

Courchesne is looking for irregularities in brain development by tracking the numbers and locations of different cell types in the cortex using cell-specific markers. This data may reveal whether there are abnormalities in key developmental events such as cell differentiation or migration.

“It’s a much more specific assay than people have used in the past, where they generally relied on either volume measurements or total cell count measurements,” says Ed Lein, project leader at the Allen Institute. 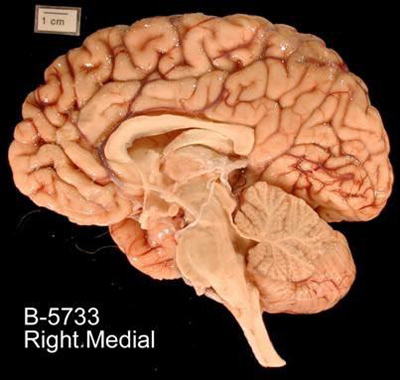 
Precious resource: Postmortem brains for autism research are hard to come by, and those that become available have to be carefully processed.

The focus on development means the postmortem tissue needed for the study is doubly precious, as it has to come from young donors. The study aims to compare eight autism cases to eight age-matched controls.

“The pool of tissue for looking at very young autistic cases is quite small, and it’s very limiting for these studies,” says Lein.

The researchers plan to identify the different cell types by looking for the expression of genes that are only found in those cells. The Allen Institute has honed its techniques on mouse brain and human visual cortex, but researchers need to find markers for the frontal cortex. They will also try to pinpoint where autism candidate genes are expressed in the brain, says Lein.

The technique they will use, in situ hybridization, can be tricky because the brains need to be prepared in a way that fixes the gene transcripts in place but that still allows access by cell-specific markers.

Researchers are sticklers for tissue preparation in animal studies, but human tissues require more leeway. Human tissues arrive already prepared, typically taken from one hemisphere of the brain frozen, and the other fixed in formalin, allowing each brain to be used in different types of studies.

“You’re getting tissue that someone else has fixed or frozen,” says Gene Blatt, associate professor of anatomy and neurobiology at Boston University. “A lot of our time is spent just taking a few sections and trying different things with them in order to optimize the techniques.”

Using in situ hybridization on postmortem tissue, Blatt has found that the brains of those with autism show abnormal expression of genes related to GABA, a neurotransmitter that dampens neuronal signaling in the brain3,4.

There are 305 brains available for autism research stored in ‘brain banks’ across the United States. Each brain can be used in up to 20 studies, but the demand is far greater.

“Requests for tissue are increasing,” says Jane Pickett, director of the Autism Tissue Program (ATP), which tracks brain donations from individuals with autism into all brain banks. The program has helped collect 157 brains, including 8 from controls, over the past decade, and approves use of specimens from the Harvard Brain Tissue Resource Center, the largest brain bank in the country.

The ATP also tries to standardize how tissues are collected, stored and classified because researchers need brains drawn from a fairly homogeneous subset of autism cases. Donors are classified using the Autism Diagnostic Interview-Revised (ADI-R), which relies on information given by the family after the individual has died.

“The ADI-R is basically the gold standard of research in terms of looking at diagnosis and where [donors] fall on the spectrum,” says Connie Frenzel, an outreach coordinator for the program.

Autopsy reports, medical records, education history and specifics about the brain itself are also are kept on the ATP’s information portal and coded to protect the donor’s identity, allowing scientists to choose the samples most appropriate for their research.

The unexpected nature of death in autism complicates matters. Brains must be obtained quickly, usually within 24 hours of death. But other factors, such as the cause of death, how the tissue is handled, and even the weather, can have an impact.

“It could be the middle of winter in Minnesota and 36 hours and still be a perfectly fine donation. It could be in Arizona in the summer where four hours is horrible,” Pickett says.

ATP encourages families to consider donating brain tissue through their registration program. After the donation, it passes information along to interested families about the studies that use the tissues of their loved ones.

Teri Baker knows her daughter’s brain tissue has been included in 11 studies. “She’s contributing in ways that only she can,” Baker says. “I feel very proud.”