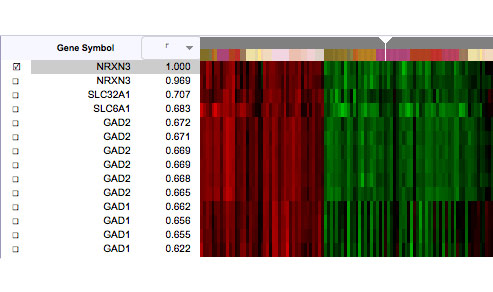 Breaking ground: A new brain ‘atlas’ reveals that the autism-linked gene neurexin-3 is expressed in the same neurons as enzymes associated with the disorder.

Breaking ground: A new brain ‘atlas’ reveals that the autism-linked gene neurexin-3 is expressed in the same neurons as enzymes associated with the disorder.

A new tool called BrainSpan is providing researchers with exquisitely detailed windows into when genes are expressed and where they are located as the brain develops. An overview of the project was presented Sunday at the 2011 Society for Neuroscience annual meeting in Washington, D.C.

BrainSpan is a collaboration between researchers at the Allen Institute for Brain Science, which developed the Allen Brain Atlas, and four universities. All of the data are freely available to researchers through several interactive modules on the project’s website.

Researchers plan to add data to the online database until 2012 when the atlas is scheduled to be complete.

Last week, for example, the project released one component, the ability to look at gene expression across 300 different brain structures at a key stage in development: 15 to 21 weeks post-conception.

“I think it is a fantastic initiative. We know so little about the developing brain,” says Michael Anderson, assistant professor of cognitive science at Franklin and Marshall College in Pennsylvania, who was not involved in the project. “[These data] will help us uncover the numerous brain-gene-environment interactions that will be absolutely crucial to understanding what makes us tick.”

The atlas also includes gene expression data from 42 postmortem brains, ranging in age from 8 weeks post-conception to 40 years. Data are available across development for 16 different regions, including the hippocampus, the amygdala, the cortex and the striatum.

For a subset of genes, BrainSpan also provides a visual picture of expression in brain slices. A reference atlas for a brain at 21 weeks post-conception is available, and others are in the works.

“I hope that this is going to be something that autism researchers can use to look up any gene that they want to see, when it’s expressed and if it’s expressed in a particular structure that may be perturbed in autism,” says Ed Lein, senior director of neuroscience at the Allen Brain Institute.

At the Allen Brain Atlas exhibit booth on Monday, for example, Lein looked up NRXN1 and NRXN3, two closely related autism candidate genes, and saw that they are expressed in very different regions of the brain.

“You can see each of these genes has a very specific pattern and you need this level of anatomical specificity to understand it,” he says. “On the other hand, if you have a broad developmental survey you can get a nice view of how this pattern changes over time.”

NRXN3 has a particularly interesting localization pattern, according to the atlas: It is highly expressed in ganglionic eminences, the transitional brain structures that generate inhibitory neurons.

The atlas also allows researchers to find genes with the same patterns of expression. For example, NRXN3 expression in the cortex overlaps with that of several genes important in inhibitory neurons, including GAD1 and GAD2.

“This is kind of an addictive toy to play with,” Lein says, “but also one where you can get more serious about taking a systematic approach.”