Brain anatomy differences in autism may vary by age, sex 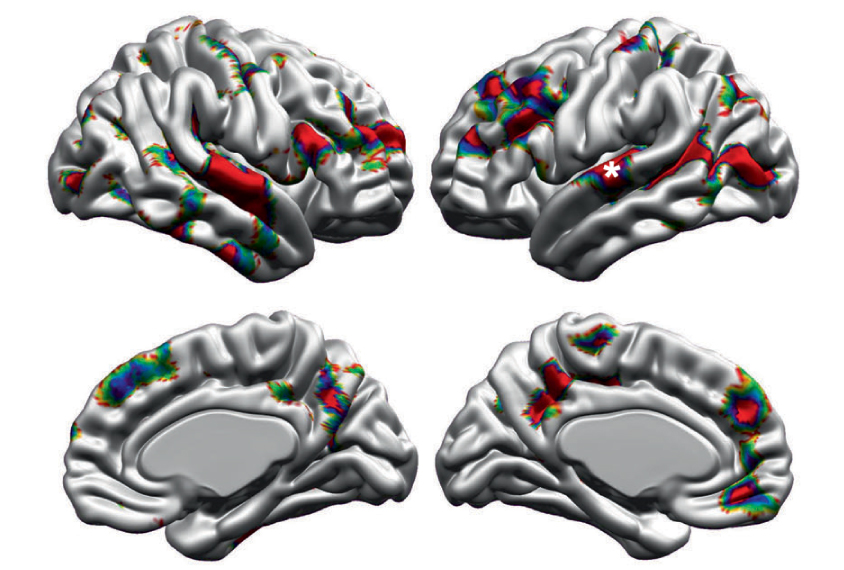 Extra matter: Many areas of the cortex are unusually thick in people with autism.

Several regions in the outer layer of the brain are thicker in children and young adults with autism than in their typical peers, a new study finds.

The differences are greatest in girls, in children aged 8 to 10 years, and in those with a low intelligence quotient (IQ)1.

During typical development, the brain’s outer layer, called the cerebral cortex, thickens until about age 2 and then grows gradually thinner into adolescence as the brain matures. The new study, one of the largest to investigate cortical thickness in autism, aligns with others that indicate this trajectory differs in people with the condition.

The findings suggest that brain structure does not change in a uniform way in autism, but instead varies with factors such as age, gender and IQ, says lead researcher Mallar Chakravarty, assistant professor of psychiatry at McGill University in Montreal, Canada.

These variations could help explain the inconsistent findings about cortical thickness and autism seen in earlier studies that did not consider such factors, says Christine Wu Nordahl, associate professor of psychiatry and behavioral sciences at the University of California, Davis MIND Institute, who was not involved in the work.

“I think this is the type of study we need to be doing as a field, more and more,” she says.

After discarding scans marred by head movement in the scanner, they analyzed brain scans of 129 autistic and 355 typical girls and women, and 362 autistic and 481 typical boys and men. All participants were aged 2 to 65 years, though there were few samples from children under 5 and adults over 40.

The team identified several regions of the cerebral cortex that are thicker in people with autism than in typical people; all of these regions have previously been associated with autism. They include the frontal cortex, which is involved in planning and social behavior; the superior temporal cortex, which helps integrate sensory inputs; and the posterior cingulate cortex, which plays a role in emotion regulation.

Past work, including a large study published in 2018, reported cortical thinning as well as increased cortical thickness in various brain regions of autistic people. Here, the researchers saw no cortical thinning when they analyzed only the quality-controlled brain scans, Chakravarty says.

However, when they added back in some of the poorer-quality data, they found cortical thinning in the regions pinpointed in the previous work. Those regions are especially susceptible to motion artifacts, suggesting that the results were based on flawed data, he says.

The difference in cortical thickness between autistic and typical people is greatest in children aged 8 to 10, the team found. “It kind of disappears after adolescence, in the early-to-mid 20s,” Chakravarty says.

The affected brain regions tend to be thicker in autistic people with an IQ score of 80 to 110 compared with typical people who have a similar IQ, the researchers found. They saw little difference among people with an IQ of 120 or higher.

Increased cortical thickness is also more pronounced in autistic girls and women than in autistic boys and men, and it affects a different set of brain regions. Girls and women with severe traits, as determined by a widely used test called the Autism Diagnostic Observation Schedule, tend to have the thickest cortex.

“There’s very limited information regarding what the brain anatomy of autism looks like in females” because fewer girls are diagnosed with the condition than boys, Chakravarty says. The sex differences the researchers saw may reflect the fact that girls who are diagnosed tend to have more severe traits, he says.

The findings also support the idea that the pruning of connections between neurons during development may be less efficient in autistic people than typical people, Chakravarty says, which may explain a thicker cortex.

The findings fit well with previous work showing that brain volume is increased in children with autism, says Antonio Hardan, professor of psychiatry and behavioral sciences at Stanford University in California, who was not involved in the study.

However, to really determine how cortical thickness changes with age, researchers will need to scan the same individuals at multiple time points, he says.

Although hundreds of scans were included in the study, Hardan says a larger sample would be needed to fully understand how cortical thickness relates to individual traits. “I project we will need maybe 10,000 scans to be able to have consistent results with regard to metrics such as the effect of gender, IQ and severity.”

The researchers are now re-examining the MRI scans to look for additional anatomical differences, such as the amount of insulation material, called myelin, in the cortex of people with autism.