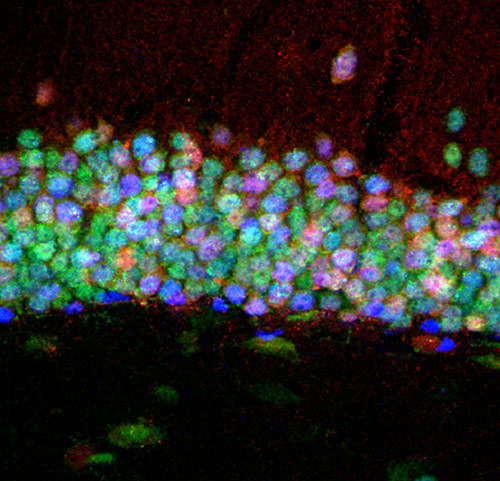 Quick switch: In neurons stimulated by electrical bursts (red), more than 1,500 genes are either methylated or demethylated.

Quick switch: In neurons stimulated by electrical bursts (red), more than 1,500 genes are either methylated or demethylated.

A brief burst of electrical stimulation can induce widespread changes to the chemical markings on DNA that affect its expression, according to a study published 28 August in Nature Neuroscience1.

The finding upends the conventional wisdom that methyl groups added to DNA are permanent fixtures in a mature cell. These so-called epigenetic changes, which help switch genes on and off, have been implicated in a host of diseases, including autism.

The new study shows that in neurons in the adult mouse brain, brain cell activity can cause rapid methylation or demethylation at more than one percent of DNA methylation sites.

“These epigenetic marks are not as stable as we used to think,” notes lead investigator Hongjun Song, professor of neurology and neuroscience at Johns Hopkins University in Baltimore. “They’re very dynamic and can be changed by neuronal activity.”

Many of the sites that change their methylation status with activity are located on genes tied to the synapse, the junction between neurons, and to autism, such as NLGN3 and GRIP1.

“I’m really excited about the fact that these sites could change, and that this might be where we could be looking for [relevance to] autism spectrum disorders,” notes Janine LaSalle, professor of medical microbiology and immunology at the University of California, Davis, who was not involved with the new study.

In July, LaSalle and her colleagues published a genome-wide map of DNA methylation in human neurons.

Several lines of evidence implicate epigenetics in autism. For example, GADD45B, a gene needed for demethylation, is overexpressed in the brains of people with autism compared with controls.

Similarly, the autism-related disorder Rett syndrome stems from a mutation in MeCP2, which encodes a protein involved in DNA methylation. And last year, researchers analyzing blood cells found that many genes are methylated differently between identical twins of whom only one has autism2.

Humans have scores of cell types, nearly all emerging from the same DNA blueprint. Methylation is the crucial difference: A distinct subset of genes is shut on or off in neurons, for example, compared with kidney cells or blood cells. “Methylation marks are important for cell identity and so they don’t really change,” Song says.

Over the past few years, however, researchers have found a handful of places in the genome where DNA methylation does change. For example, in 2009 Song’s team showed that stimulation of neurons can demethylate the genes FGF1 and BDNF in the mouse hippocampus, a region important for learning and memory3.

But no one knew the full extent of this so-called activity-dependent regulation. The mouse genome has some 21 million CpG sites, at which methylation occurs. In the new study, Song’s team analyzed 219,991 of these sites in neurons in a part of the mouse hippocampus before and after electroconvulsive stimulation, a brief electrical jolt that is sometimes used to treat people with severe depression.

The researchers found 1,892 sites where activity spurred methylation and 1,158 sites where it triggered demethylation — a total of 1.4 percent of all CpG sites.

“The adult brain architecture may be a lot more plastic or adaptable than previously thought,” notes Valerie Hu, professor of biochemistry and molecular biology at Georgetown University in Washington, D.C.

The researchers also showed that it’s not only electrical stimulation that can cause methylation changes — exercise can do it, too. They repeated the analysis after giving the mice three days of free access to a running wheel and found that 32 of 48 sitesshowed the same methylation changes after running as they did four hours after the electric shock.

These findings suggest that abnormal methylation patterns could be restored with drug or behavioral interventions, Hu says.

Part of the reason no one had found these changes before is because “they’re not in the regions where people would normally look,” Song says. Previous studies zoomed in on promoters, regulatory regions just upstream of genes. But this study found that most changes happen either in the middle of genes or in non-coding regions of the genome.

“This raises a lot of questions about what exactly they are doing there, and we don’t know,” Song says. The location is important because methylation at the promoter tends to silence genes, whereas in the middle, it can boost expression.

Although this is a much broader analysis than has been attempted before, it’s probably an underestimate of the number of sites that are sensitive to neuronal activity, says Hu.

“They really only looked at a sliver of all the CpG sites,” LaSalle notes. “You get the feeling that there probably were a lot of genes that weren’t sampled at all.” What’s more, even though most genes have 50 to 100 CpG sites, the study sampled only one site per gene.

It would be interesting to perform the same analysis on mouse models of autism, especially those based on genes that have not been linked to the synapse, LaSalle says. It could be that some autism genes cause methylation changes that in turn affect synaptic genes.

Song says he plans to analyze methylation changes in mouse models of autism, schizophrenia and other mental disorders.

“There are so many different things we can look at,” Song says. “I didn’t want this many targets. It was a lot more than we bargained for.”