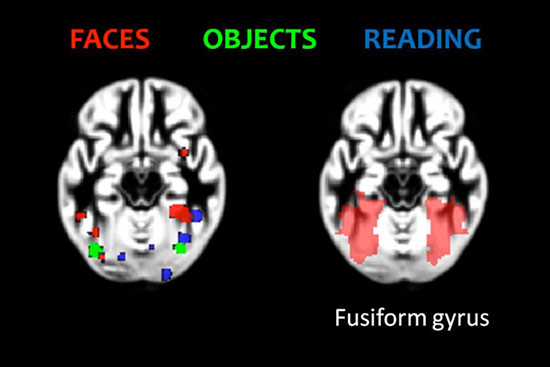 U. of Montreal Group think: An analysis of 26 imaging studies has found that people with autism show high activity in the fusiform gyrus, a brain region linked to face recognition.

Individuals with autism use more brainpower in regions linked to visual perception, and less in those related to planning thoughts and actions, compared with healthy controls, according to a multi-study analysis published today in Human Brain Mapping1.

The report is getting mixed reviews from other experts, however, who say it presents an oversimplified interpretation of the data. Some also take issue with how the researchers chose which studies to include in their analysis.

The analysis is based on data from 26 functional magnetic resonance imaging (fMRI) studies from many independent laboratories over the past 15 years.

Autism is often defined as a social disorder. Instead, “we may define autism as a condition characterized by a brain reorganization in favor of perceptual experience,” says lead investigator Laurent Mottron, professor of psychiatry at the University of Montreal.

The hotspots of high activity in people with autism appear in the fusiform gyrus, the so-called ‘expertise’ region in the back of the brain involved in distinguishing faces, according to the study. Those results contradict the popular idea that people with autism have trouble recognizing faces, Mottron says.

“We can say that this is the place in the autistic brain where they display the highest level of superiority and activity in comparison to non-autistics,” Mottron says.

There is robust evidence suggesting that people with autism use the visual cortex in unusual ways. But more activity does not necessary mean superior abilities, some experts say.

“There are many different reasons why a clinical group would show more activation in a particular part of the brain,” says Ralph-Axel Müller, professor of psychology at San Diego State University. “It could very well be that processing is actually less efficient and they require more resources in that area to perform a particular task.”

For example, in one of the studies included in the new meta-analysis, Müller’s team reported that when individuals with autism decide what a word means — such as whether a hammer is a tool — they show more brain activity in visual cortex than do controls2. In that study, more activity correlates with a higher error rate on the task.

There could also be other explanations for the results. For example, the ‘weak central coherence’ hypothesis3, first proposed by Uta Frith, says that because their brains don’t properly integrate different types of information, people with autism think about the world in small parts and don’t grasp ‘the big picture.’

Anecdotal reports and some studies have claimed that people with autism have eagle-eyed vision. For example, compared with healthy controls, some individuals with autism tend to be faster and more accurate when asked to find a hidden shape embedded in a complex image4 or to rotate objects in their minds5.

Not everyone with autism has keen perceptual abilities, however, and those who perform well on these tasks may not do well outside of the lab. “Even in these very able people, life is really rather hard for them,” Frith says. “They can be overwhelmed by the visual input they’re getting.”

In the new study, the researchers aimed to understand the basis of these curious visual abilities. They included imaging studies that used a variety of visual tasks, from participants looking passively at letters to making judgments about the mental state of animated shapes. “We didn’t care what the subject was doing or what he was looking at, as long as he was looking at something while he was in the scanner,” Mottron says.

Because the autism imaging literature is vast, “it’s hard as a researcher to make sense of all of the different conflicting reports,” says Elizabeth Aylward, associate director of the Center for Integrative Brain Research Seattle Children’s Research Institute. “It’s a real benefit to have somebody pull all the studies together so we can figure out what might be the more common findings.”

The new study averaged within-group data from 357 individuals with autism and did the same for data from 370 healthy controls. Using a technique called ‘quantitative meta-analysis’6, the researchers then made a between-group comparison of the combined data sets.

Mottron claims that, in essence, any difference between the autism and control groups that survives this cross-lab, cross-method comparison must be robust. “A meta-analysis gives you something with a truth level [that is] much superior to a single study,” he says.

Others disagree, however, pointing out that it’s difficult to interpret results that combine so many studies.

In this case, for example, there are both male and female participants, ranging in age from 9 to 35 years old. They also have several different autism diagnoses, including Asperger syndrome and pervasive developmental disorder-not otherwise specified.

These variables can greatly influence brain activity, notes Kevin Pelphrey, associate professor of child psychiatry at the Yale Child Study Center. “Early in development, greater activation can mean less expertise and more effort being expended, but in older people, it could mean more expertise and less effort,” he says.

The study’s interpretation could also be skewed by the studies the authors included in the analysis. Because of the technique they used, one of their criteria was that papers had to report within-group differences. “This is a huge source of bias,” Pelphrey says, because many of the most interesting papers in the field only report between-group differences.

Similarly, each study had to be a whole-brain analysis, rather than focused on activity changes in a particular region. This ruled out, for example, two well-known studies that found the lower activity in the fusiform gyrus in individuals with autism compared with controls7,8.

“Given how they chose their studies, they couldn’t have found anything but what they found,” Pelphrey says.