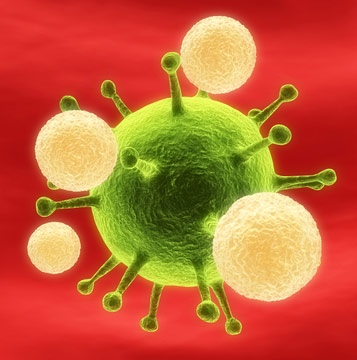 T-reg trouble: One mouse model of autism has a dearth of regulatory T cells, which help keep the immune response in check.

An altered immune system can cause autism-like behaviors, suggests a study published 31 July in the Proceedings of the National Academy of Sciences1. The researchers found that a bone marrow transplant, which restores the animals’ immune system, alleviates some of their symptoms, including anxiety and repetitive behavior.

Such transplants are too dangerous for treating people with autism, but the findings suggest other treatments targeting immune cells, the researchers say.

When confronted with foreign cells — for example, when infected with a virus — the body typically activates immune cells called T cells to release signaling molecules called cytokines. A different set of T cells, called regulatory T cells, then keep that immune response in check by suppressing the activated T cells.

In the study, researchers injected pregnant mice with a mock flu virus that sets off their immune response. The offspring carry overly responsive T cells and have too few regulatory T cells throughout their lifetime, the study found. These two things together point to an immune system that’s overly reactive.

The findings are provocative because several lines of evidence, including studies of postmortem brain tissue, cerebrospinal fluid and blood, suggest that some individuals with autism have an overactive immune system that leads to high levels of inflammation. One study has also reported that some children with the disorder have a dearth of regulatory T cells in their blood2.

“It was kind of amazing that [the mouse’s] immune system is altered permanently and that some of these changes overlap things seen in autism,” says lead investigator Paul Patterson, professor of biology at the California Institute of Technology.

A growing number of researchers are looking at the immune systems of individuals with autism and their mothers in hopes of finding the biological underpinnings of the diverse disorder. This work has discovered a range of significant, if still mysterious, associations.

Patterson has studied the link between maternal infection and autism for many years. His hypothesis is supported by decades of epidemiological data showing that women who are pregnant during flu epidemics have an increased risk of having a child with autism or schizophrenia3.

The animals also have abnormal levels of several inflammatory cytokines, such as interleukin-10, interferon gamma and granulocyte-macrophage colony-stimulating factor, Patterson and his colleagues reported last month4. The researchers measured levels of 23 different cytokines in different brain regions at various points of development. Patterson and others have previously shown that surges of another cytokine, interleukin-6, are a key part of the maternal immune response.

In the new study, his team first characterized the immune systems of the adult offspring, finding half as many regulatory T cells in the spleen and gut lymph nodes compared with controls. The offspring also show overly reactive T cells, releasing significantly more cytokines in response to infection than cells from normal mice do.

“What [Patterson] showed beautifully is that overall the immune system is malfunctioning, and that’s probably on many, many levels,” says Jonathan Kipnis, associate professor of neuroscience at the University of Virginia, who was not involved with the work.

It’s not yet clear what aspect of immune dysfunction is important for autism. “They looked at T-regs, but there are many other immune cells that they didn’t look at,” Kipnis says.

In a key experiment, Patterson’s team wiped out the animals’ immune systems with radiation and replaced them with bone marrow from normal mice. The procedure curbed the high anxiety and repetitive behaviors.

This suggests that an abnormal immune profile causes at least some aspects of autism, rather than being a consequence of the disorder, experts say.

The bone marrow transplant “is the biggest piece for me,” Kipnis says. “It shows that the behavioral issues are immune-mediated and also reversible.”

The findings jibe with a study Kipnis published earlier this year of a mouse model of Rett syndrome, an autism-related disorder characterized by intellectual disability, language delay and breathing problems.

That work found that a bone marrow transplant increases the lifespan and alleviates respiratory symptoms of the Rett mice. It also suggested that immune cells in the brain, called microglia, are the key players driving the brain-immune connection.

Still, the specific mechanisms underlying the transplants are unknown. Irradiating an animal is a drastic step with many consequences. For example, it can change the production of stem cells in the gut, which could in turn affect behavior, Patterson says.

Although many details must still be nailed down, Patterson says these immune studies could lead to new treatments for autism and related disorders. He points to a small but rigorous clinical trial of 40 children with autism published in June.

Unfortunately, some parents use these new immune studies to justify extreme treatments, notes Judy Van de Water, professor of internal medicine at the MIND Institute of the University of California, Davis.

Van de Water says she knows families who, after hearing about the Rett study, traveled to Mexico or Panama to receive ‘bone marrow restoration’ — a procedure in which children receive new bone marrow but don’t go through radiation first. “It’s incredibly expensive with very little foundation in science to back it up,” she says.

It’s important to remember, she says, that an altered immune system doesn’t underlie every case of autism. Although some children have excessive inflammatory responses, for example, others show abnormally low immune responses or no immune problems.

Researchers should measure immune molecules in individual children and use those profiles as a guide for treatments, she says. “That’s what we’re trying to do now — to figure out what profiles would benefit from what interventions.”