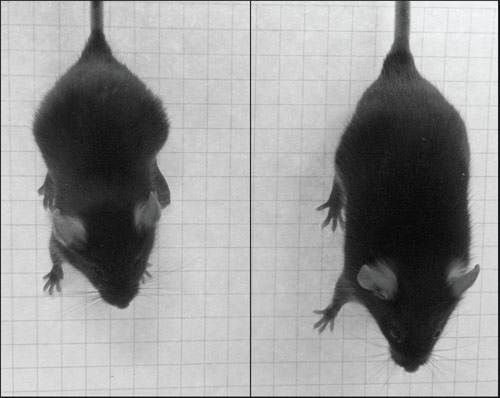 A bone marrow transplant from healthy mice to those lacking the MeCP2 protein, which causes Rett syndrome in humans when mutated, extends lifespan and alleviates symptoms of the disorder, according to research published online 18 March in Nature1.

Researchers found that microglia, which take root in the brain after the transplant, are the most important component of the treatment. These cells are known to act as scavengers that clean up cellular debris, but recent research suggests they also have other roles, including influencing neural transmission and development of the synapse, the junction between neurons.

Rett syndrome is a rare disorder caused by deletion or mutation of the X-linked MeCP2 gene and occurs almost exclusively in females. Symptoms emerge around 6 to 18 months of age and include breathing problems, intellectual disability, seizures, language deficits and other autism-like impairments.

Mice in which the MeCP2 gene has been knocked out in all or a subset of cells mimic many of the features of Rett syndrome.

Following treatment, abnormal breathing patterns and apnea, a temporary interruption in breathing seen in both MeCP2 knockout mice and children with Rett syndrome, are diminished in the knockout animals. Although untreated mice are much smaller than controls, the treated ones grow to almost normal size and become more active than their untreated counterparts, the study also reports.

“We did not expect to see such a huge effect on mice,” says Jonathan Kipnis, associate professor of cellular and molecular neuroimmunology at the University of Virginia and senior scientist on the study. “Many of the neurological symptoms of the disorders have been arrested or alleviated by the transplant.”

The treatment also enhances lifespan. Male mice without MeCP2 typically live only 8 or 9 weeks, but the longest-living treated mouse in the study is now a year old. “That’s encouraging, because it means we can arrest the symptoms for a long time,” says Kipnis.

Previous research has shown that the symptoms of Rett are reversible, at least in rodents. Expressing the MeCP2 protein in knockout mice alleviates neurological symptoms in both juveniles and adults2.

And though Rett syndrome was long thought to be a disorder of neurons, a handful of studies in the last few years suggest that the MeCP2 protein plays an important role outside of those cells.

In 2009, scientists showed that MeCP2 is also present in glia, cells that support and communicate with neurons. What’s more, expressing the protein only in glia can alleviate symptoms in MeCP2 knockout mice3.

Kipnis’ study shows that microglia, a type of glial cell that functions as part of the immune system, play perhaps an even more important role in the disorder. Microglia are derived from myeloid cells, which are found in bone marrow.

“We approached Rett syndrome from an immune perspective and were not sure which cell would be relevant,” says Kipnis, whose previous work has shown that certain types of immune cells are vital for proper brain function.

Treatment alleviated a number of symptoms, but as Kipnis is careful to point out, it did not eliminate the disorder.

To determine which type of cells in the bone marrow were responsible for the improvements, researchers irradiated the entire animal except for the head. Under these conditions, the animals’ original microglia, lacking MeCP2, still populate the brain, and there is no reduction in Rett symptoms.

“We know we need healthy cells to get into the brain to get the benefit,” says Kipnis.

They also mated knockout mice to animals that had the MeCP2 protein only in myeloid cells. The resulting offspring had fewer symptoms, showing that the presence of the protein just in these cells is sufficient to counter the disorder.

“The survival effect is dramatic,” says Ben Barres, professor of neurobiology at Stanford University in Palo Alto, California, who was not involved in the study. “The question is, how are microglia doing this?”

Kipnis theorizes that microglia lacking MeCP2 don’t perform their cleaning function, and the accumulation of cellular debris in the brain sickens neurons. “We think the new microglia are providing a healthier environment,” says Kipnis.

But Barres says that the microglia may be playing a much more central role, such as regulating communication among neurons. His lab has shown that glia, most notably a subtype of glial cells called astroctyes, play a central role in synapse development, and is now starting to explore whether that function is perturbed in neurodevelopmental disorders, including autism-linked disorders.

Other recent research has shown that microglia prune synapses, a process that is essential for normal brain development4.

Bone marrow transplants are unlikely to be tested in children with Rett anytime soon, given that the procedure is highly invasive and typically reserved for cancers and other life-threatening diseases. Death rates from the treatment range from 10 to 70 percent, depending on the disease and relatedness of the bone marrow donor.

“I am extremely concerned about the potential rush to utilizing this technique in people without reproducing the data in a separate, independent laboratory,” says Jeffrey Neul, associate professor of pediatrics and molecular and human genetics at Baylor College of Medicine in Houston, Texas, who was not involved with the work. “My major concern is that unscrupulous physicians will immediately provide bone marrow transplantation to children with Rett syndrome outside the framework of a clinical trial and without the appropriate safety measures and the ability to determine efficacy.”

But the new findings raise the question of whether a child with Rett syndrome who needs a bone marrow transplant for other medical reasons would also show improvement in Rett symptoms.

Monica Coenraads, executive director of the Rett Syndrome Research Trust, says she has been searching for such a child since she first heard about Kipnis’ research.

She learned of one child in Europe who underwent a bone marrow transplant to treat leukemia and who later died from the disease. According to anecdotal reports, the child’s communication ability improved after the transplant.

“The medical community involved with her care was concentrating on curing her leukemia, so no one looked specifically at Rett symptoms before and after, but the results are intriguing,” says Coenraads.

Kipnis aims to translate the finding into clinical therapies by better understanding the mechanism by which microglia help the brain. He points out that targeting the immune system is often much easier than directly targeting the brain.

“Perhaps there are small molecules that can mimic the effect,” he says. Or maybe the healthy cells in girls with Rett syndrome, which have one normal copy of the MeCP2 gene, can be coaxed to work better.

Kipnis also plans to explore the potential health benefits of microglia beyond Rett syndrome. His group will test bone marrow transplants in mouse models of fragile X syndrome, a neurodevelopmental disorder that is sometimes linked to autism, and other disorders that have a robust mouse model.

Whether microglia play a role in autism is not yet clear. Previous research has found an excess of activated, or enlarged, microglia, an indicator of inflammation, in postmortem brain tissue from children with autism.