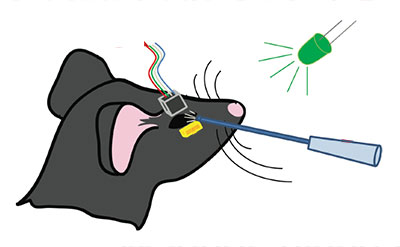 Face puff: Some mice that model autism have trouble learning to blink in anticipation of getting air in their eyes.

An eye test that reveals defects in the cerebellum — a brain region that integrates sensory information to fine-tune movement — may help researchers home in on brain circuits disrupted in autism, according to unpublished findings presented Monday at the 2013 Society for Neuroscience annual meeting in San Diego.

“We wanted to use all the work that people have done in basic neurobiology to start asking about the exact circuit deficits in mouse models of autism,” says lead investigator Samuel Wang, associate professor of molecular biology at Princeton University.

At the 2012 Society for Neuroscience annual meeting in New Orleans, the same team showed that mice lacking the autism-linked genes CNTNAP2 or SHANK3 have abnormal reactions to a test that links sensory processing to motor function.

In the test, the researchers first train the mice to expect a puff of air in their face following a green light. After they learn the association, the mice start to partially shut their eyes in response to the light. The researchers detect eye movement with a magnet glued below the mouse’s eye and a magnetometer placed above it.

To blink appropriately, mice need to integrate information about the two kinds of stimuli, the air and the light, and then translate this learning into movement. Last year’s study found subtle differences in this response between the CNTNAP2 and SHANK3 mutant mice.

To follow up on this observation, the researchers tested two more autism-related mouse models: those with a mutation in the Rett syndrome gene, MeCP2, and those with a duplication of the 15q11.13 (dup15q) chromosomal region, which includes the UBE3A gene.

The MeCP2 and SHANK3 mutant mice both show defects in their blinking response: When anticipating the puff of air, they close their eyes to a lesser extent and later than controls do. The SHANK3 mice also blink less overall than controls do.

In contrast, the CNTNAP2 and dup15q mutant mice blink normally, but they do so less frequently than controls do.

These results match what researchers know about each of these genes. MeCP2 and SHANK3 are primarily expressed in golgi and granule neurons, which send information to the cerebellum. The cerebellum uses these inputs to construct a response to stimuli, guiding its timing and size.

CNTNAP2 and UBE3A are primarily expressed in Purkinje neurons, a subset of cells in the cerebellum that send signals out to the cortex. These signals translate information into action, and in this way direct learning.

The researchers plan to test whether the differences in the affected circuits in the autism mouse models influence the social deficits seen in the mice.

Circuit-level differences may also explain the two-hit model of autism, which posits that multiple mutations may be needed to cause the disorder, says Wang. In this case, mutations in genes that affect different aspects of the cerebellum’s function may lead to autism.