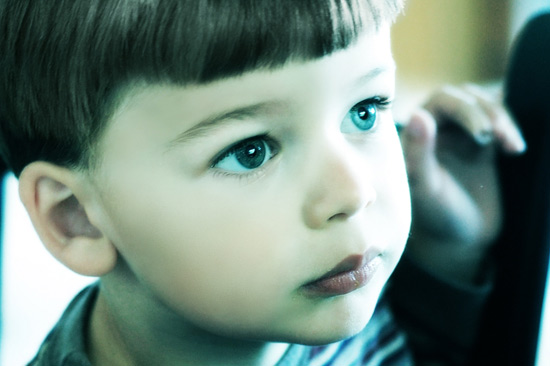 The eyes have it: Toddlers with autism blink just as often during emotional scenes as during dull ones.

How interested a child with autism is in a social scene can be determined in the blink of an eye — literally.

That was the message from scientists who yesterday presented a new method for measuring blink rate during visual perception tasks at the IMFAR 2010 conference in Philadelphia.

Eye-tracking studies of children with autism have shown that they view the world in unusual ways. For example, when they look at a face, toddlers with autism as young as 15 months tend to spend more time looking at the mouth or other peripheral features, rather than at the eyes.

Just because these children look at a particular spot does not mean they think it’s important, however.

“We wanted to develop a measure that would allow us to quantify, on a moment-by-moment basis, how engaged a person is in what they’re attending to,” says Sarah Shultz, a graduate student in the laboratory of Ami Klin at the Yale Child Study Center.

Shultz and her colleagues turned to blinking behavior to develop this measure. Studies over the past few decades have shown that blinking is an unconscious sign of the thinking process: people tend to refrain from blinking when they’re looking at something compelling.

The researchers tracked eye movements and blinks in 41 2-year-olds with autism and 52 healthy controls while the children watched a short movie of two toddlers on a playground.

Both groups on average blinked about five times per minute. But they differed significantly in how their blinking lined up with the content of the movie.

Healthy toddlers refrained from blinking as they watched scenes with high emotional content, such as when the toddler-actors fought about a toy. Toddlers with autism, in contrast, were just as likely to blink during emotional scenes as during dull ones.

Blinking is unconscious, automatic and non-invasive, making it ideal for use with young children. But, as one attendee at the conference pointed out, the method doesn’t have high temporal resolution — that is, because people blink only once every 12 seconds, they wouldn’t be sensitive to quick changes in a visual scene.

Shultz says that, ideally, blink rate could be combined with other measures of emotional response. For instance, measuring heart rate or electrical resistance of the skin can reveal extremely fast changes in emotional response, but, unlike the blink rate, those can skewed by unrelated environmental factors, such as air temperature, hormonal changes or digestion.

“We’re very excited about the future potential of this tool,” Shultz says.