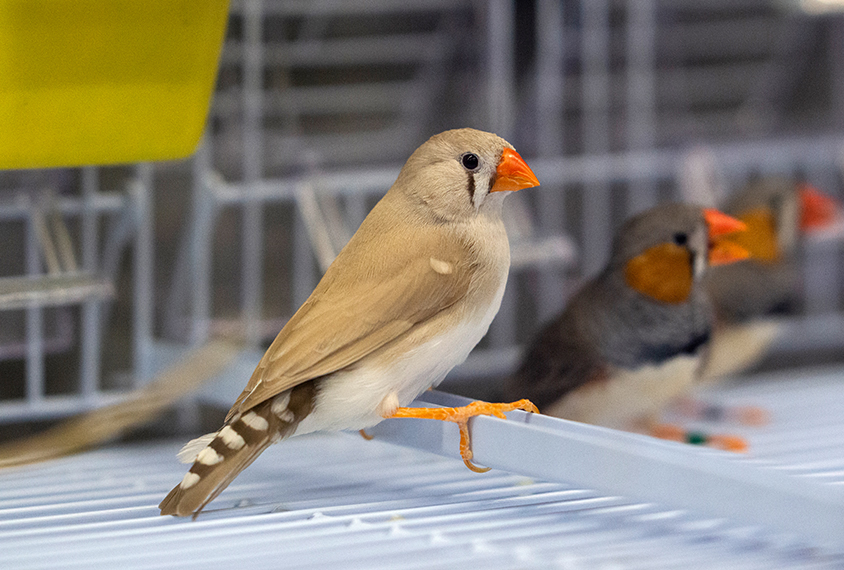 Language link: Zebra finches and other birds that learn songs carry mutations near genes that are often mutated in autism.

Genes that appear to play a role in some birds’ ability to learn songs are frequently mutated in autistic people, according to a new study.

The findings show the value of studying the evolution of specific traits in other species, says Sarah London, associate professor of psychology at the University of Chicago, who was not involved in the work. “It’s a powerful use of comparative biology. This is work that could not be meaningful if done in the standard lab rodent models.”

Babies learn to speak by listening to and mimicking sounds made by the people around them. This kind of ‘vocal learning’ is found in only a few other species, including dolphins, whales, bats, songbirds, hummingbirds and parrots.

To understand the origins of vocal learning, the researchers scanned the genomes of 33 bird species for ‘accelerated regions’ — sequences that are similar among song-learning birds and have more genetic changes than those of birds that lack vocal learning, suggesting those regions contributed to the skill’s evolution.

Both people and avian vocal learners share patterns of differential gene expression in speech and language areas of the brain, the researchers showed in 2014 — patterns not seen in birds or mammals that don’t imitate sounds. The new work reveals that accelerated regions linked to vocal learning in birds occur in noncoding areas that regulate those same genes — many of which are often mutated in autistic people.

The findings could help researchers better understand the functions of autism-linked genes that might contribute to language difficulties, says lead investigator Erich Jarvis, professor of neuroscience and genomics at Rockefeller University in New York City.

“We would learn a lot about not only them, but about our own selves, including health-related issues,” Jarvis says.

The researchers identified 3,608 accelerated regions in songbirds, as well as 3,400 in parrots and 1,795 in hummingbirds.

The regions in songbirds and parrots differed from those in other birds, specifically in noncoding portions of the genome that control genes involved in speech in people, including FOXP2 and MEF2C, both of which are linked to autism.

Another 64 regions — many of which are located near FOXP2 and MEF2C or another autism-associated gene, NR2F1 — are accelerated in both vocal-learning birds and in people. And many genes implicated in syndromic forms of autism overlap with genes located near an accelerated region in songbirds, Jarvis and his colleagues found. The regions are linked specifically to genes that are mutated in autistic children who are minimally verbal, the researchers found in an unpublished analysis, Jarvis says.

The findings suggest that those particular genes evolved for spoken language, and that mutations in them lead to language difficulties in people, Jarvis says.

“We haven’t proven that,” he says. “But certainly the correlation is there and pretty striking.”

The genes regulated by accelerated regions in the avian vocal learners also overlap with a set of genes that is accelerated in people compared with other vertebrate species, Jarvis says.

The findings were published in Genome Research in October.

It’s possible the strategy could be used to identify genes that are associated with specific autism traits, Jarvis says, providing targets for genetic screens that could help clinicians identify the best therapies for a given person early in life.

But researchers should be cautious about assuming the genes contribute to language similarly in birds and people, says Emily Casanova, research assistant professor of biomedical sciences at the University of South Carolina in Greenville, who was not involved in the work. Some consider language an “emergent property” — similar to consciousness — that may develop in ways specific to brain structure, she says, and birds’ cortical structure is different from our own.

“It may be relevant to autism, but at the same time it may be something unique to birds,” Casanova says. “It has been such a long time since we have had a common ancestor.”

The study lays a path for researchers to move beyond known autism-related genes and better understand how other parts of the genome contribute to complex behaviors such as language, London says.

“That’s why this study is — it seems like maybe a strange word — but I would say hopeful,” she says. “It points the way forward to new avenues of investigation that can be tapped by a community of people to start breaking down these different kinds of biological contributions to behavior.”

The researchers next plan to use animal models to study the genes that seem to play a role in minimally verbal autism, Jarvis says.