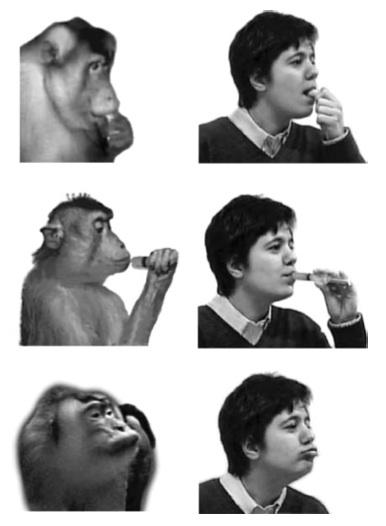 How do I ape thee: Children with autism rely on ‘action-constrained’ neurons to perceive others’ actions, scientists say.

High-functioning children with autism may understand another personʼs intention when, for example, that person reaches for a glass of water ― a simple, goal-directed task ― without help from the mirror neuron system, according to research reported Tuesday at the Society for Neuroscience meeting.

Some researchers have proposed that mirror neurons ― which fire when a person either performs or observes a specific action ― are impaired in some people with autism, and that this deficiency underlies the trouble they have in relating to others.

But, at least during motor tasks, the inability of people with autism to understand the intentions of othersʼ actions could instead reflect a deficit in their ‘action-constrained neuronsʼ, a group of cells found in the parietal lobe, a brain area responsible for integrating sensory information.

Many of these action-constrained neurons display mirror neuron-like properties, and fire in response to specific combination of actions and goals, such as the grasping of food in order to eat, according to Giacomo Rizzolatti, professor of human physiology at the University of Parma in Italy.

For the current study, using an electromyograph instrument, which records electrical activity triggered by muscle activation, Rizzolattiʼs group found that when children with autism are asked to reach for food themselves, their mouth muscles tend to twitch strongly not when they reach or grasp the food ― as the muscles do in typical controls ― but only when they bring the food to their mouth, Rizzolatti reported.

The lack of muscle twitching through the duration of the process suggests that the children were unable to understand the series of tasks as part of one whole task, Rizzolatti said.

However, because they were still able to perform the simple task, he added, they may have used different circuits in their brains than those used by typically developing children.

Mirror neurons may still be important in autism, Rizzolatti said, but action-constrained neurons may help understand how people with autism perceive the motor actions of others.

For all reports from the Society for Neuroscience meeting, click here.