Autistic people may have trouble tuning out distractions 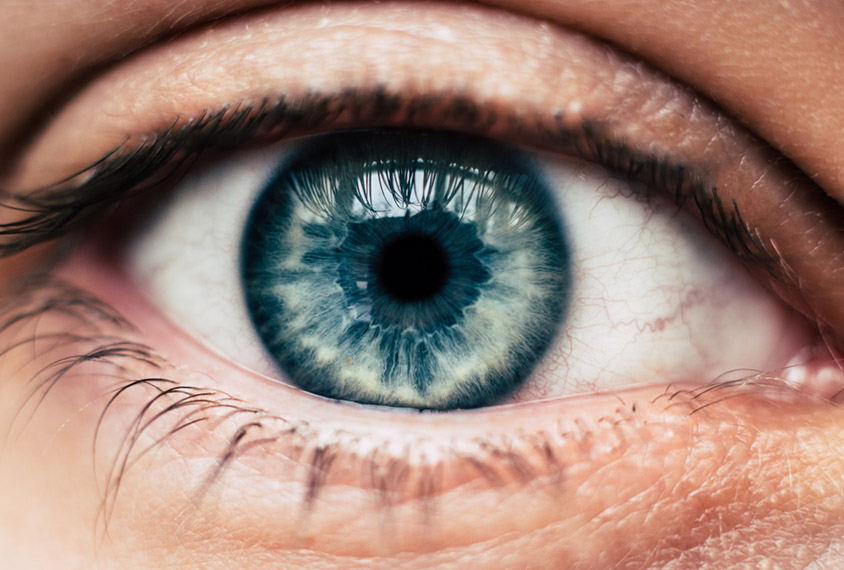 Wide-eyed: Pupil responses suggest autistic people may have less ability than controls to focus their attention.

Autistic people have atypical activity in a part of the brain that regulates attention, according to a new study1. The researchers measured pupil responses as a proxy for brain activity in a brain region known as the locus ceruleus.

Located in the brain stem, the region plays a key role in modulating activity throughout the brain, in part by controlling attention. It can broaden and narrow pupils to adjust how much visual information a person receives, for example.

Because of this, researchers can use pupil size to infer activity in the region and gauge a person’s focus on a task; a wider pupil indicates increased focus.

The locus ceruleus may also be key to regulating the balance between excitatory and inhibitory brain signals. Some research indicates this equilibrium is disrupted in autism, suggesting the region plays a role in the condition’s underlying biology.

In the new study, researchers compared autistic and typical people’s pupil responses when performing a task with and without a distracting sound. Typical people’s pupils grew larger when hearing the sound, suggesting a boost in focus directed by the locus ceruleus. By contrast, the pupils of autistic people did not widen, indicating they do not modulate their attention in the same way.

This might have profound consequences for autistic people’s sensory experience, the researchers say.

“If you can’t really attend to the most salient information, then you have a whole lot of stimuli bombarding you,” says lead investigator Marlene Behrmann, professor of psychology at Carnegie Mellon University in Pittsburgh, Pennsylvania. “This may contribute to the sensory hyperreactivity that you see in individuals with autism.”

The researchers asked 26 autistic adults and 26 typical adults to press a key when the same letter appeared twice in a row on a computer screen. The participants then repeated the task while a tone about as loud as a normal conversation played every 0.15 seconds. The researchers measured the participants’ pupil areas during both tasks.

Autistic participants and controls performed equally well on both tasks. When the tones played, however, the controls’ pupils expanded, suggesting that the locus ceruleus had directed their attention toward the computer and away from the sound. Autistic people’s pupil size largely stayed the same.

“It’s a way of shunting the distraction off to the side so you can focus in on the task at hand,” Behrmann says. “In individuals with autism, we do not see this difference.”

The difference occurred only when a person pressed a key — correctly or otherwise — meaning they were fully engaged in the task. When participants — either autistic or typical — missed a letter pair, their pupil areas stayed the same.

The finding is in line with research showing the locus ceruleus is particularly important when a person makes a decision to act, Behrmann says, and supports the idea that the brain region is modulating excitatory and inhibitory signals.

The work was published in April in The Journal of Neuroscience.

The researchers controlled for the participants’ age, pupil size and medication use, including of drugs that might affect activity of the locus ceruleus, such as the antipsychotic aripiprazole and the antidepressant sertraline. (Among the autistic participants, 57 percent were taking such a drug, compared with just 4 percent of the controls.)

Experts not involved in the work caution that the findings need to be replicated to support the broader claims about the locus ceruleus’ role in autism.

The paper is a valuable contribution overall, and pupil response is a promising measure for autism research, in part because it can be used to compare results in people of different ages, says Terje Falck-Ytter, professor of psychology at Uppsala Universitet in Sweden.

But some elements of the study’s design make the results unclear, Falck-Ytter says.

Behrmann says the study was set up that way to create a baseline for the participants’ locus ceruleus activity. The fact that the autistic participants and controls both did the task in the same order but showed different results indicates the finding is not due to the order, she adds.

Other experts are enthusiastic about the paper’s contributions to researchers’ understanding of the underpinnings of attention in autistic children. The work could help tease out the complex relationship between autism and attention deficit hyperactivity disorder, says Judith Miles, professor emerita of child health and genetics at the University of Missouri in Columbia. About 59 percent of autistic children have attention deficit hyperactivity disorder, and it is often unclear which children might benefit from which therapies or medications2.

“I’m still not sure what ‘attention problems in kids with autism’ means,” Miles says. “Being able to separate those symptoms on the basis of neurological behaviors or neural mechanisms is really exciting.”