Autistic people do not shift attention based on social cues 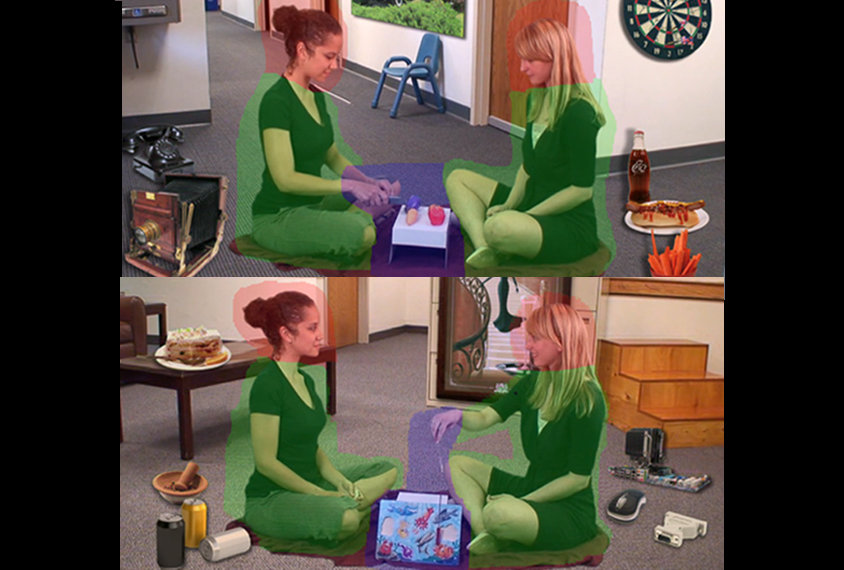 Looking up: Autistic people do not shift their gaze to where actors in a video are looking, either at an activity (top) or at each other (bottom).

The work adds to a growing understanding of what drives social attention in people with autism. It also points to a potential biomarker to evaluate autism traits across a person’s lifespan, the researchers say.

When people with autism look at images, they tend to spend little time looking at faces and other social stimuli, and are more likely to study a scene’s non-social elements, previous studies show. Some researchers say this difference may arise because, compared with their non-autistic peers, autistic people are less likely to glean information from social stimuli.

The new findings support that idea: Autistic and non-autistic children and adults watched short videos of two actors having a conversation while performing a basic task, such as cutting vegetables, and looking at each other or at the shared activity. Eye-tracking revealed that the non-autistic people shifted their gaze based on where the actors were looking, but the autistic people did not.

“It suggests that the same stimuli are useful in terms of distinguishing the groups,” even though the differences change with development, says Emily Jones, professor of translational neurodevelopment at Birkbeck, University of London in the United Kingdom, who was not involved in the study.

The researchers collected eye-tracking data from 122 people with autism and 40 non-autistic controls aged 6 to 63 years. They measured how much time the participants spent looking at the actors’ heads or bodies, the area where the activity was taking place or the background. Each participant watched four 20-second videos: two in which the actors looked at each other, and two in which the actors looked at the activity.

Non-autistic people spent most of their time looking at the activity when the actors fixated on the activity, and at the actors’ heads when the actors gazed at each other. This pattern suggests that by age 6, non-autistic people notice what others pay attention to and react accordingly, says study investigator Abigail Bangerter, project scientist in the neuroscience department at Janssen Research and Development in New Brunswick, New Jersey.

The autistic children and adults, however, did not shift their focus based on the actors’ gazes, possibly because they are less interested in trying to interpret the actors’ facial expressions, Jones says.

Regardless of whether they have autism, adults were more likely than children to look at the actors’ heads and less likely to look at the shared activity, suggesting that patterns of social attention change with development.

Bangerter and her colleagues did not find a link between participants’ gaze patterns and their social behaviors, as measured by two caregiver questionnaires, the Social Responsiveness Scale and a section of the Autism Behavior Inventory. The study was published in Molecular Autism in October.

One reason that performance on the task may not have reflected a person’s social behaviors is because those questionnaires take someone’s age and intelligence quotient (IQ) into account, says Peter Mundy, professor of education at the University of California, Davis, who was not involved in the study.

The autistic people in the study ranged in IQ from 60 to 136; no IQ information was collected for non-autistic participants.

“That probably made it difficult to see any correlation, since there’s so much variance,” Mundy says. And that variability could also be driving the different patterns of attention seen between the autistic and non-autistic groups, he says.

The task also may not accurately capture how people pay attention to others in the real world, Jones says. The field still needs a better understanding of what ‘social attention’ means in and out of the lab, she says.

Still, the task used in the study, which is part of a larger effort to identify biomarkers for autism, could prove useful “as a measure of treatment response in clinical practice or research,” Bangerter says.

Bangerter and her colleagues are exploring how clinical interventions shape the way autistic people direct their social attention. They plan to evaluate how well the eye-tracking task reflects the results of those interventions over time.