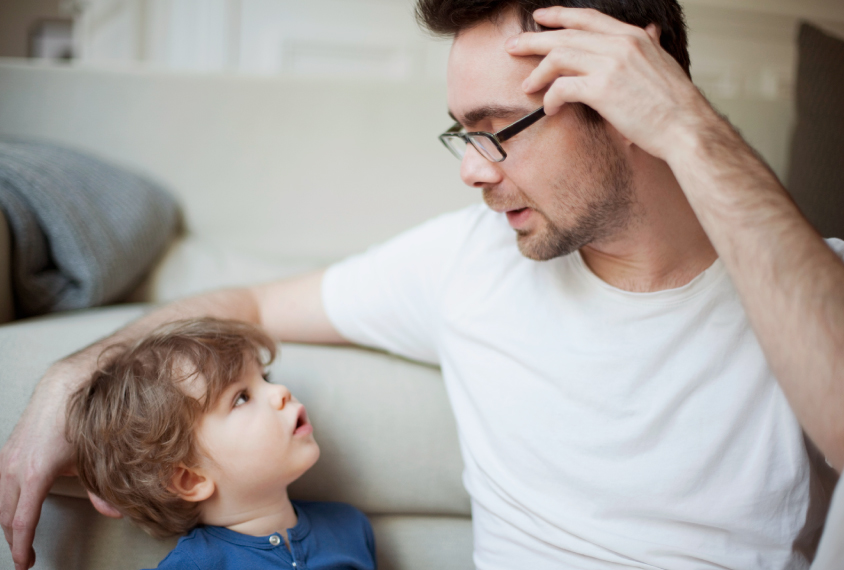 Language loop: Parents often respond to their autistic children’s language by simplifying their own.

Parents speak to their autistic children using fewer words and less complex sentences than do parents of typical children, which in turn shapes the children’s language skills, a new study suggests1.

The findings contradict the recommendations of some autism therapies, which ask parents to speak in simple sentences, says lead researcher Riccardo Fusaroli, associate professor of cognitive science at Aarhus University in the Netherlands.

Fusaroli and his colleagues tracked language learning from about age 2 to 5 in autistic and typical children. The two groups started out with similar language abilities.

As they got older, however, the autistic children became less talkative and used simpler sentences than the controls did. Their parents also began to use less complex language; over time, the parents’ language at one visit predicted that of their children at the next, and vice versa.

“Sometimes the children, especially if they have social impairment, might not show that they are engaged with the language,” Fusaroli says. “But from what we see in the data, it seems that they are actually learning from that.”

That parents’ speech affects autistic children’s language abilities is not a surprise: Decades of research has shown that to be true in typical development. But autism researchers have mostly focused on how the condition influences language learning.

The new study is powerful because it looks at how language use evolves simultaneously in parents and autistic children, and how each affects the other, says D. Kimbrough Oller, professor of communication sciences and disorders at the University of Memphis in Tennessee, who was not involved in the study.

“It’s very difficult research to do because it has to be done longitudinally,” he says. “They are really helping to open the door toward understanding this reciprocity, monitoring it across time and getting away from a simple cause-and-effect kind of model.”

The study is part of a long-term look at language development in children with autism. The researchers visited the homes of 67 preschoolers, 32 with autism and 35 controls, every four months for about two years.

The researchers first visited typical children when they were 20 months old, on average; they visited autistic children at an average age of 33 months so they could match the groups in language ability. A 2014 study showed that children with autism show the most variability in their ability to learn language between the ages of 2 and 6 years2.

The researchers recorded the parents playing with their children for half an hour and then analyzed the footage to tally the total number of words, and the number of unique words, that each child and parent used. They also measured sentence complexity by considering the number of word parts, or morphemes, in the participants’ sentences.

The parents of autistic children used slightly simpler sentences than the other parents at the outset, even though their children didn’t show significant language problems at that point. The parents’ behavior may result from their children’s apparent lack of interest in communication, Fusaroli says.

The parents of children who used increasingly complex language also tended to use more complex language themselves. In fact, the researchers found, the children’s speech at one visit predicted their parents’ speech at the next; this was true for children in both groups.

“This is the largest and most comprehensive study to date on the detailed influences of parent language [in autism],” says Helen Tager-Flusberg, director of the Center for Autism Research Excellence at Boston University, who was not involved in the study.

The findings may not apply to all children with autism, however, as all of the children in the study are verbal, and their parents all have at least a high-school education, Tager-Flusberg says.

The researchers did not measure the children’s receptive language — how well they understand speech, notes Gordon Ramsay, director of the Spoken Communication Laboratory at the Marcus Autism Center in Atlanta, Georgia, who was not involved in the study. Low scores on receptive language might explain why the parents tended to use less complex language, he says.

Fusaroli and his colleagues are continuing to analyze the data to score nuances of conversation, such as turn-taking and whether autistic children and their parents mirror each other’s word choices. They are also analyzing whether the children’s early language abilities predict their long-term outcomes. The children in the study are now teenagers.

The researchers plan to make the transcripts of these conversations available to other scientists for analysis with their own data.