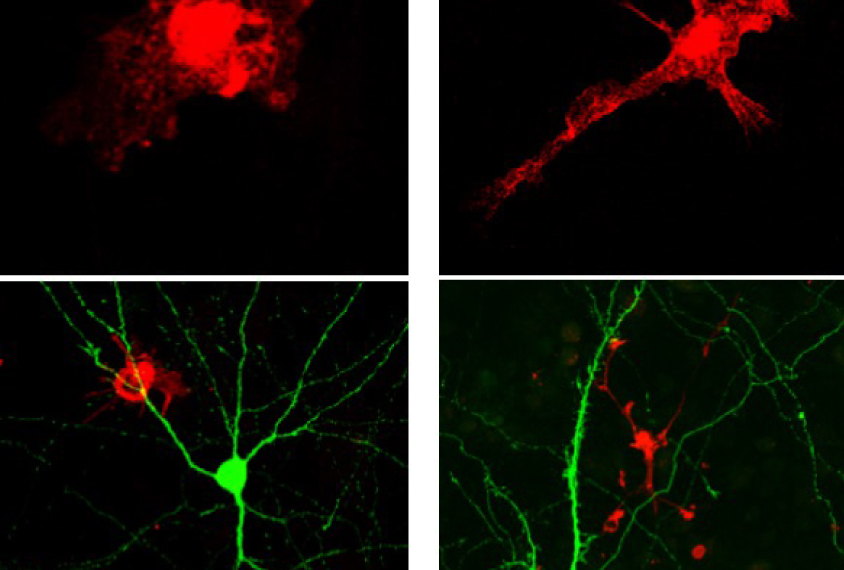 On guard: Microglia from male mice (left, red) assume a more active, blob-like appearance than those in females (right).

Two of the most reliable risk factors for autism are being male and being exposed to inflammation in the womb. At first glance, these may seem to be unrelated factors, but increasing evidence hints at a connection between them that involves microglia, immune cells in the brain.

Microglia spring to action in response to inflammation, ridding the brain of pathogens and cellular debris. They also sculpt brain circuits by trimming the connections between cells.

But microglia apparently function differently in male rodents than in females. They are more active in males and respond more vigorously to inflammation, new studies suggest — and this may make male fetal brains more susceptible to damage from inflammation.

“I think people are starting to appreciate that male and female microglia behave differently,” says Kathryn Lenz, assistant professor of psychology at Ohio State University in Columbus. “And that might mean [the males] are more perturbed by risk factors for male-biased disorders,” such as autism.

If the findings hold up in people, they may help explain why autism is about four times as common in boys as in girls. They may also solidify the link between autism and infection or immune conditions in the mother.

One of the new studies reveals that microglia from adult male mice express higher levels of genes involved in inflammation than do those from females1. The finding mirrors results from a 2016 study showing that male postmortem human brains express genes related to microglia at higher levels than female brains do2. The same study also showed that these genes tend to be highly expressed in the brains of people with autism.

The mouse work suggests that the differences seem to be at the level of individual cells rather than in the number of cells in males and females.

“If you take one male microglia compared to one female microglia, the male microglia is more likely to have elevated expression of these inflammatory pathways,” says Donna Werling, postdoctoral fellow in Stephan Sanders’ and Matthew State’s labs at the University of California, San Francisco.

Most of the cells in the male rodents are round and blob-like, with few of the protrusions that characterize resting microglia. It turns out that female microglia retain their sex-specific gene-expression profile even after the mice’s ovaries are removed, or after being transplanted into the brain of an adult male mouse.

The findings suggest that microglia’s sex-specific features are stable and independent of ovarian hormones.

However, the differences disappear when newborn female mice are exposed to a hormone surge that is thought to masculinize rodents3. This finding hints that the sex differences are established early in life.

The researchers also activated mouse microglia by blocking an artery supplying blood to the brain. This stroke damages a larger area of the brain in male mice than in female mice. A transplant of female microglia mitigates some of the damage in the males.

“To me, this is just another very strong piece of evidence that there is something inherently different in the male neuroimmune system,” says Margaret McCarthy, professor and chair of pharmacology at the University of Maryland in Baltimore, who was not involved in the work.

McCarthy’s team has unpublished evidence that microglia in the amygdala, an emotion hub in the brain, are more active in newborn male rats than in female ones. This may result in fewer star-shaped cells called astrocytes and dampens social-play behavior in male rats later in life.

Male mice also show signs of increased microglia activity when born to mothers raised in sterile conditions, according to a study published in January4. But paradoxically, the microglia in the male pups show diminished expression of immune system genes relative to microglia from female pups.

The discrepancy may be due to the environmental conditions in which the mice were housed — which can alter gene expression, says Florent Ginhoux, a principal investigator at the Singapore Immunology Network who co-led the study.

Two studies last year uncovered sex differences in microglia in the hippocampus, a brain region involved in memory. One of these studies suggests that male microglia respond more than female microglia to a chemical that mimics an infection5.

“It is a pretty consistent story,” says lead investigator Staci Bilbo, director of research at the Lurie Center for Autism at MassGeneral Hospital for Children in Boston. “Male microglia are more reactive to a diverse number of different inflammatory challenges that activate the immune system.”

One open question is how and why the sex differences in microglia exist at all.

A study of rats published in August offers one possible answer7. The study found that newborn male rats have more immune cells called mast cells than newborn females do in the preoptic area, a brain region that controls male sexual behavior. The male mast cells are also more active than those in females.

Treating newborn females with masculinizing hormones prompts their mast cells to release histamine, which activates nearby microglia. It also causes the animals to exhibit male sexual behaviors. Conversely, treating fetal males with a histamine blocker prevents masculinization of their microglia and diminishes their sexual behavior.

The findings suggest that immune signals from mast cells help establish sex differences in microglia early in life, at least in the preoptic area.