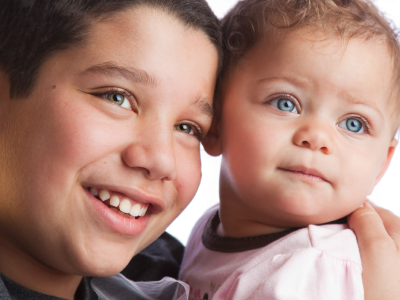 In families with more than one child diagnosed with autism, younger siblings appear to be more severely affected by the disorder, according to new data presented Tuesday at the Society for Neuroscience annual meeting in San Diego.

Working with data from the Autism Genetic Resource Exchange, researchers looked at sibling effects in more than 300 families that have more than one child diagnosed with autism. They compared the social and cognitive behavior of older and younger siblings with the disorder.

When the researchers looked at the children’s scores on the Social Responsiveness Scale, a 65-question instrument that measures social impairment, they found that the younger siblings are also more socially impaired.

The researchers controlled for both age and gender in the study, comparing the children’s scores at the same age and in same-sex pairs.

There are a number of possible explanations for the birth order effect phenomenon: epigenetic, environmental, immunological, or possibly some combination of the three.

“My own bias is that this dosage effect is due to a maternal immune response that affects fetal development, and may impact younger children more heavily,” Martin says. “The original antibody titer is still there, but you have increased titer when the immune system is reactivated in the second pregnancy.”

The findings of the study are somewhat counter-intuitive, because when a family already has one child with autism, the second affected child is usually diagnosed at a younger age. “You would expect a rescue effect,” due to early diagnosis and treatment, he says. “You wouldn’t expect a more severe effect.”