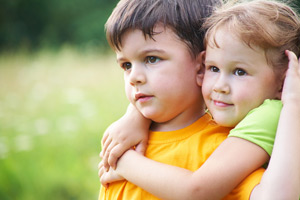 Birth order: Environmental factors may explain why later-born children with autism score lower on intelligence tests than their older siblings with the disorder.

In families that have more than one child with autism, children who are born later have lower intelligence scores than their older siblings do, according to research published 11 November in PLoS ONE1.

The findings follow two studies published over the past two years suggesting that in families with autism, second-born children, particularly those born soon after an older sibling, have a greater risk of developing the disorder than those born later. The new study also found that the differences in severity are most significant when the children are born within two years of each other.

The reasons for this pattern aren’t yet clear, but they suggest an environmental contribution, such as maternal infection during pregnancy.

There appears to be a “dosage effect,” says lead investigator Loren Martin, professor of psychology at Azusa Pacific University in Azusa, California. “The first sibling has a lighter dose, so to speak, or less exposure than the second or later-born sibling.”

The researchers looked at data from the Autism Genetic Resource Exchange, a repository of genetic and other information, from more than 300 first- and second-born children diagnosed with autism.

Analyzing the results of various intelligence and behavior tests, they found that second-born siblings have significantly lower verbal and nonverbal intelligence scores than their older siblings. The results are not dependent on age or gender.

The findings show how examining birth-order effects might help explain differences in severity among children with autism, says Keely Cheslack-Postava, a postdoctoral researcher at Columbia University who was not involved in the study.

Second-born children are at least 2.5 times more likely than firstborns to be deemed untestable on the two intelligence tests used in the study, suggesting they are severely impaired. Because these children weren’t included in the intelligence analysis, the difference in severity may be even more pronounced than the current findings indicate.

However, it’s also possible that the difficulty in testing these siblings arises in part because of their younger age, says Catherine Lord, director of the Center for Autism and the Developing Brain at New York Presbyterian Hospital, who was not involved in the study.

Several studies published in the past two years have linked autism risk (but not severity) to birth order and the interval between pregnancies.

The first study, published in PLoS ONE in 2011, found that in families with a single affected child, autism risk increases with each birth. In families that have more than one child with autism, middle children have the highest risk, according to the study2.

The findings are somewhat at odds with previous research suggesting that firstborn children are at highest risk of autism.

In a second study, published in Pediatrics in 2011, a different group found that autism risk increases only when there is a short interval between pregnancies. The study found that children born within a year of an older sibling have a more than threefold higher risk of developing autism than those born at least three years apart3.

A third study, presented at the American Society of Human Genetics conference in San Francisco in November, also found higher risk for second-born children, especially those born less than a year after an older sibling.

“There is a lot more work that needs to be done in terms of getting into these associations and trying to figure out what really explains them and to test concrete hypotheses,” says Cheslack-Postava, who was part of the team that led the Pediatrics study.

The reasons that later-born children are at higher risk of autism or have more severe symptoms of the disorder are unclear. Autism is highly genetic, but the uneven risk among siblings suggests environmental or social factors are at play as well.

For example, it’s possible that parents who already have one child with autism won’t be able to dedicate the same amount of attention to helping the second child.

Martin favors two other possible explanations: a role for the maternal immune system, and alterations in epigenetic factors — chemical modifications to DNA that alter gene expression but not the DNA sequence itself.

There is growing evidence that the mother’s immune system can influence autism risk. Mothers of children with autism are five times more likely than controls to have anti-brain antibodies, which recognize proteins in the fetal brain.

It’s not clear why these antibodies arise, but the theory is that they enter the fetal brain and alter development. Mice and monkeys injected with these antibodies during pregnancy give birth to offspring with abnormal behavior.

Antibodies from the first child that persist in the mother’s bloodstream, along with antibodies generated during the second pregnancy, may contribute to higher risk or greater severity in second-born children.

It’s also possible that changes in methylation — chemical modifications to DNA that turn genes on and off — alter risk. Diet and other environmental factors can alter the methylation status of a gene.

“Birth order and birth interval speak to these complicating factors,” says Aravinda Chakravarti, professor of medicine at Johns Hopkins University in Baltimore, who was not involved in the study. Studying these families in more depth may help scientists better understand these nongenetic risk factors for autism, he says.