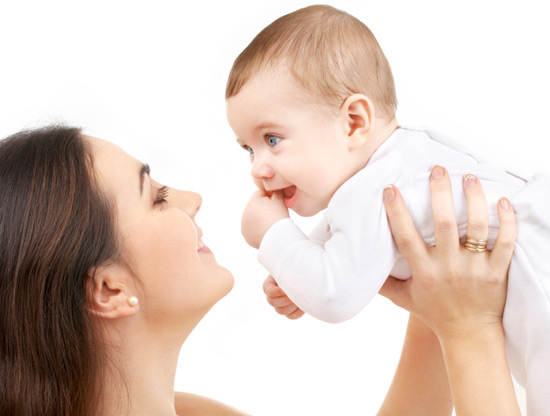 Warning signs: At 12 months of age, infants who are eventually diagnosed with autism look less often at faces than do typically developing controls.

At 6 months of age, babies who will later develop autism begin to lose some of their social skills and continue to regress until age 3, according to a study published in March in the Journal of the American Academy of Child & Adolescent Psychiatry1.

Unexpectedly, most parents do not notice this decline, suggesting that it happens gradually and without easily detectable dramatic changes.

The study highlights the need for better screening methods to identify children at risk for the disorder as early as possible, the researchers note.

“We don’t have any screeners right now that are useful for the 6-to-12 month period,” says Sally Rogers, professor of psychiatry at the University of California, Davis MIND Institute. Based on the findings of their study, the researchers are developing new screening tools.

The American Pediatric Association recommends that clinicians screen children for autism twice by age 2. Given the new findings, these guidelines may need to be revised, Rogers adds. “It may really be that we’re going to have to be recommending repeated screenings, maybe at every well-baby checkup, across the infant and pre-school period if we really want to identify everybody.”

Rogers’ team followed younger siblings of children with autism from 6 months to 3 years of age. Many studies in the past few years have focused on these so-called ‘baby sibs’, who are 10 to 20 times as likely to develop the disorder as are those without a family history, experts say.

None of these previous studies — which focused mostly on language, motor and sensory skills — found signs of autism in children younger than 6 months2,3.

The same trend holds in the new study, the first to delve more thoroughly into baby sibs’ social behaviors. Researchers compared 25 children who would later be diagnosed with autism with 25 healthy controls. Every three months, the scientists evaluated the children on a variety of measures, such as their ability to utter sounds, words or phrases, how often their gaze is directed either at faces or at objects, and how often they smile or laugh.

At 6 months, children who go on to develop autism score no differently than do controls. “This was the most important finding that we had, and the biggest surprise to us,” Rogers says. “We were sure that we would be able to detect decreased social interaction, decreased social interest and decreased eye contact in babies who were going to develop the behaviors of autism — and we could not find that.”

The researchers did not detect differences between the two groups until the babies reached 12 months. At that age, baby sibs who go on to develop autism begin to spend less time looking at faces or vocalizing while doing so than do healthy baby sibs.

By 18 months, baby sibs who develop autism show a similar decrease in the amount of time they spend smiling while looking at faces. As they get older, this group of children continues to lose skills and social behaviors.

This study is important because it is one of the first prospective studies to look for early onset of autism, notes Ami Klin, director of the Autism Program at Yale Child Study Center.

Until recently, researchers relied either on retrospective reports or indirect measures, such as movies made by parents, when looking for early signs of autism. “This is a great advancement, in that people are now observing children directly,” Klin says.

Still, he adds that the researchers’ conclusions are a bit premature. “This study utilized basically brief observational measures of children obtained in a very constrained environment,” he says. More sophisticated and quantifiable measures of behavior that appear early in development could help detect autism even earlier than 6 months, he says.

For example, even 2-day-old healthy infants show a preference for animated depictions of human motion compared with other animations. Klin’s studies have shown that 2-year old children with autism show no such preference4.

Other experts say they have qualms about the way the researchers measured and analyzed baby behaviors.

Researchers at two sites videotaped the infants while they interacted with adults. For the final analyses, the researchers pooled observational data from both sites. Because some families missed visits and some video clips were unusable, however, the two sites evaluated a different number of infants in each age group.

The lack of a tightly controlled observational setting and the particular statistical analyses used make the data difficult to interpret, notes Mayada Elsabbagh, coordinator of the British Autism Study of Infant Siblings.

“The findings may be robust as group data, but we need to be careful with how valid such measures are in individual children,” she says.

The findings about regression are somewhat more controversial. Researchers had previously hypothesized that there are two kinds of autism: one in which symptoms appear early and become more pronounced with age, and another in which children develop normally and then gradually lose skills5.

But not all reports agree with the idea of a regressive autism phenotype. For example, a study that analyzed the brain waves of children with autism during sleep found epilepsy-like readings in 14 percent of children who had undergone regression, as opposed to 6 percent of children with early-onset autism6. A subsequent study, however, found no difference in brain activity between the two groups7.

The new study found that 86.4 percent of the infants who later develop autism show a clear decline in social communication. This differs from previous reports, based on which the researchers expected to see regression in only a small proportion of the children.

“When the babies came in before 12 months, parents would say, ‘I’m so happy to be sharing my normal baby with you,'” Rogers says. “But then in the next year, that baby developed autism, which was just devastating.”

Parents noticed this regression in only 4 out of 19 cases, however. “It was very surprising. It’s one of the most interesting things we’ve learned in these seven years of study,” Rogers says.

Rogers previously reported that parents can detect early signs of autism by the time their children are 12 months old8. Taken with the new results, this suggests that children with autism lose social skills slowly over the first year. The decline is so subtle and gradual that parents don’t notice it, the researchers suggest.

Early-onset and regressive autism are probably part of the same continuum, says Rogers, adding that the timing of autism’s onset may be random, with no bearing on the disorder’s severity. She compares it to an infant catching a cold for the first time: “You’re going to get a cold, and it probably doesn’t mean anything whether it’s at 6 months or at 15 months.”

Researchers will need more intensive follow-up studies using better measures of social development before drawing such strong conclusions about whether autism is regressive, Klin cautions. That’s because social behaviors may serve different purposes at different times of development. For example, at 6 months, a smile could be an instinctive reaction to seeing other people, but at 12 or 18 months, it could indicate that the child is engaging socially with others.

Without understanding the purpose of a specific behavior at a particular age, it’s difficult to know whether a child loses social skills, or simply fails to develop them in the first place, Klin says.

To confirm the findings and address some of these limitations, the researchers plan to expand the study to include more children and evaluate them more frequently. They also plan to use different measures of early development, such as eye-tracking.