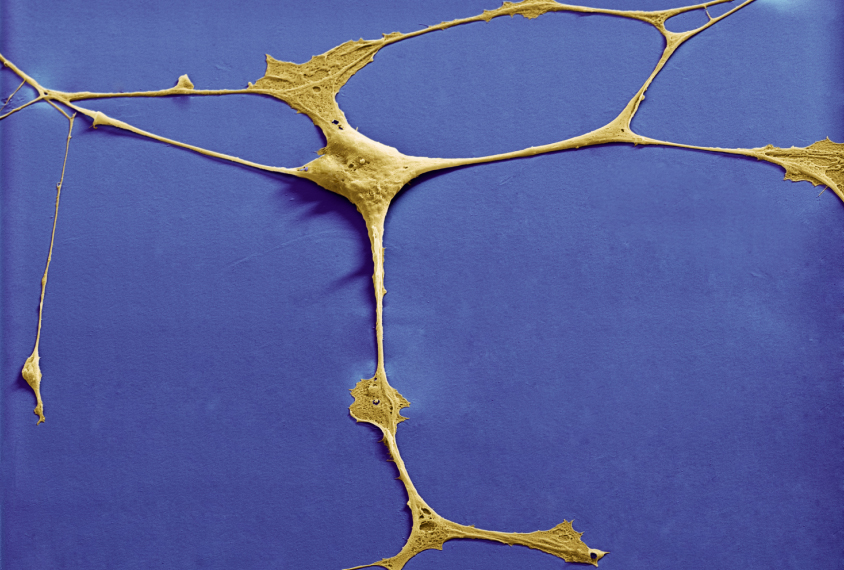 Growing pains: Problems with signaling in the mTOR pathway interfere with the growth and development of neural precursor cells from people with autism and related syndromes.

Neural precursor cells from people with diverse forms of autism have similarly atypical patterns of development, according to an unpublished study. Those patterns stem from problems in a signaling pathway called mTOR, the results suggest.

It “adds on to a great deal of previous studies that say that there’s likely convergence of mTOR signaling causing many forms of autism,” says David Sulzer, professor of psychiatry, neurology and pharmacology at Columbia University, who was not involved in the work.

The mTOR pathway involves a cascade of cell signals that shape the growth of a neuron and its synapses. Previous studies have tied overactivity of this pathway to several autism-linked genetic conditions, including tuberous sclerosis, PTEN hamartoma tumor syndrome and fragile X syndrome.

The new work hints that not only overactivity, but also underactivity in the mTOR pathway can contribute to autism, including idiopathic forms and those related to deletions of the chromosomal region 16p11.2. Those opposite mTOR problems could account for some of the subtype-specific differences seen within the condition, says lead researcher Emanuel DiCicco-Bloom, professor of neuroscience and cell biology at Rutgers Robert Wood Johnson Medical School in Piscataway, New Jersey.

Because the study has not yet gone through peer review and uses a relatively small sample of cells from six autistic children — only half of them with idiopathic autism — it’s important to not overinterpret the results, says Peter Crino, professor and chair of neurology at the University of Maryland School of Medicine in Baltimore, who was not involved in the study. “The idiopathic autism group is difficult to represent with only three individuals,” he says.

The cells also migrate less and grow fewer neurites, or neuronal projections, than do cells from the idiopathic participants’ non-autistic siblings or non-autistic controls, the team’s new work shows.

“Whatever the cell’s trying to do, there seems to be limitation of the developmental processes. It’s not missing, but it’s diminished,” DiCicco-Bloom says.

The children with idiopathic autism had no genetic mutations in the 16p region that could explain the commonalities among cells from the autistic participants, whole-genome sequencing confirmed. And adding growth factors to the cultures stimulated migration and neurite formation for the sibling cells and for 16p11.2 cells, but not for cells from children with idiopathic autism, suggesting that the shared traits arise from different mechanisms.

Of the six autistic children whose cells had problems with migration and neurite growth, four had elevated signaling within the mTOR pathway. Two — both with idiopathic autism — had reductions within that pathway.

“Amongst all this heterogeneity and all these differences in autism, there might be some common driver,” says study investigator Smrithi Prem, a resident physician in psychiatry at the University of Pennsylvania in Philadelphia. “And perhaps it’s mTOR — at least in a decent chunk of people.”

Treating the autism cells with drugs that either boost or tamp down mTOR signaling to the levels seen in sibling cells reversed the atypical neurite growth and migration, the team found. They posted the work on bioRxiv in September and it is currently under review at eLife.

It’s not yet clear how to reconcile the findings that an underactive and overactive mTOR pathway produce a similar phenotype, Crino says.

But if the findings hold, they may help explain why inhibiting the mTOR pathway has not proved to be an effective treatment approach for the heterogeneous autistic population, Prem says. “Someone with low mTOR and [someone with] high mTOR would get totally different treatments.”

And because the work identifies autism-linked phenotypes in cells as early as neural precursor cells, it may be unveiling some of the condition’s earliest effects, Sulzer says. “There’s no doubt that some of the many disorders that we lump together and call autism already have major effects long before the age of 2.”

DiCicco-Bloom and his colleagues plan to study whether their results hold in cells from other people with idiopathic autism and other genetic forms of the condition.

For now, Prem says, it seems that dysregulated mTOR might be a biomarker for some forms of autism. “The question becomes: Which forms?”