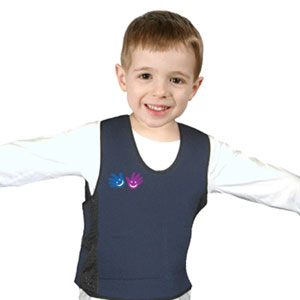 Wayfair.com Clear path: Investing in therapeutic devices for autism, such as pressure vests, may help outline the regulatory pathway for drugs.

The research and advocacy organization Autism Speaks plans to launch a nonprofit arm that will fund companies to develop treatments for the disorder, Robert Ring, head of translational research for the organization, announced yesterday at the Autism Consortium Research Symposium in Boston.

The venture’s goal is to help close a well-known funding gap in medical research, moving basic research findings towards clinical use.

“This is a new vehicle for funding companies working closer to the market,” Ring, who will serve as president, told SFARI.org. “It will focus on projects that have the ability to deliver medicines, devices and assistive technologies — anything that can improve health and quality of life [for people with autism].”

CalledDelivering Scientific Innovation for Autism, or DELSIA, the venture will be funded entirely by Autism Speaks, though Ring declined to reveal the amount of funding committed to the project.

DELSIA will operate independently from Autism Speaks, with its own governance and accounting systems, but overlap in the advisory boards.

Ring says the organization modeled the venture on similar efforts at other nonprofits, such as the Cystic Fibrosis Foundation and the National Multiple Sclerosis Society.

DELSIA has a broad focus on drugs, diagnostics and therapeutic and assistive devices such as iPad applications. But in the near-term, the venture is most likely to focus on devices, such as pressure vests, which are quicker to bring to market.

Ring says focusing on devices will help streamline the regulatory process. Because no drugs or devices are approved to treat the core symptoms of autism, the regulatory path is murky. For example, it’s not yet clear what the U.S. Food and Drug Administration will accept as a measure of improvement, making pharmaceutical companies reluctant to participate in expensive trials.

In contrast to traditional investigator-driven grants, Ring says DELSIA aims to approach its investments much like a venture capital firm would, evaluating proposals on both the promise of the science and the potential for a return on the investment.

Unlike traditional investment firms, however, it will measure success based not on income but on progress and benefit to the community. Any profits will be reinvested into the scheme, Ring says.

Ring declined to name companies or technologies that DELSIA might invest in. But he says iPad applications are an area of interest.

“The iPad platform has inspired more development in the community than I’ve ever seen, which is both exciting and concerning,” he says. “Families are allowing their children to invest their most valuable resource — developmental time.”

Most iPad applications for autism haven’t been subject to rigorous testing for effectiveness, Ring notes. “We need to bring an evidence-based environment to this rapidly exploding area.”