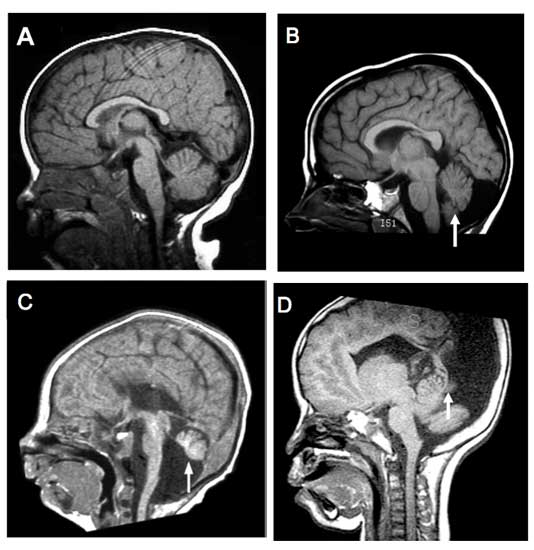 Misshapen structures: MRI scans show that, compared with controls (A), the cerebellum of a child with autism (B) shares some features with those of children with Dandy-Walker malformation caused by deletion of chromosome 3q24 (C) or chromosome 6p25 (D).

There are clinical, anatomical and genetic overlaps between autism and certain rare developmental disorders of the cerebellum, and these disorders may help scientists understand autism, according to several studies published in the past year.

The cerebellum integrates sensory information and plays a role in coordination and motor control. Brain scans and autopsy studies published since the late 1980s have implicated the brain region in autism, though its exact involvement in the disorder is still unknown.

Although some evidence is anecdotal, people with severely misshapen cerebellums are often diagnosed with autism or autism-like features, notes Kathleen Millen, associate professor of human genetics at the University of Chicago. Conversely, she says, a subset of children diagnosed with autism are later found to have “cerebellar abnormalities — some subtle, some not so subtle.”

For a study published in the September issue of Nature Genetics1, Millen and her colleagues examined brain images of 12 people with deletions and 6 with duplications in the 6p25.3 chromosomal region, many of whom also have autism or symptoms of the disorder. The area includes the FOXC1gene, which is thought to be involved in cerebellar development.

People with mutations involving FOXC1 show a variety of malformations including cerebellums that are smaller or larger than usual, the scientists found. Those features are characteristic of three related birth defects: Dandy-Walker malformation, cerebellar vermis hypoplasia and mega-cisterna magna.

The researchers also found that mice that have lower-than-normal levels of FOXC1 have an uncoordinated gait. They also have malformed cerebellums — including smaller cerebellar vermes, worm-shaped segments that divide the hemispheres of the cerebellum — similar to those seen in people with FOXC1 mutations.

Surprisingly, FOXC1 is not expressed in neurons; the group’s study of mouse embryos shows that it is instead expressed in the skull and in the tissue layers that encase the cerebellum during early development. That suggests that the protein instructs from a distance the expression of other genes involved in brain development, researchers say.

“It’s a paradigm shift for how we think of brain development,” says Joseph Gleeson, professor of neurosciences at the University of California, San Diego, who was not involved with the work. “We shouldn’t always immediately focus on the neurons. We have to look at the whole picture.”

Although disorders of the cerebellum could provide a means to study autism, it has proven challenging to pinpoint the disorders’ overlap because of the bias in diagnosing more than one disorder. For example, some children diagnosed with autism are never given the brain scans necessary to identify Dandy-Walker malformation. And some of those with the syndrome are never established as having autism through a formal assessment.

“Many of our kids with autism were first identified with Dandy-Walker, but when old enough later, were also diagnosed with autism spectrum disorders,” Millen says. “We think that the FOXC1 gene contributes to this.”

The co-occurrence of autism and Joubert syndrome, a rare neurodevelopmental disorder that results in misshapen cerebellums, is also difficult to estimate. One study found that about 30 percent of people with Joubert syndrome have autism2. Another study of 31 families with Joubert syndrome reported that none of the affected children meets the clinical cut-off for autism3.

Gleeson says that although Joubert syndrome is rare, it does co-occur with autism in the same family and could point to gene candidates for both disorders. He and Daniel Geschwind showed in December 2008 that a variant in the AHI1 gene, which is linked to Joubert syndrome, is also associated with autism4.

“That suggests that autism is a vast collection of rare genetic causes,” Gleeson says. “You would find similar examples in Rett syndrome.”

In a separate study published in the September issue of Nature Genetics, Gleeson’s group describes another set of genes linked to Joubert and involved in cerebellar development5.

“We would suspect that, if one tested directly, most or all of these genes will play some role in autism susceptibility,” he says.

A smaller vermis is not specific for autism, because it is also seen in people with Rett syndrome and mental retardation. That means that differences between the disorders are likely to be found at the cellular and molecular levels, says Eric Courchesne, professor of neurosciences at the University of California, San Diego.

Differences in the size and structure of the cerebellum have themselves been a subject of controversy over the years. Courchesne and his colleagues discovered in 1988 that parts of the vermis are significantly smaller in people with autism compared with typically developing controls6.

Several studies failed to replicate the finding, or found other regions that are either larger or smaller than those of healthy people. But those studies were small, according to a meta-analysis of 46 brain imaging studies, which together studied more than 800 people with autism7. The studies also used heterogeneous groups of children with, for example, different ages and intelligence quotients.

The analysis also found that children with autism have a smaller brain volume in the same region of the vermis seen in Courchesne’s original study. The effects are more pronounced in younger children.

More recently, David Amaral and his colleagues at the University of California, Davis, used magnetic resonance imaging (MRI) to document cerebellum size in children with autism, ranging in age from 7 to 18 years old.

In the October issue of Autism Research, the researchers reported that they found no differences in overall cerebellum size, but that children with high-functioning autism have slightly smaller vermes than do healthy controls8. Another MRI study published this year, in children aged 3 to 4 years, also found that the vermes in those with autism are smaller than those of healthy controls9.

Along with its role in autism, the view of the cerebellum itself has been changing over the years.

“We always thought of the cerebellum as sequencing motor movements,” says Emmanuel DiCicco-Bloom, professor of neuroscience and cell biology at Rutgers University in New Jersey. But researchers now know that the cerebellum can regulate more complex tasks, such as quick shifts in attention.

Through its connections to the higher functioning centers of the brain, the cerebellum is also emerging as an important region for regulating emotion and sensory reactivity, Courchesne notes. Children with autism sometimes have trouble processing sensory information and emotions.

“Its role in autism is very interesting because it may be that [in the disorder], it insufficiently regulates responses to how a child responds to the emotional and sensory world,” Courchesne says.