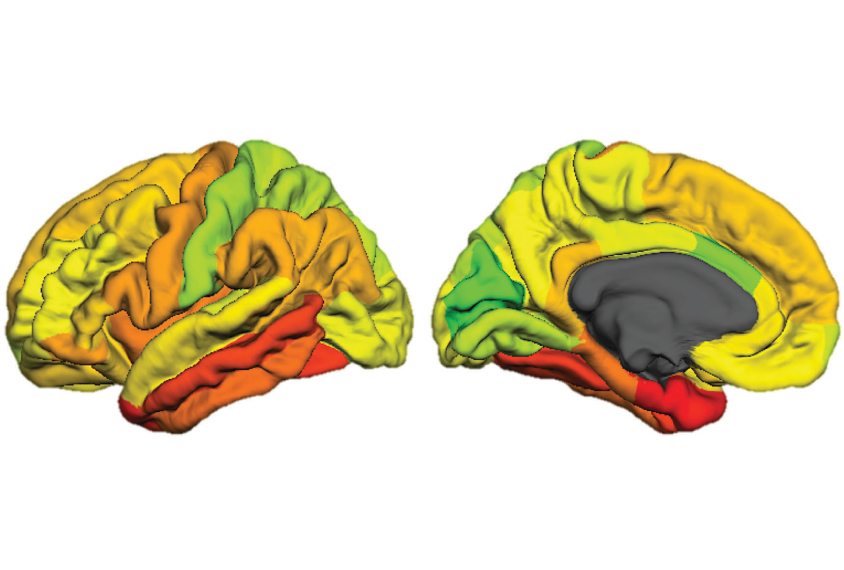 Autistic people share some brain structure differences with people who have other neuropsychiatric conditions, including schizophrenia and attention deficit hyperactivity disorder (ADHD), according to a massive new brain-imaging study1. These shared differences stem from the atypical development of one particular type of neuron, the findings suggest.

The results provide “further evidence that our understanding of autism can really be advanced by explicitly studying autism in the context of other disorders,” says Armin Raznahan, chief of the Section on Developmental Neurogenomics at the U.S. National Institute of Mental Health in Bethesda, Maryland, who was not involved in the study.

The team found that the brains of people with these conditions differ from controls in a specific way: They have similar patterns of thickness across the cortex, the brain’s outer layer. The cortical regions with the biggest differences in thickness are typically rich in a particular type of excitatory neuron.

“We were able to put our fingers on what might be behind that commonality,” says lead researcher Tomas Paus, professor of psychology and psychiatry at the University of Toronto in Canada. “That was very exciting.”

The work combined data from 145 cohorts within the Enhancing Neuroimaging Genetics through Meta-Analysis (ENIGMA) consortium, an international group of researchers who collect and analyze brain-scan data in a standardized way so that they can pool their results.

Paus, Patel and their colleagues used magnetic resonance imaging (MRI) to scan the brains of 12,721 people with any of the six conditions and 15,600 controls, all aged 2 to 89 years. For each scan, they divided the cortex in the left hemisphere into 34 different regions and assessed the thickness of each. They then looked at how much the thickness in people with any of the six conditions deviated from that of controls.

The conditions that were more similar in their patterns of cortical thickness were also more likely to be genetically similar (a measure assessed in a previous study2). For example, autism and schizophrenia, conditions that share genetics and traits, showed the strongest correlation. The new work was published in JAMA Psychiatry in August.

Looking at the same 34 brain regions in the Allen Human Brain Atlas, a repository of gene-expression data, the researchers examined how 2,511 genes are usually expressed in typical brains. To guess at the cell types present in each region, they searched for these genes in expression data of nine different types of cells previously identified in mouse brains3. (Most human datasets that could be used for this purpose do not capture genetic information about a cell’s dendrites, the branches that receive input from other neurons, which are of particular interest for studying development4.)

Regions with the most atypical thickness, they found, show high expression of genes associated with a type of pyramidal cell — an excitatory neuron with bushy dendrites.

Using the BrainSpan atlas, which includes gene-expression data from human brain tissue at 8 weeks postconception to 40 years of age, the team examined how the expression of genes important for pyramidal neurons changes throughout development. They found that the genes in question fall into two groups: those expressed prenatally and those expressed postnatally.

The set of prenatal genes is associated with neurodevelopmental processes, such as the formation of dendrites and the growth of axons, neuronal branches that send signals to other cells in the brain. The other set, expressed after birth, is linked to brain plasticity and synaptic signaling.

Together, the findings hint that the thickness changes seen in the six conditions relate to something atypical happening with pyramidal neurons during two periods of development — first in the womb and then again during a person’s life, Paus says.

Probing these genetic associations in more detail may reveal “specific developmental windows that would be optimal for intervention,” says Carrie Bearden, professor of psychiatry and biobehavioral sciences at the University of California, Los Angeles, who was not involved in the study.

Moving forward, Paus and his colleagues will continue working with the same ENIGMA cohorts, and possibly a few more. They plan to run a similar study to see how cortical surface area, rather than thickness, compares across the conditions. Whereas the thickness of the cortex changes with age, surface area is relatively stable by about 2 years of age, Paus says. For that reason, looking at surface area could provide a glimpse at biological changes that unfold during the earliest years of development.