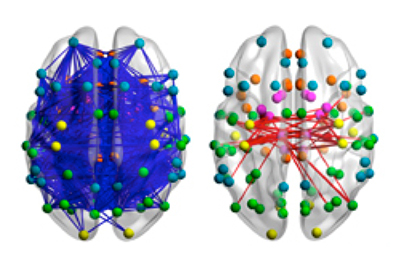 Keeping connected: Comparing hundreds of scans from different labs reveals neural connections that are weaker (left) and stronger (right) in people with autism than in controls.

The database, called the Autism Brain Imaging Data Exchange (ABIDE), gives scientists access to more than 1,000 brain scans of people with autism and controls. The researchers have already shown its potential by resolving inconsistent results on the strength of connectivity in autism brains.

Most large databases in autism research aggregate primarily genetic and clinical information from people with autism and their families. The new resource is the first to focus on storing and sharing brain imaging data.

“Despite the fact that there are a lot of challenges in sharing data, many labs were eager to do this,” says Adriana Di Martino, assistant professor of child and adolescent psychiatry at New York University’s Langone Medical Center.  Di Martino co-founded the database and now oversees it.

So far, the labs have submitted 1,112 images: 539 from individuals with autism and 573 from controls, all ranging in age from 7 to 64 years. Along with the scans, the researchers enter clinical information about each individual, including sex, age, intelligence quotient and autism diagnoses.

The scans are all from resting-state functional magnetic resonance imaging (R-fMRI), meaning that they capture brain activity when a person’s brain is not actively engaged in a task.

Because all research groups collect R-fMRI data in a similar way regardless of the specifics of their studies, they can contribute their scans without having to tailor them to fit the project.

R-fMRI also serves as a good tool for investigating the connectivity theory of autism, which suggests that connections in the brains of people with autism differ from those of controls.

This sort of large repository of neuroimaging data will allow research groups to get reliable answers about the nature of the autism brain, says Randy Buckner, professor of psychology at Harvard University, who is not involved in the project.

“Individual laboratories rarely are able to image a large enough group of individuals to see consistent patterns in the brain,” Buckner says. “Why didn’t we as a field do this sooner?”

Buckner is spearheading a program called the Brain Genomics Superstruct Project, which collects genetic information and brain scans from labs in the Boston area. The researchers are collecting samples from controls, but plan to expand it to include people with autism.

The proof of ABIDE’s value, he adds, will be in what scientists can discover about autism or its causes using the data.

For their study, the researchers used brain scans from 360 people with autism and 403 age-matched controls. They only included males in the study (90 percent of the individuals whose scans are in the database are male). The researchers searched for abnormalities in brain function by evaluating functional connections throughout the brain, as well as in particular regions.

“What was before thought to be a controversy in the literature of what characterized autism — hyperconnectivity or hypoconnectivity — actually shouldn’t be a dichotomy,” Di Martino says. Both are present, just in different parts of the brain.

Research has also suggested that small head movements people make as they lie in an MRI scanner can alter the results of connectivity studies. With this large dataset, the researchers were able to control for movement. When they ‘scrubbed’ their data, mathematically clearing up any trace of movement, their results were the same, suggesting that the movements did not skew their results.

“I think the study makes a definitive statement on the issue of connectivity, that it’s both over- and underconnectivity,” says Kevin Pelphrey, associate professor of psychology at Yale University, whose laboratory contributes to ABIDE. “It helped to clarify the mixed findings.”

In their regional analysis, the researchers used four different measures to examine the brain bit by bit. They flagged any point that differed between people with autism and controls on two or more of those four measures. They found that those points cluster in two regions of the brain: One, a part of the insula, which is frequently implicated as being disrupted in autism, and another, the thalamus, which is rarely examined in relation to the disorder.

Although these are the first results published from the exchange, many others are forthcoming. Di Martino says she knows of five papers under review at peer-reviewed journals. Pelphrey’s team is working on three studies using the data, including one looking at how sex differences manifest in the brain.