Autism not a fundamental problem of attention, study says 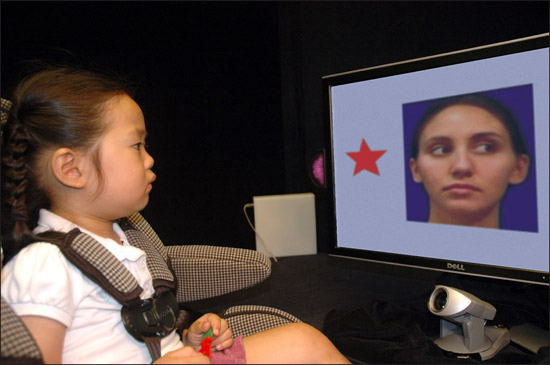 Driven to distraction: When looking straight at a face, children with autism switch their gaze to other objects, such as a star, more quickly than healthy children do.

Toddlers with autism pay less attention to faces than do healthy controls, but both groups give equal attention to objects, according to a study published in February in the Archives of General Psychiatry1.

Individuals with autism have impaired social interactions and tend to avoid eye contact. These symptoms led to the controversial ‘sticky attention’ hypothesis, which says that people with autism get their attention ‘stuck’ on objects, and that the disorder is associated with a fundamental impairment in the brain systems responsible for attention2.

The new findings challenge this idea, suggesting instead that individuals with autism struggle with how to attend to social stimuli, such as information from faces, researchers say.

“[The study] suggests that there’s something about social information, per se, that’s not capturing the children’s attention,” says Geraldine Dawson, research professor of psychiatry at the University of North Carolina, Chapel Hill, and chief science officer at Autism Speaks, an advocacy organization that funds autism research. Dawson was not involved with the study.

The participants in the study ranged from 15 months to nearly 5 years old, a broad range intended to control for the effect of age.

“It is quite likely that the phenomenon that we are tapping into is very basic and well preserved in development, and likely it is present already in the first year of life,” says lead investigator Katarzyna Chawarska, assistant professor of psychology at the Yale Child Study Center.

Identifying the earliest point in development at which this abnormality occurs could help children at risk receive behavioral interventions before they develop more overt symptoms, she says.

Researchers have suspected for several decades that individuals with autism have difficulties processing social information from faces. In 2003, Chawarska’s team suggested that this abnormality is connected to impaired attention3.

In that study, researchers placed 2-year-old children in car seats in front of computer monitors displaying either a face or an object. After about 1.5 seconds, the face or object disappears, and an image of a toy appears on one side of the screen. The researchers measured how long it takes for a child to look at the toy.

When children with autism look at faces, they divert their attention to the toy in the periphery faster than their healthy peers do, the researchers found.

But the study did not address whether this abnormality is specific to autism, or is shared by children with other developmental disorders. Because the faces vanished from the screen just before the non-social stimulus appeared, the study also didn’t adequately simulate real life.

In the new work, Chawarska’s team studied 42 toddlers with autism spectrum disorder, 31 with other development or language delays and 46 healthy controls. This time, the faces remained on the screen throughout the trial, better simulating actual social interactions.

Once again, researchers found that toddlers with autism shift their eyes away from faces to peripheral objects more quickly than do either the typically developing toddlers or those with an array of developmental disorders. And again, there was no measurable difference in the time it takes each group to divert attention from non-social stimuli to a peripheral object.

Based on these findings, the researchers speculate that when healthy or developmentally delayed children see a face, they begin making complex brain computations such as: ‘Is this face new or familiar? Is this person nice or mean? Is he or she happy or sad?’

“These children are trying to extract as much information about this face as possible, thereby creating a more elaborate representation of the face in their memory,” Chawarska says. “Next time the child sees this face, it’s easier for the child to recognize it.”

In contrast, children with autism might focus on physical aspects of a face, such as: ‘Is this a man or a woman?’ or ‘Does this person have red hair or gray hair?’, rather than processing facial gestures and expressions. Because children with the disorder encode fewer facial features, they might process information more superficially and spend less time looking at faces than do control groups.

Children with autism may also have trouble remembering faces, which could result from less attention and more superficial processing of social information.

Last year, Chawarska and her colleague Frederick Shic found that toddlers with autism have difficulty recognizing faces, and that these deficits in recognition are associated with a tendency to look more at external facial features — such as cheeks and forehead — than at the eyes, nose or mouth4. In 2008, co-investigator Ami Klin and his group also reported that when looking at a face, toddlers with autism prefer to look at the mouth than the eyes5.

Children with autism might be able to shift their attention away from faces more quickly because they engage less with eyes, says Klin, head of autism research at the center.

The new study suggests that children with autism don’t reap the same social rewards from looking at faces as healthy children do, notes Dawson. Her research has found that behavioral interventions can teach very young children with autism to find social interactions more rewarding and engaging6.

Learning more about these differences could also help address the problem much earlier in infancy, notes John Constantino, professor of psychiatry and pediatrics at Washington University in St. Louis.

“What these researchers are after is finding the earliest fundamental thing that distinguishes these children, with the hope that someday we could actually target that and reverse it, so that it doesn’t result in this cascade of deteriorated social function,” Constantino says.

Chawarska says that it is still too early to predict how her findings will influence therapeutic approaches to autism.

She is studying siblings of children with autism with the hope of identifying face-processing skills that are either preserved or impaired in babies who later develop autism. “Once we understand the mechanisms, then we hope to intervene and not only diminish the symptoms, but also hopefully prevent new symptoms or secondary symptoms from developing,” Chawarska says.