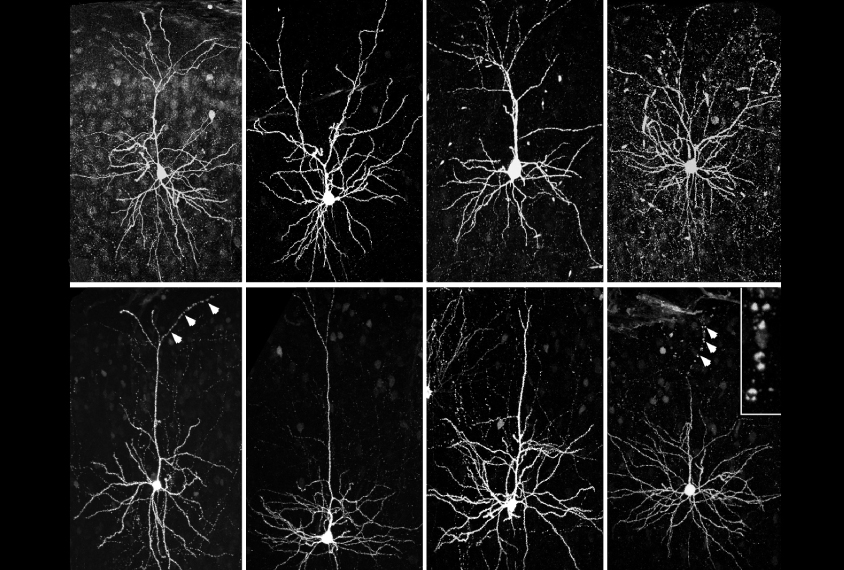 Branching out: Neurons from mice missing a segment of chromosome 22 (bottom) have fewer branches than those from controls (top).

Mice that lack a segment of chromosome 22 — a mutation associated with autism — have unusually sparse connections between brain regions, according to a new study1. The missing links result from problems with mitochondria, the minute ‘energy factories’ within cells.

The mitochondria in the mutant mice don’t neutralize certain chemicals that can damage cells. Treating the mice with a compound that mops up these chemicals restores their brain connections, the study shows. It also improves the performance of the mice on cognitive tests.

“It not only fixes the number of connections, but it also fixes the behavior,” says lead researcher Anthony-Samuel LaMantia, professor of neurosciences, anatomy and cell biology at George Washington University in Washington, D.C.

The findings fit with a growing body of evidence that links autism to mitochondria. Researchers have found problems with mitochondria in the brain tissue, muscle tissue and white blood cells of autistic children, as well as in the brains of mice with a different mutation linked to autism2,3.

“We’ve had this global sense that mitochondrial dysfunction may be particularly relevant to synaptic defects, but I think this [study] really provides more specificity to that story,” says Carrie Bearden, professor of psychiatry, biobehavioral sciences and psychology at the University of California, Los Angeles, who was not involved in the research. “And it does provide some evidence for a potential mechanism of treatment.”

Some researchers caution, however, that the findings may only apply to the chromosome 22 mutation.

“The authors should test the same hypothesis in other animal models of autism,” says Agustin Legido, professor of pediatrics and neurology at Drexel University in Philadelphia, who was not involved in the research.

People with so-called 22q11.2 deletion syndrome lack one copy of the segment, a span of 30 to 40 genes. Up to half of these people have autism.

LaMantia and his colleagues looked at brain tissue from mice missing the same region. They found that the mice have unusually few neurons in two of the six layers of the cerebral cortex — the outer portion of the brain. These neurons, in layers 2 and 3, make long-range connections across the cortex.

The layer 2 and 3 neurons also have an odd shape in the mutant mice: Their axons and dendrites are shorter and have fewer branches than those of controls. The shortage of branches may translate to fewer synapses, or neuronal junctions, LaMantia says.

The mitochondria in the mutant mice’s neurons are also misshapen. They are round and swollen rather than long and narrow. Round mitochondria are a sign of a surplus of chemicals called reactive oxygen species (ROS), which can harm cells; the researchers confirmed this surplus in the neurons.

One of the genes within 22q11.2 — TXNRD2 — codes for an enzyme that helps neutralize ROS. When the researchers silenced this gene in typical neurons, ROS in the cells increased, and axons and dendrites shrank. (Silencing other genes in the region did not recapitulate these neuronal abnormalities.)

The findings highlight the importance of the gene to both mitochondria health and brain connections.

“This TXNRD2 gene was not one we previously had a lot of information about,” Bearden says. “They find that it’s essential for [the degradation of] reactive oxygen species, and so it may be particularly relevant to these synaptic defects.”

An antioxidant that neutralizes ROS improved the mice’s performance on a test of executive function, a set of core thinking skills. It also decreased the amount of ROS and extended the length of axons and dendrites in the animals’ brain tissue.

“The evidence that we present indicates strongly that the reactive oxygen compounds are a causal player,” La Mantia says. The results appeared 9 May in Neuron.

The next step, he says, is to determine whether the antioxidant permanently fixes the abnormalities in young mice or whether the animals would need to be continuously treated.