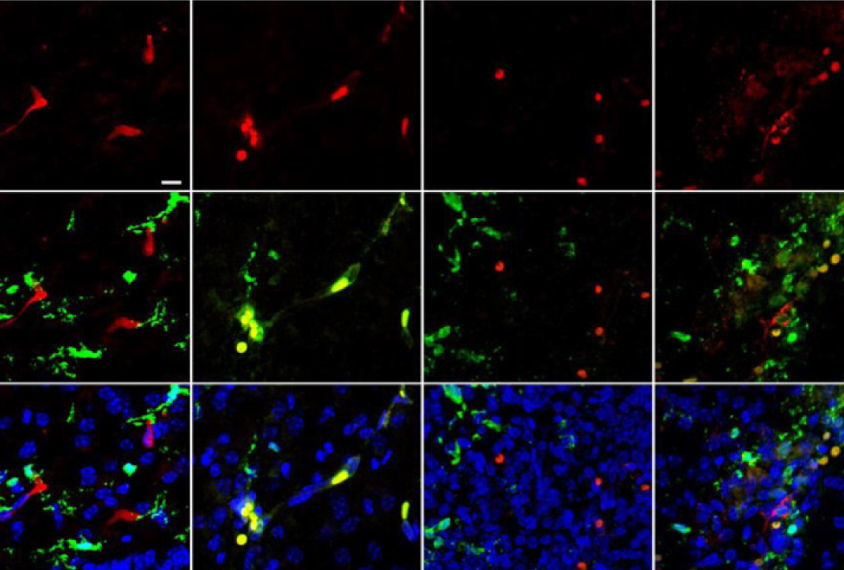 An autism-linked mutation could make the brain grow unusually big by prompting cells to express a “don’t eat me” signal, according to a new study.

The result — a surplus of cells — could help explain why people with the mutation tend to have an enlarged head, or macrocephaly.

“Looking at the big picture, it made sense that with these large brains, you’d have [more] cells,” says study investigator Thomas Brickler, a scientist at Sana Biotechnology in Seattle, Washington.

CD47 was already known to be an anti-phagocytosis signal: Some cancer cells express high levels of it on their surfaces and thereby escape destruction by the immune system.

“So we thought maybe the brain enlargement is due to these types of cancer pathways going awry,” says lead investigator Sundari Chetty, assistant professor of psychiatry and behavioral sciences at Stanford University in California.

Previous work in zebrafish attributed macrocephaly to the loss of KCTD13, one of the genes in the 16p11.2 region, but more recent research in mice challenged that connection. And because there are about 29 genes in the 16p11.2 deletion region — any one of which might play a role — figuring out how the deletion leads to macrocephaly is a major challenge, says John Constantino, professor of psychiatry at Washington University in St. Louis, Missouri, who was not involved in this research.

“This [study] was a gamble,” he says. “The discovery that this is the pathway, or at least a candidate pathway, by which the 16p11.2 deletion affects brain development in [autism] — I just thought that was magnificent.”

Previous studies in mice that lack one copy of the 16p11.2 region have helped to reveal some of the mutation’s effects on brain activity. But these mice have unusually small brains, making them ill suited for modeling macrocephaly.

So Chetty and her team turned to human induced pluripotent stem cells, which are capable of maturing into virtually any cell type. They obtained four cell lines derived from people with a 16p11.2 deletion and a large brain, from Simons Searchlight. (The project is funded by the Simons Foundation, Spectrum’s parent organization.)

To test whether these higher CD47 levels dampened phagocytosis, the researchers added immune cells called macrophages, derived from blood, to the culture dishes. Although these blood-derived cells don’t normally exist in the brain, they do the same job as microglia.

The macrophages ate fewer of the 16p11.2 deletion cells than control cells, the researchers found, despite the high levels of calreticulin. Blocking CD47 with an antibody restored levels of phagocytosis to normal.

The team used blood-derived macrophages in the dish because procedures for doing so are more established than those for adding microglia, Brickler says. To test whether CD47 would have the same effect on microglia, they injected either control cells or 16p11.2 deletion cells into the brains of mice and observed the same result.

The results appeared in April in Proceedings of the National Academy of Sciences.

Although the experiments in mice and cultured cells support the idea that high levels of CD47 in people with 16p11.2 deletions are related to their macrocephaly, it’s impossible to confirm that hypothesis without looking at human brains, Chetty says.

As a first step toward that goal, Chetty says she hopes to examine samples of brain tissue from people with 16p11.2 deletions and macrocephaly to see if their cells show high levels of CD47.

“The one issue that we’ve run into is that many of the brain banks don’t have the information on brain volume or head circumference tagged with the postmortem brains,” she says.

And it’s still unclear how the 16p11.2 deletion causes increased CD47 levels. Chetty and her team are working to clarify that link. Here, mouse models may prove helpful, Brickler says. Because the mice don’t show macrocephaly, their deletion presumably doesn’t include the gene whose loss is responsible for macrocephaly in people. That same gene, Brickler says, may lead to greater CD47 expression.

Similarly, reduced phagocytosis might not necessarily lead to macrocephaly, Brickler says, noting that fewer neurons getting consumed in a dish doesn’t automatically imply bigger brains. But the researchers have some evidence of a direct link: They also created progenitor cells from people with a 16p11.2 deletion but without macrocephaly. These cells showed typical levels of CD47 and phagocytosis.

The link between CD47 and macrocephaly could have implications beyond 16p11.2 deletion syndrome, Constantino says. Other autism-linked genes, such as PTEN and CSDE1, are also associated with macrocephaly — and it’s conceivable, he says, that CD47 could play a role there as well.