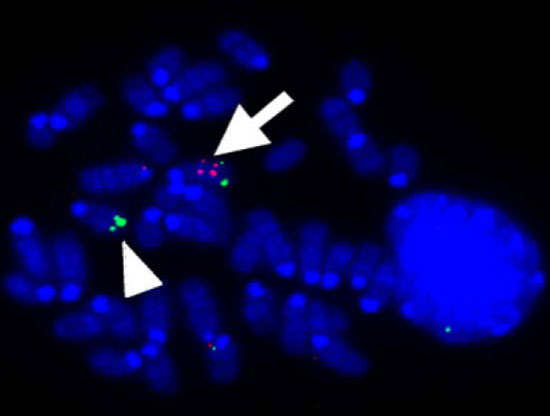 Double take: The mutant mice have a normal set of chromosomes (blue), with one exception: an extra copy of a 6-million-nucleotide region on chromosome 15 (pink and green spots).

Scientists have genetically engineered a new mutant mouse that shows social abnormalities and learning and memory problems reminiscent of autism, according to a study published 26 June in Cell1.

The mouse carries a duplication of 15q11-13, a region of chromosome 15 that stretches more than 6 million nucleotides. Studies estimate that one to three percent of people with autism carry genetic variations in 15q11-132, making it the region most commonly associated with the disorder.

Modeling such large chromosomal abnormalities in mice has proven challenging, researchers say. “We have wanted [this mouse] in the research realm for probably 15 years, since we discovered the duplications were associated with autism,” notes Susan Christian, associate professor of human genetics at the University of Chicago, who was not involved in the study.

Since 15q11-13 was first linked to autism in 19913, researchers have created several mouse models lacking full doses of specific genes within the region. These include the UBE3A gene, which is thought to help maintain connections between neurons, and the GABA receptor gene, which codes for a chemical needed for neuronal signaling.

Both of these mouse models harbor relatively small deletions. In contrast, engineering a duplication of 15q11-13 is much more complicated because the region must stay intact after genetic recombination, a stage in normal cell division.

“Because this target region of 15q is more than 6 megabases — it’s extremely long — it was technically very difficult,” says lead investigator Toru Takumi, professor of integrative bioscience at Hiroshima University in Japan.

Takumi’s team, collaborating with several other research groups in Japan and the UK, began the project in 2001. First, they inserted the duplication into embryonic stem cells in culture. The cells, provided by UK collaborator Allan Bradley, were a key aspect of the experiment, Takumi says, because they grow and recombine more efficiently than do other lineages. The researchers then inserted the altered stem cells into early-stage embryos of normal mice, whose offspring inherit the duplication.

Compared with healthy controls, mice that inherit an extra copy of 15q11-13 from their fathers are less likely to adapt to sudden changes introduced in learning and memory tasks, the scientists found.

In one test of spatial memory, for example, researchers track the movement of mice as they swim in vats of water in search of a raised platform. When researchers suddenly change the location of the platform, mutant mice are slower to find it than controls, suggesting that the mutants are “behaviorally inflexible,” Takumi says.

The mutant mice are also less sociable: when placed near a mouse they have not met before, they spend less time with the stranger than do control mice.

“[The study is] a major step forward,” Christian says. She explained the findings to some parents of children with chromosome 15 duplications at a scientific meeting in late June. “The families are excited that we found another tool that we haven’t found before.”

Excitement about the findings is tempered, however, by critical differences in how the duplication affects the behaviors of humans and mice.

People and mice normally have two copies of chromosome 15, one from each parent. The pairing of copies from mother and father seems to be crucial for activating the correct genes for brain development4.

“In the beginning, we paid more attention to see [effects of] the maternal duplication in mice,” Takumi says. “There is no difference between maternal and wild-type, so we were very disappointed.”

Takumi and other scientists are baffled as to why maternal duplications don’t cause autism-like behaviors. Some suggest the difference could be due to the way genes are controlled and expressed.

“Although all the genes are there, the higher-order control of expression could be different between mouse and human,” says Janine LaSalle, professor of microbiology and immunology at the University of California, Davis.

Unlike mice, humans have stretches of DNA between protein-coding genes that contain repeat sequences of nucleotides. These repeats may cause chromosomes to misalign during recombination in the egg and sperm, and can thus affect how much or little of a gene is expressed. They may also make the region susceptible to deletions and duplications, LaSalle says.

Such large duplications seem to affect gene expression in unexpected ways. In the new mice, for example, those with maternal duplications show the expected over-expression of UBE3A.

LaSalle’s group found the opposite, however, when they analyzed brain tissue from a deceased woman with autism. Despite having two extra copies of most of the 15q11-13 region, the woman’s tissue shows an unusually low expression of several genes in the region, including the UBE3A and GABA receptor genes5. That suggests that epigenetic changes — such as chemical modifications to DNA — could trigger features of autism, LaSalle says.

From gene to protein:

Despite these differences, researchers say the new mouse model has promise because it is one of the few that includes copy number variations — large deletions, duplications and rearrangements of DNA — associated with neuropsychiatric disease. Copy number variations have been estimated to occur in about ten percent of people with non-inherited autism6.

“Nowadays we know that many cases of autism and neuropsychiatric disease [are] caused by de novo copy number variations,” Takumi says.

To help other researchers build on his group’s findings, Takumi has donated a colony of mice to Lawrence Reiter, assistant professor of neurology at the University of Tennessee in Memphis. Reiter plans to run preliminary gene expression and behavioral tests on the colony’s offspring in the next few months.

In particular, Reiter will be looking at the downstream interactions of UBE3A, whose loss has been associated with autism-related disorders. Using mice missing the gene, in 2006 he found that ECT2 — a protein that interacts with the protein product of UBE3A — is abnormally expressed in the hippocampus, a brain region that regulates learning and memory, and in the cerebellum, an area that helps control movement7.

Studying the molecular effects of the duplication will be particularly important, he adds, because Takumi’s group could not find any obvious differences in cell number or brain size in the mutant mice.

“There could be subtle molecular defects that have more to do with the location of a protein than gross neurological abnormalities,” Reiter says.

Reiter is also gauging the function of the cerebellum by measuring the frequency of the animals’ licking behavior. “There is clearly cerebellar involvement in autism, but we don’t entirely understand all aspects of cerebellar function yet,” he says.

He is working on engineering his own mouse mutants that over-express UBE3A, but Takumi’s 15q11-13 mice will allow him to start experiments sooner.

“These mice give me a chance to look at UBE3A over-expression before I even finish making my own mice,” he says. “That was really lucky.”