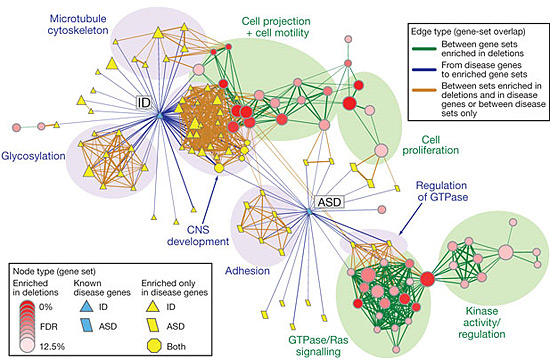 People with autism harbor more copy number variants (CNVs) — deletions or duplications of large chunks of DNA — compared with controls, but only in the protein-coding regions of the genome, researchers reported Wednesday in Nature1. The study also pinpointed more than 100 new risk genes for autism.

CNVs can be thousands or millions of base pairs long and encompass whole genes or even multiple genes. “We’ve seen over the last five years or so a growing recognition that copy number changes of this type play an important role in the etiology of autism,” says Arthur Beaudet, chair of molecular and human genetics at Baylor College of Medicine, who was not involved in the study. “These kinds of reports are appearing at a rapid pace, [though they are] rarely as large and as extensive as this one.”

The researchers used high-resolution microarrays to scan about 1 million locations in the genomes of 996 people with autism spectrum disorders and 1,287 controls. The study is part of the Autism Genome Project, a repository of genetic samples and phenotype data from more than 7,500 families with a history of autism.

Altogether, the researchers found more than 200 different single-gene CNVs present in people with autism but not in controls.

Each of those CNVs is rare — present in less than one percent of the study population. “It really is pointing again to this idea of many, many genes, each of which may rarely have a mutation, but each of them is important in increasing risk,” notes Anthony Monaco, head of the Neurogenetics Laboratory at Oxford University’s Wellcome Trust Center for Human Genetics.

Previous studies have shown that people with autism carry more de novo CNVs — meaning they are not inherited from parents — than does the general population. This study is the first to show that individuals with autism have a higher overall burden of CNVs, but only in protein-coding exons.

“That’s really important — the fact that only 1.6 percent of the genome is exons, and the burden was only seen in the exons of the genes,” notes lead investigator Stephen Scherer, director of the Centre for Applied Genomics at The Hospital for Sick Children in Toronto, Canada. That means many of the genes in these regions are likely to have a functional connection to autism, he says.

Intriguingly, this may be a pattern common to other neuropsychiatric disorders. A 2008 study similarly found that people with schizophrenia have a higher burden of CNVs in exons compared with healthy controls2.

Because the autism study implicates a large number of genes, the researchers used bioinformatic analysis to study how they fit together in pathways. Although it’s not clear which of these pathways will turn out to be the most important in autism, “[The researchers] are laying down the map, and that’s going to point us in directions to go,” says James Lupski, vice chair of molecular and human genetics at Baylor College of Medicine, who was not involved in the study.

Some of the genes identified in the study are part of biochemical pathways already known to be related to autism — genes for cell proliferation, projection and motility, for example, which are involved in how nerve cells form connections. Other CNVs point to pathways that haven’t been implicated in autism before, such as GTPase/Ras signaling, through which neurons respond to external stimuli.

Although many different CNVs may be involved in autism, Scherer says, “the genes that they’re hitting cluster into these connected pathways.” Each individual with autism may have a different combination of the CNVs, he adds. “Perhaps most families have their own rare ‘fingerprint,’ if you will.”

Participants in the new study meet stringent diagnostic criteria for autism and many have severe symptoms of the disorder, however. It’s not clear whether the same overlap also exists in the broader population of people with autism and related disorders. The team plans to study a more diverse autism population to address this question.

Last month, German researchers separately identified CNVs in the SHANK2 gene, one of the candidates in the new study, in a study of 396 individuals with autism. But overall, the genes don’t show much overlap with candidates identified in previous studies, primarily through scans of single-nucleotide polymorphisms, or SNPs. More research will be needed to sort out why these two methods generate divergent results.

Because these CNVs are rare, researchers will also need to study many more families to find all of the relevant mutations. The researchers plan to analyze the genomes of another 1,500 families. Other types of studies, which involve sequencing the protein-coding parts of the genome, will also be necessary to find mutations that contribute to autism. “We still have a lot more discovery to go,” Monaco says.