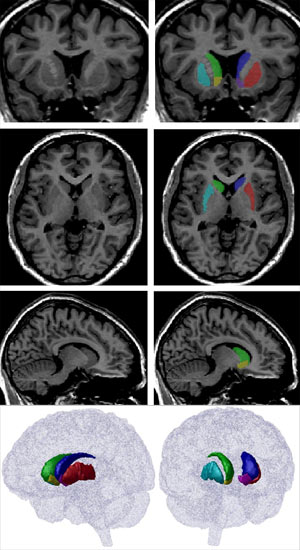 Size matters: The volume of the caudate nucleus, a part of the striatum, correlates with the repetitive motions seen in those with autism. Pictured above are cross sections of the striatum from the front, from above and from the side, and a 3D rendering of the structures.

A larger head is one of the most common — and controversial — physical characteristics of people with autism.

Noted in the original description of autism by Austrian psychiatrist Leo Kanner in 19431, a large head circumference has been found in roughly 20 percent of autism cases2 — but its significance remains unclear.

“There is nothing else besides head size that is biological that affects such a large percentage of autistic kids — yet it is still a mystery how a disorder that is so heterogeneous yields such similar clinical manifestations,” says Flora Vaccarino, a neurobiologist at the Child Study Center at Yale University.

Vaccarino is one of a growing group of scientists who suggest that an altered trajectory of brain development may turn out to be one of the most reliable biomarkers of the disorder.

Although the head overall is bigger in some children with autism, researchers have found more informative differences in size — some smaller, some larger — across regions of the brain. Based on magnetic resonance imaging (MRI), several papers in the 15 August issue of Biological Psychiatry detail these differences.

A third paper — the first longitudinal study of brain volume and cortical thickness in autism, led by Antonio Hardan, associate professor of psychiatry at Stanford University — found a thinning of the cortex when comparing MRI scans of 18 boys with autism and 16 normally developing boys, ranging in age from 8 to 12 years, over a 30-month period5.

These results bolster a hypothesis about brain growth pattern, first introduced in a 2005 meta-analysis conducted by neuroscientist Eric Courchesne: Babies with autism have normal head size at birth, followed by rapidly increasing brain size until 2 years of age, and ending abruptly by age 4, when the brain slowly begins to decrease in size6.

The analysis is one of the most important pieces of autism research in recent years because it makes clear the importance of coordinating data across age — and of catching any culprits of this disorder early in development, says Karen Dobkins, director of the Infant Vision Laboratory at the University of California, San Diego (UCSD).

Although brain size is a hot topic among autism researchers, the discovery that the trajectory of brain growth is important has helped researchers rethink how the disruption of brain development may be linked to behavioral symptoms of the disorder, says Vaccarino.

Region-specific measures detailed in the new papers provide insight into the brain regions that control behaviors characteristic of autism.

For example, repetitive and stereotyped behavior has been associated with the striatum in various neuropsychiatric disorders, although not yet conclusively in autism. The researchers found that it is the volume of the caudate nucleus, the part of the striatum believed to modulate motor activity and mediate behavior, that correlates most strongly with the insistence on sameness seen in those with autism, particularly between 6 and 12 years of age.

By focusing on the regions most relevant to a specific behavior characteristic of autism, researchers hope to find some of the structural variations that underlie this complex disorder.

“We thought confining our work to a symptom such as repetitive disorders, rather than the whole disorder, might be a promising way forward,” says Marieke Langen, first author of the striatum paper and a postdoctoral fellow at the Rudolf Magnus Institute of Neuroscience in Utrecht.

Hardan’s longitudinal study examined the relationship between changes in cortical thickness over time and clinical features of the disorder. Interestingly, she found that a greater decrease in frontal lobe cortical thickness results in a greater lack in socio-emotional reciprocity, a measure of a person’s ability to respond to social signals and to other people’s emotions.

“Longitudinal studies like Hardan’s are terrifically important to assess long-term outcomes,” says Courchesne, a neurobiologist and director of the Autism Center of Excellence and Healthy Infant Development Laboratory at UCSD.

The inclusion of behavioral measures opens up studies on the relationship between structural abnormalities and clinical symptoms, but Hardan’s study focused on adolescents well past the crucial ages of 2 to 4 years, when the disorder becomes evident.

There is a paucity of studies on the young autism brain. Of six Autism Centers of Excellence funded by the U.S. National Institutes of Health, the UCSD center is the only one dedicated to studying the development of the infant brain.

Nearly every brain imaging study has instead been conducted on autism brains at least ten years after onset of pathology. “If we ever want to identify the cause of this brain disorder, we have to study autism at the time it first occurs,” says Courchesne.

Fortunately, several researchers are turning their attention to children between ages 2 and 4 years.

For example, Dobkins is following the development of the siblings of children with autism who are at a higher risk of developing the disorder.

At the International Meeting for Autism Research in May, her team presented data indicating high-risk siblings who go on to develop autism tend to have an abnormally large head size. “Our data uses a crude measure of head circumference, but suggests that brain size does infer risk for developing autism,” she says.

One lesson they have learned, she says, is to compare head size in high-risk babies not to numbers set by the US Centers for Disease Control and Prevention (CDC), but to location-specific controls.

“CDC norms are averaged over a gazillion babies across all socio-economic strata, but it is a mistake to compare autistic kids recruited from one geographic location to that norm,” she says.

What causes the peculiar pattern of brain growth in autism is as yet unknown.

Greater numbers of neurons or glial cells, the supporting cells of the nervous systems, alterations in the formation of a myelin sheath around nerve fibers, and aberrant formation or pruning of synapses are all logical suspects.

There could be multiple causes or genes that converge on multiple pathways of brain development. “We need longitudinal studies combining genetic, neuroimaging and cell biology studies together on the same kids to understand what’s going on with autism,” says Vaccarino.

For example, the Hardan paper suggests that synaptic development and maturation play a role in the excessive thinning of the cerebral cortex — in part because recent studies have linked several genes involved in synapse formation, such as SHANK3, to autism.

Vaccarino suggests that genes related to development, such as regulators of neural cell growth and survival, are worthy suspects. Research she published last year suggests that fibroblast growth factors, a family of genes that regulate cortical size and connectivity, may increase the number of neurons that underlies larger brain volume7.

Additional clues are pointing to genes involved in brain development. For instance, common, natural variations in the MeCP2 gene can alter cortical surface area in two independent normal human populations, according to a study published 26 August in the Proceedings of the National Academy of Sciences8.

Mutations in MeCP2 are known to cause Rett syndrome, an autism spectrum disorder characterized by small head size. MeCP2 has also been linked to autism, which allows researchers to explore how variations in one gene are responsible for differing brain size in two neurological disorders. “We’re convinced variation in this gene influences brain size,” says Nicholas Schork, one of the study’s lead authors.

In collaboration with Courchesne, Schork plans to sequence the gene and search for rare variations that contribute to disease.

Still, genetic studies won’t provide much insight into the disorder unless data are collected along a developmental trajectory, sorting out true anomalies from short-lived, natural variations, the researchers say.

“My prediction is this isn’t the end of the story: Autism is complicated, and these crude markers, such as head size, revealed the tip of the iceberg,” says Courchesne. “Once we find far better indicators, I think the field as a whole will rapidly progress. “