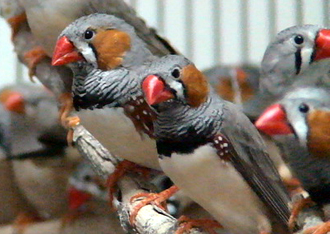 Social songs: Like human language, zebra finch song is complex and has an important social purpose, making it an interesting avenue for autism research.

Social songs: Like human language, zebra finch song is complex and has an important social purpose, making it an interesting avenue for autism research.

Male zebra finches have high levels of contactin associated protein-like 2 (CNTNAP2), a protein that has been linked to autism and language disorders, in a key song-related area of their brains, according to unpublished researchpresented in a poster sessionSunday at the 2011 Society for Neuroscience annual meeting in Washington, D.C.

The work is an example of the growing interest in songbirds as a model species for autism-related language impairment.

Some researchers are turning to birds because language impairment is difficult to study in more common model species such as mice. “Zebra finches do have something like speech, and it’s song learning,” says Michael Condro, a graduate student in the laboratory of Stephanie White at the University of California, Los Angeles, who presented the poster.

By 3 months of age, young male zebra finches have mastered their own distinctive courtship song. They learn to sing by listening to and imitating adult males, much as humans learn to speak.

Also like human language, zebra finch song is complex and has an important social purpose. And the neural circuitry of communication is similar across the two species, involving a loop between the cerebral cortex, basal ganglia and thalamus.

“There’s no animal model that can address language” in disorders such as autism, notes Agenor Limon, assistant project scientist at the University of California, Irvine, who was not involved in the work. “They’re making a model that can express precisely what is going on here.”

There are few available molecular biology tools that can be used to manipulate unusual animal models such as the zebra finch. White and her colleagues lucked out: They found a commercially available antibody that binds to a part of CNTNAP2 that is the same across many species — including the zebra finch. This enabled them to track the location of the protein in three song-related areas of the finch’s brain.

In the robust nucleus of the arcopallium, or RA, CNTNAP2 expression is high in young males and remains so as the birds grow up, the researchers found. In female zebra finches, which don’t perform courtship songs, CNTNAP2 in the RA falls off rapidly after the birds are 25 days old. “We use that dimorphism to our advantage,” says Condro.

In another region, the striatopallidal nucleus area X, which is present only in the males, CNTNAP2 is expressed at relatively low levels.

In a previous study, the researchers found the same patterns of CNTNAP2 messenger RNA: high in the RA throughout development in males, and low in area X1.

But in a third region, the lateral magnocellular nucleus of the nidopallium (LMAN), CNTNAP2 mRNA is found at high levels, whereas the protein is relatively scarce. Because CNTNAP2 is expressed in the axons of nerve cells, it may be transported from the LMAN to another part of the brain, such as the RA, Condro says.

The researchers plan to use genetic engineering to lower CNTNAP2 expression in young male zebra finches, to see whether this affects their ability to learn to sing. In people, variations in CNTNAP2 have been linked to both the timing of language development and the risk for autism.

White’s team is characterizing in the zebra finch other genes, such as FOXP2, that have been linked to both autism and language difficulties.

It’s a promising effort, says Annemie Van Der Linden, director of the Bio-Imaging Lab at the University of Antwerp in Belgium: “Songbirds and autism are a good match.”