Autism-linked mutation may blur brain’s boundary between self, others 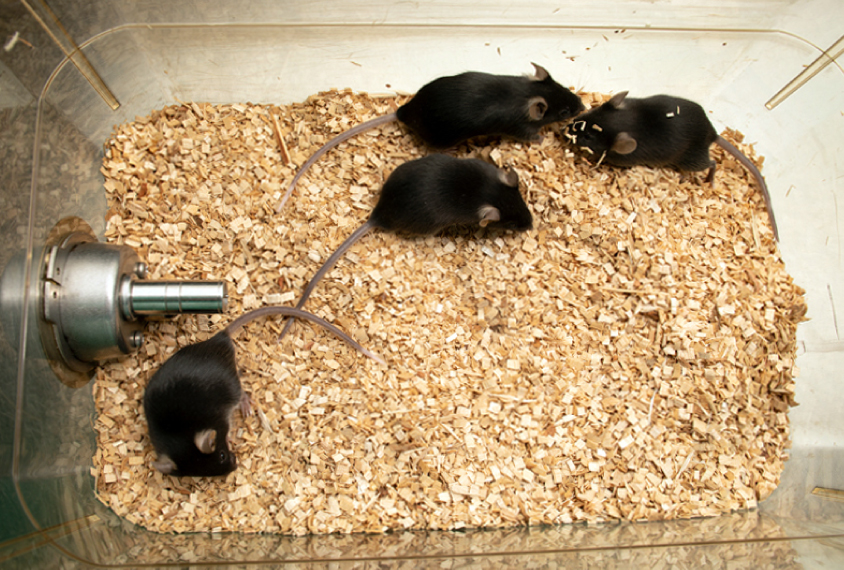 Social studies: Autism model mice have atypical social behaviors that may stem from how their brains process the sense of ‘self.’

A mutation in a top autism-linked gene disrupts the brain’s ability to distinguish between self and others, according to a new study in mice. Correcting the mutation restores social agency and boosts sociability, the study also shows.

The results offer hope that genetic therapies might also ease social difficulties in autistic people, says Camilla Bellone, associate professor of basic neurosciences at the University of Geneva in Switzerland, who was not involved in the study. “[It’s] very exciting.”

In the new work, Williams’ team engineered mice with a mutation in one copy of a gene called SHANK3, which is disrupted in more than 1 percent of people with autism. They designed the animals so that treating them with the cancer drug tamoxifen would repair the mutated portion of the gene.

The team put pairs of mice in a cage and presented them with different conditions: In one experiment, they gave only one mouse access to food; in another they put one mouse into a tight enclosure. In one mouse per pair, they recorded the activity of neurons in the medial prefrontal cortex (mPFC) — a brain region linked to social behavior and cognition.

The team looked for differences in neuronal activity in response to a recorded mouse’s experiences versus its cagemate’s experiences to determine the kind of information that each cell encodes. A neuron that changes its activity when a mouse is near food but not when the mouse sees another animal near food, for instance, is encoding information specific to the animal’s own experience, the researchers say.

Among mPFC neurons that encoded information about the experiment, about 26 percent in wildtype mice responded uniquely to the animal’s own experiences, and a similar proportion — 30 percent — showed specificity for another mouse’s experiences, the team found.

In the SHANK3-deficient mice, however, 38 percent of the cells encoded an animal’s own experiences, whereas only 9 percent encoded those of other animals. The model mice were also significantly less social than their wildtype peers.

And whereas wildtype mice had subsets of neurons that differentially responded to their own experiences versus another’s — with little overlap — most of the model mice’s cells responded to both, the team found. The results appeared in Nature Neuroscience this week.

The SHANK3 mice had a “diminished ability to encode information about the experience of other animals,” Williams says.

Williams and his colleagues then used tamoxifen to reinstate the model mice’s SHANK3 gene and ran the experiments again.

The proportion of neurons representing other animals’ experiences gradually increased in the model mice, reaching wildtype levels by week five post-treatment. Also by that point, the sets of neurons encoding self versus other showed little overlap. And the shift in neuronal representation correlated with the animals becoming more social, the team found.

Selectively activating SHANK3 in the mPFC rather than across the whole brain gave the same results, which suggests the mPFC could be a therapeutic target, says Zhanyan Fu, group leader in synapse and circuit electrophysiology at the Broad Institute in Cambridge, Massachusetts, who was not involved in the study.

Targeted therapies are the ultimate goal, Williams says. “We don’t want to say that restoring sociability in everybody is the right thing to do. But in individuals where it’s truly disrupting their life … at least [a clinical treatment] gives you one tool” to help.

Williams and other researchers are homing in on the best brain regions to target, but it’s still unclear how a mutation in SHANK3, which codes for a protein that provides structural support at synapses, leads to atypical social behaviors, he says.

Some social differences in SHANK3-deficient mice stem from dysfunction within excitatory cells in the anterior cingulate cortex, a region adjacent to the mPFC, according to previous work by Fu and others. And several previous studies have shown altered function of inhibitory interneurons in the mPFC of other mouse models of autism — supporting the notion that an imbalance of excitation and inhibition may contribute to atypical social behaviors, she says.

Future studies should explore these mechanisms further and look into whether the cells encoding information about an animal’s own experiences versus another’s receive signals from different types of presynaptic neurons, circuits or brain regions, Fu says. “There are more puzzle pieces we need to think out and eventually put together.”