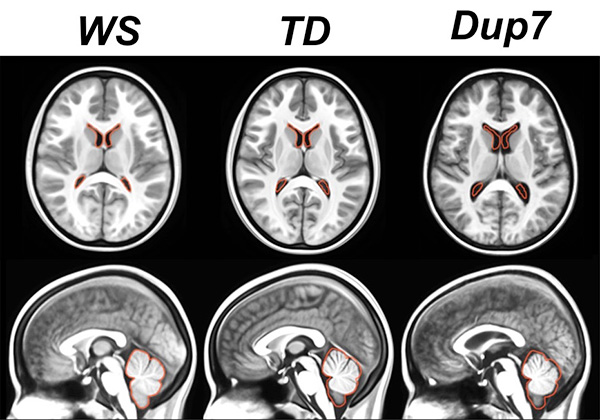 Size matters: Children with Williams syndrome, who have a deletion of the 7q11.23 chromosomal region, have smaller ventricles and larger cerebellums than those with duplications of the region.

Deletion or duplication of 7q11.23, a chromosomal region linked to Williams syndrome and autism, alters the size of several brain structures, according to unpublished data presented today at the 2014 Society for Neuroscience annual meeting in Washington, D.C.

Children with Williams syndrome lack one copy of 7q11.23, which includes about 26 genes. They tend to have small brains overall and are extremely social. Children with the duplication — that is, three copies of 7q11.23 — have bigger brains than normal and social phobia. Many of them have autism.

In the new study, researchers used structural magnetic resonance imaging to look at the size of brain structures in 19 children with Williams syndrome, 7 children with 7q11.23 duplications and 46 controls, all of whom have intelligence quotients in the normal range. They focused on the lateral ventricles — fluid-filled spaces in both brain hemispheres — as well as several brain structures implicated in autism, such as the amygdala, the basal ganglia, the hippocampus and the cerebellum.

The children with Williams syndrome have smaller ventricles and basal ganglia than controls do, but a larger cerebellum, hippocampus and amygdala. Those with the duplication show the opposite trend, with bigger ventricles and basal ganglia, but a smaller cerebellum, compared with controls. These children also have a smaller amygdala and hippocampus than those with Williams syndrome, but not compared with controls.

“This is the first time that there has been a group of these cases to make this comparison,” says Shane Kippenhan, an imaging scientist at the National Institutes of Health in Bethesda, Maryland, who presented the work. “It’s sort of an experiment of nature: You know what’s going on genetically and you have a really specific set of phenotypes.”

One boy with a particularly long duplication that extends beyond 7q11.23 has even bigger ventricles and a smaller cerebellum than children with the classic duplication of this region. Although he represents a single case, the researchers speculate that genes outside 7q11.23 may influence the size of brain structures and contribute to autism.

“We need to learn more about autism and its relationship to these genes,” says Kippenhan.

Overall, the findings suggest that genes in the 7q11.23 region have dose-dependent effects on various brain structures. The effects may help to explain the somewhat opposite symptoms seen in children with Williams syndrome and those with 7q11.23 duplications.

Correction: This article has been modified from the original. The researchers originally stated that the boy with the long 7q11.23 duplication has autism, but his diagnosis has not been confirmed.