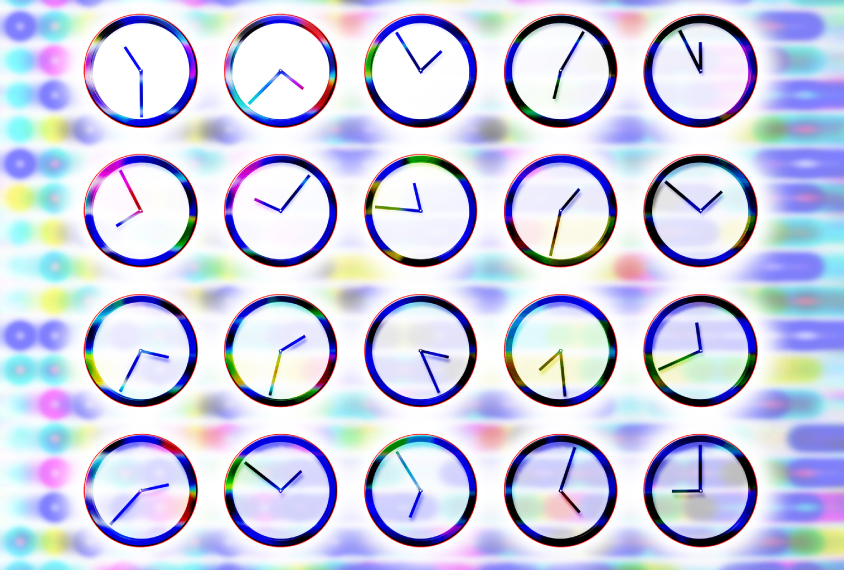 Shift workers: Some autism-linked genes tend to be highly expressed in certain parts of the brain in the evening or middle of the night.

Many autism genes have rhythmic patterns of expression in the brain over the course of a day, according to findings from a mouse study presented yesterday at Neuroscience 2022 in San Diego, California. The results lay the groundwork for further efforts to understand why many autistic people have disrupted circadian rhythms — body processes that have a 24-hour cycle — and problems with sleep, says Chang Hoon Lee, a neuroscientist in Joseph Takahashi’s lab at the University of Texas Southwestern Medical Center in Dallas, who presented the work.

Most of the other brain regions have gene expression rhythms that are remarkably aligned. The olfactory bulb and the cerebellum, however, are out of sync overall, and have 28 genes that peak in expression at the opposite time of day from that of the other regions.

Many autism-linked genes belong to a set of rhythmic genes that are highly expressed in the suprachiasmatic nucleus in the evening and in other brain regions in the middle of the night, the researchers found.

“This is the key data,” Lee says. It could provide hints about which autism-linked genes are involved in circadian rhythm and sleep disruptions, and which brain regions they act in.

Lee and Takahashi also examined gene expression in more than 120,000 individual cell nuclei taken from the frontal cortex, a region that contributes to language, social behavior and communication, functions that are altered in autism.

“The neuron is the key player that contributes” to the patterns of rhythmic gene expression identified in the tissue samples, Lee says of that analysis.

The methodology of the study is demanding, says Erik Herzog, professor of biology at Washington University in St. Louis, Missouri, who was not involved in the work but studies circadian rhythms. “This will be a very valuable dataset for a wide variety of researchers,” he says.

A second study presented yesterday implicates circadian rhythms in autism: Mice lacking one copy of BMAL1, one of the most important genes regulating the body’s internal clock, have characteristics reminiscent of autism, including repetitive behaviors and social and motor problems. Their traits are similar to — though in some cases less pronounced than — those of mice lacking both copies of BMAL1.

The results show that disrupting just one copy of the gene “is sufficient to cause [autism]-like behavioral alterations in mice,” Abhishek Mishra, a postdoctoral researcher in Ruifeng Cao’s lab at the University of Minnesota in Duluth, said when presenting the study.

This mouse model, which lacks one copy of the gene, is “a more true-to-life model,” he told Spectrum.

Some people with autism have alterations in the BMAL1 gene, but a complete loss of gene function “is not very common in the population,” added Rubal Singla, a graduate student at the University of North Carolina at Chapel Hill who previously worked on the project as a visiting scholar in Cao’s lab.

Mice lacking one copy of the gene have 50 to 75 percent less BMAL1 protein in the brain than wildtype mice do. They also have elevated activity of mTOR, a protein involved in circadian regulation, throughout the brain, and reduced levels of other circadian proteins. The findings are detailed in a paper published in the International Journal of Molecular Sciences in June.