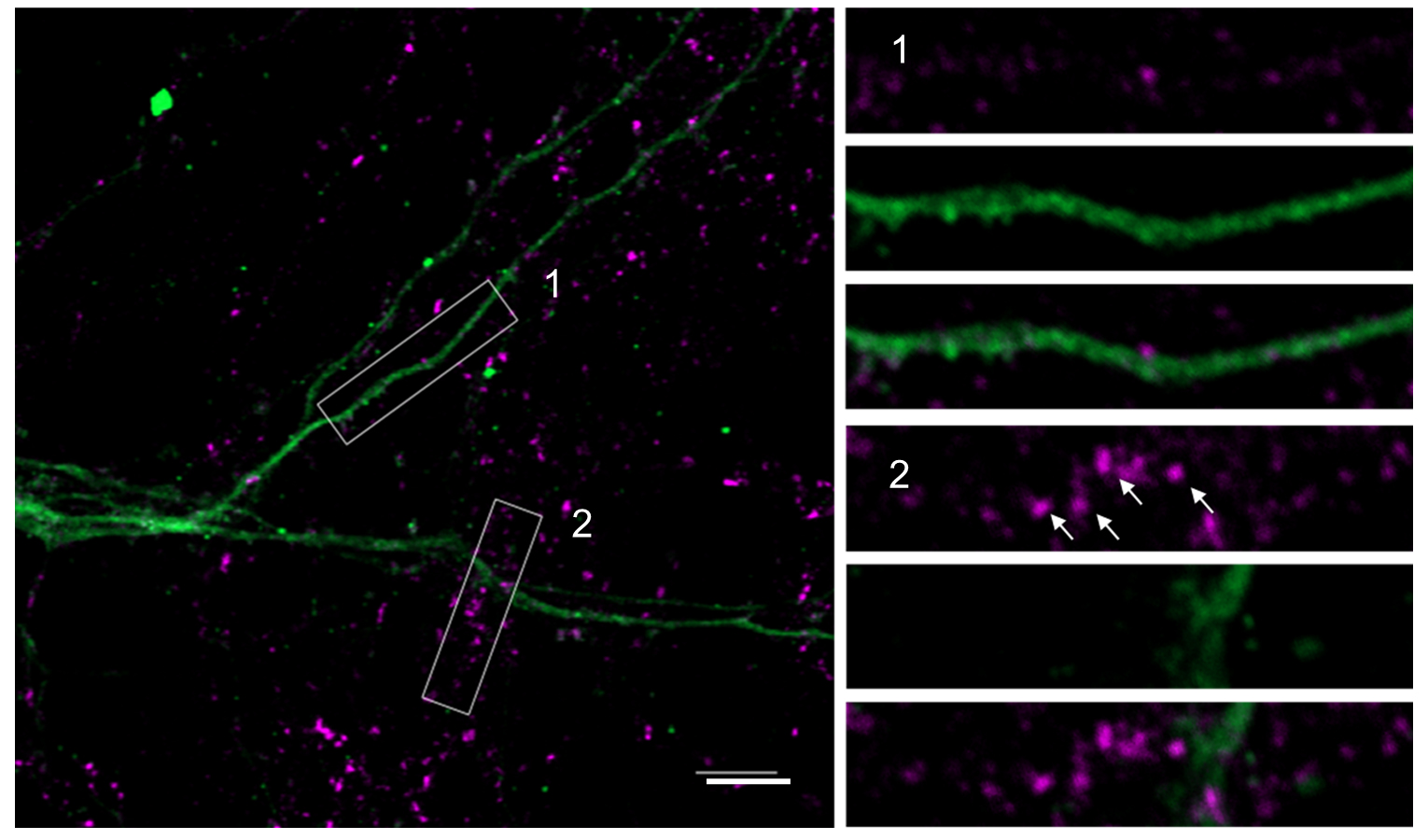 Stress test: High expression of the protein HOMER1A (1, green) exaggerated the loss of SHANK3 (2, pink) from synapses in stressed mice with a mutated copy of the SHANK3 gene.

Stressful situations induce social deficits in mice with a mutated copy of the autism-linked gene SHANK3, according to a new study. Eliminating a stress-related protein that regulates SHANK3 restores typical social functioning in the animals, the work also shows.

This connection may help to explain why new environments and social interactions can be uniquely stressful for people with SHANK3 mutations, the researchers say.

SHANK3 encodes a protein that serves to scaffold other proteins at synapses. One such protein is HOMER, which helps to tether receptors for the signaling molecule glutamate.

HOMER1A, a shorter form of HOMER that is expressed only during stressful experiences and other select circumstances, reduces SHANK3 protein levels at synapses, the new study shows. Removing both copies of the gene that encodes HOMER1A from mice missing SHANK3, however, partially restores SHANK3 levels at synapses.

“When we knock down HOMER1A in SHANK3-deficient mice, we allow the system to return back to balance,” says co-lead investigator Alena Savonenko, associate professor of pathology at Johns Hopkins University in Baltimore, Maryland.

Previous work had pointed to this relationship between HOMER1A and SHANK3, but the genes’ effects on mouse behavior had not been explicitly studied, says Kimberly Huber, professor of neuroscience at the University of Texas Southwestern Medical Center in Dallas, who was not involved in the work.

“We kind of knew that HOMER1A can compete with these scaffolds and that it can disrupt them,” she says, “but I think showing that it can regulate social behavior and actually impact SHANK3 levels in an experience-dependent model, that seems pretty novel to me.”

The results also suggest that therapies that reduce stress in people with Phelan-McDermid syndrome, an autism-linked condition caused by mutations in SHANK3, might ease some traits of the condition, Huber says.

Savonenko and her team put the SHANK3 mice and controls through a brief but stressful experience: swimming for six minutes in a small container of water. They then returned the mice to their cages for a four-hour rest period. They analyzed gene expression levels in the excitatory neurons of half the mice and put the rest of the animals through social behavior tests.

Stress more potently induced HOMER1A expression in SHANK3 mice than in wildtype controls, and it more strongly dampened SHANK3 levels at synapses, the team found. Compared with controls and unstressed SHANK3 mice, the stressed SHANK3 mice also showed less of a preference for another mouse over an inanimate object, suggesting that stress had disrupted their social motivation.

“It really is a nice genetic-environmental interaction,” says Valerie Bolivar, research scientist at the New York State Department of Health’s Wadsworth Center in Albany, who was not involved in the work.

Some of the study’s behavioral data are not strong, however, says Mu Yang, assistant professor of neurobiology at Columbia University, who was not involved in the work. The amount of time the SHANK3 mice spent investigating an unfamiliar mouse was not obviously affected by stress, for instance, and the proximity measurement on which the study’s conclusion was drawn was poorly defined, “making it difficult to evaluate the robustness of the finding,” Yang says.

Savonenko and her team plan to follow up on this study by investigating the effects of social stress on SHANK3 mice and other mice with genetic mutations.