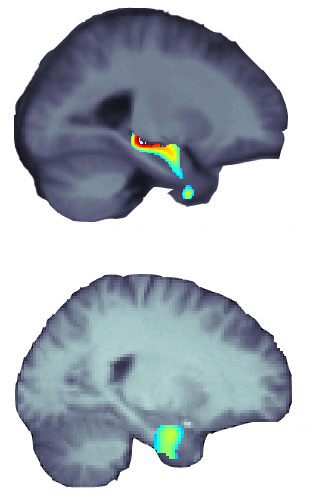 Old and young: A variant in an autism-linked gene decreases the size of the temporal lobe in both older (top) and younger people (bottom).

People with a certain variant in RBFOX1, a gene linked to autism risk, have a smaller temporal lobe than those with other variants, according to research presented Monday at the 2012 Society for Neuroscience annual meeting in New Orleans.

The findings, which are the product of brain imaging of nearly 700 individuals — including twins and their non-twin siblings — are the latest in a string of reports linking variations in autism risk genes to brain structure in people with or without the disorder.

“One thing that is quite surprising to me is that in our imaging genetics studies, we keep implicating autism risk genes,” says senior investigator Paul Thompson, professor of neurology at the University of California, Los Angeles. “So maybe they are really ‘brain risk’ genes.”

RBFOX1 is expressed in neurons and modifies the sequence of hundreds of genetic messages.

In the new study, the researchers used a method called tensor morphometry to analyze volume in different parts of the brain. They found that people with a RBFOX1 variant called rs9933137 have a smaller temporal lobe, most notably in the hippocampus — a brain area important for learning and memory — and smaller frontal lobes, than people who carry other variants of the gene.

Thompson is part of a group that reported in September that a common autism-linked variant in the MET gene weakens connections between brain areas involved in social behavior. The effect is particularly strong in people with autism. And a 2010 study found that a variant in CNTNAP2, another gene strongly linked to autism, also alters connectivity, both in people with autism and without.