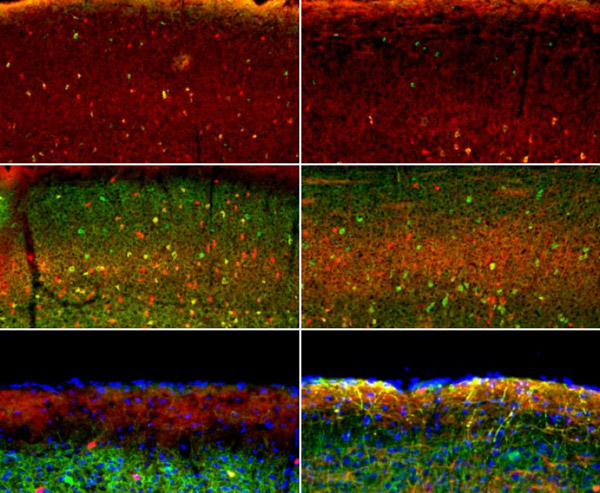 Mice missing PTEN, a strong autism candidate gene, in a subtype of inhibitory neurons in one part of the brain show signaling abnormalities and social deficits. Researchers presented the unpublished results yesterday at the 2014 Society for Neuroscience annual meeting in Washington, D.C.

An estimated 7 percent of children who have both autism and enlarged brains, or macrocephaly, carry mutations in PTEN — a gene best known for its role in cancer. A 2012 study showed that mice missing one copy of the gene in their brains have social impairments.

In the new study, researchers looked specifically at the effects of deleting PTEN from a subtype of neurons called interneurons. These cells dampen excitatory signaling in the brain. Many studies have suggested that problems with interneurons in the cortex lead to the imbalance of excitatory and inhibitory signals seen in autism.

The researchers created mice lacking PTEN in the medial ganglionic eminence, a brain region that gives rise to interneurons in the developing cortex. These mice spend less time interacting with new objects and other mice — behaviors that recapitulate some of the social impairments seen in autism.

Mature interneurons from this brain region mainly express either parvalbumin or somatostatin, which serve as markers of these subtypes. Parvalbumin neurons tend to fire quickly in response to signals, whereas the somatostatin ones respond more slowly.

In control mice, the ratio of these two subtypes is about 50:50. By contrast, the mutant mice show a dramatic decrease in the number of interneurons expressing somatostatin. This results in an excess of abnormally large cells expressing parvalbumin.

Despite an overall loss of interneurons, the mice have more inhibitory signals than controls do, skewing the signaling balance to excitation.

“There is evidence that this balance between excitatory and inhibitory signaling is altered in autism by the high rate of epilepsy associated with the disorder,” says Daniel Vogt, a postdoctoral researcher in John Rubenstein’s lab at the University of California, San Francisco who presented the work.

To rule out the possibility that support cells in the brain, such as glia, are causing these irregularities, the researchers transplanted the mutant interneurons into the brains of normal newborn mice. Even in this new environment, the interneurons mature predominantly into parvalbumin cells with overly large cell bodies.

In another experiment, the researchers took interneurons lacking PTEN from embryonic mice and introduced a version of any one of five PTEN mutations seen in people with autism. They then transplanted these cells into the brains of newborn mice.

“We are now beginning to understand how many autism candidate genes regulate similar processes and signaling pathways,” says Vogt. “We hope that as our screening of mutations grows, we will be able to observe similar patterns that will uncover the basic biology underlying the multitude of phenotypes in autism.”