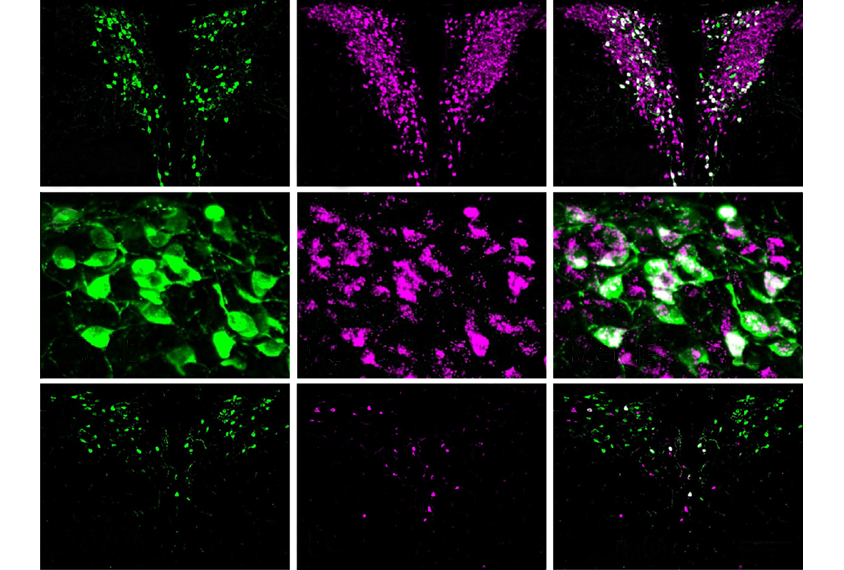 Parallel paths: Parvocellular (green) and magnocellular (pink) oxytocin neurons work alongside each other and seem to play different roles in social-reward behavior.

Two types of neurons process social information, a new mouse study suggests, but only one is disrupted in mice missing the autism-linked gene FMR1.

The neurons reside in a brain region called the hypothalamus, and both send signals via the hormone oxytocin. The deletion of FMR1, however, affects these cells differently: The loss of FMR1 in the smaller, ‘parvocellular’ neurons diminishes the mice’s interest in social interactions — but only those involving peers, the new work shows. The gene’s loss from the larger, ‘magnocellular’ neurons, by contrast, does not disrupt the animals’ interactions with either peers or parents.

“There are a lot of different types of social behaviors, and not all of them are impaired in autism,” says lead investigator Gül Dölen, assistant professor of neuroscience at Johns Hopkins University in Baltimore, Maryland. Whereas peer-to-peer social interactions are troublesome for many autistic people, other social interactions — such as parental connections — are on par with those seen in non-autistic people, she says.

“There are these two different kinds of neurons that we’ve known about for a really long time, and each of their contributions to social behavior has never really been dissected out,” says Larry Young, chief of behavioral neuroscience and psychiatric disorders at Emory University in Atlanta, Georgia, who was not involved with the study. “It’s really important for the future of drug development.”

Typical mice prefer the chamber with social bedding over the one with solitary bedding, regardless of whether their cagemate was a peer or a parent figure, the study shows. Mice missing a copy of FMR1, however, preferred social bedding only after interactions with parent figures.

These results suggest that social-reward behavior involves oxytocin signals sent by parvocellular neurons but not magnocellular neurons, says Daniel Quintana, senior researcher in biological psychiatry at the University of Oslo in Norway, who was not involved in the work. “Previous to this study, parvocellular oxytocin neurons were generally thought to regulate non-social functions, like yawning and feeding.”

The future of psychiatry will be about identifying specific circuits in the brain, not just molecules, and targeting them with drugs, Young says.

“Right now we’re stuck in the dark ages for oxytocin,” he says. “One day we might have a drug that can specifically target this specific set of neurons that might really affect social reward.”

“I don’t know that we know that for sure,” Young says about whether the mixed trial results reflect intranasal oxytocin reaching only magnocellular neurons. “But [intranasally delivered oxytocin] definitely would be more distributed and not a specific effect,” he suggests as an alternative.

Armed with new insight, Dölen and her team plan to revisit therapies for fragile X syndrome that target a receptor called mGluR5. This approach had shown promise in mice but flopped in clinical trials.

“We want to see if there’s some difference in the way the two oxytocin neurons are responding to mGluRs,” she says.