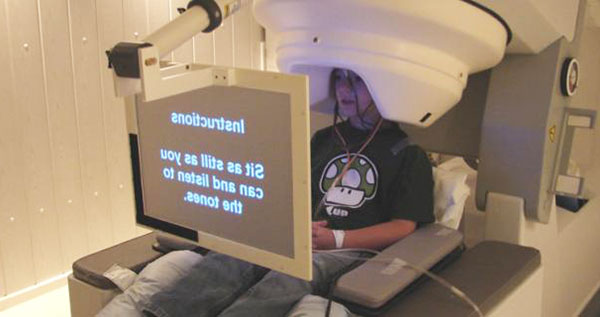 Sounding off: Measurements of the brain’s response to sound can distinguish between children with different 16p11.2 variants.

Some children with autism process sound a split second slower than typical children do. This sensory quirk has sparked a theory that language impairments associated with autism stem from a subtle delay in hearing, and may even represent a biomarker for the disorder that can aid diagnosis. But researchers have struggled to explain why this delay occurs and whether it contributes to any autism symptoms.

A new study provides a piece of this puzzle by homing in on the delay’s genetic roots. It finds that the brains of children missing a copy of the chromosomal region known as 16p11.2 process sound more slowly than controls do. Children with an extra copy of the region do not show this delay. The results were published 11 February in Cerebral Cortex1.

“We’re basically suggesting that some genes or some genetic material in that 16p11.2 region may have a role in making the biological pathway that’s necessary for efficient neural responses,” says lead researcher Tim Roberts, professor of radiology at the Children’s Hospital of Philadelphia, who first reported the hearing delay in autism more than a decade ago2,3.

Roughly 1 percent of children with autism have deletions or duplications of 16p11.2 — a 600-kilobase stretch of DNA that includes 29 genes. But these variants don’t always lead to autism. In fact, less than one-fifth of people who carry them have the disorder, with many others showing language impairments, developmental delay or other neurodevelopmental disorders.

Roberts and his team took advantage of this genetically similar, behaviorally diverse group to tease out the origins and effects of the hearing delay. “It’s helping us straddle the chasm between genes and behavior,” Roberts says.

The findings also reveal that the delay is not specific to autism, as it is similar in children with 16p11.2 variants regardless of whether they have the disorder. As a result, they cast doubt on the idea that the delay is an autism-specific biomarker, says Elysa Marco, associate professor of neurology at the University of California, San Francisco, who was not involved in the study.

The researchers used a technique called magnetoencephalography (MEG) to assess how quickly each child’s brain responds to tones of different frequencies. The technique measures the magnetic fields that arise from the electrical activity of neurons firing together. A spike in the magnetic signal known as M100, which typically occurs about 100 milliseconds after a sound is produced, indicates that a person has heard a sound.

The researchers found that the M100 response is delayed by about 23 milliseconds in children carrying a 16p11.2 deletion, compared with controls or children with a duplication. “This delay is a sign that neural signals are not going as fast as they should be,” Roberts says. “The hypothesis is that this cascades into later and later delays, and ultimately behavioral impairments.”

The lag may sound minor, but most people typically talk at a rate of 250 milliseconds per syllable. “The auditory system is going to be quite overwhelmed if it has to deal with a delay,” says Tal Kenet, an instructor in neurology at Harvard Medical School. Kenet was not involved in the study, but uses MEG to monitor brain responses to other sensory stimuli.

Children with a 16p11.2 duplication process sound slightly faster than controls do, but the difference is not statistically significant.Still, it suggests that deletions and duplications of the region may have opposite effects on sound processing, Roberts says.

How these differences affect behavior is unclear. The researchers found that children who have a deletion do not score differently from those who have a duplication on tests of cognitive skills and language ability.

“It’s somewhat disappointing that it doesn’t give a clear correlation between neurophysiology and behavior,” Marco says.

But the M100 response is just the first step in sound processing. “Lots of other things intervene before we get to a behavior,” Roberts says.

A different MEG measure of the brain’s response to sound, known as the mismatch field latency, tracks more closely with language ability in children with autism. Roberts’ team is investigating this response in children with 16p11.2 variations.

His team is also exploring whether arbaclofen, a drug being tested for autism and fragile X syndrome, can improve the M100 response. If so, that response may serve to determine an optimal dose for the drug in clinical trials, for example.