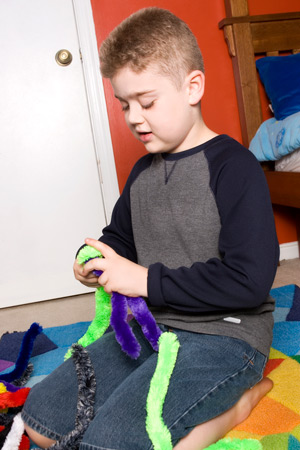 ©iStock.com/ktaylorg Multi-gene effect: The large head size seen in people with a deletion of the 16p11.2 genetic region may arise from interactions among multiple genes.

Deletion or duplication of 16p11.2, a chromosomal region linked to autism, may trigger symptoms via the interactions of genes both within and outside the region at a key point in development. Researchers presented these preliminary results Sunday at the American Society of Human Genetics Annual Meeting in San Diego.

About 1 percent of people with autism have deletions or duplications, so-called copy number variations, in 16p11.2. People with deletions in the region tend to have enlarged heads and struggle with obesity, whereas those with duplications are prone to small head size and extreme thinness.

Both groups may have intellectual disability and autism symptoms. This suggests that people need a precise number of genes in this 600-kilobase stretch of chromosome 16 for normal development.

To pin down the function of these genes, the researchers deleted them one at a time in zebrafish embryos. Their 2012 study suggested that one gene in the region, KCTD13, may underlie the head enlargement seen in people with 16p11.2 deletions1.

But the effects of 16p11.2 CNVs are driven by more than the expression of a single gene, according to two posters presented Sunday. One set of results suggests that KCTD13 influences head size by binding to CUL3, another autism candidate. Two 2012 studies identified harmful mutations in CUL3 in three people with autism2, 3.

The researchers homed in on these two genes when they saw that CUL3 and KCTD13 have matching expression patterns in blood cells from people with 16p11.2 deletions. “The expression level of both of them changes dramatically, at the same time,” says Guan Lin, a postdoctoral fellow in Lilia Iakoucheva’s lab at the University of California, San Diego, who presented the findings. “We found a golden pair.”

Using an atlas of gene expression in the developing brain, Lin and his colleagues found that genes in the 16p11.2 region tend to be expressed in people during mid-fetal development — from about the third to the sixth month of gestation. A study published last year found a similar result for networks of autism genes.

The researchers then looked for genes that might function along with those in 16p11.2 — either because they are expressed at the same time, or because their corresponding proteins interact. These networks change as the brain develops, but don’t vary across brain regions.

They found that CUL3 and KCTD13 interact, but only at the end of mid-fetal development, around month 6. The two proteins also bind when expressed in yeast cells, but not if CUL3 carries the mutations seen in people with autism.

In an independent poster presented Monday, researchers showed that the effects of 16p11.2 deletions or duplications extend down the chromosome to a neighboring region.

The researchers used a sequencing technique that creates snapshots of regions of the genome that are in close proximity. Their findings suggest that the well-studied part of 16p11.2 loops around to contact genes in a segment about 650 kilobases away. A study published in June came to the same conclusion, using a database that maps the position of chromosomes in the cell.

“We see two regions interacting in 3D [three-dimensional] space being co-regulated and which seem to affect the same pathway,” says Alexandre Reymond, associate professor at the University of Lausanne in France, who presented the findings.

The researchers then looked at changes to the 3D structure of DNA in deletions and duplications of 16p11.2. They found that these changes displace 1,300 genes. The list includes 12 autism candidates that change in expression when 16p11.2 is deleted or duplicated; 4 of the genes have been linked to enlarged heads.