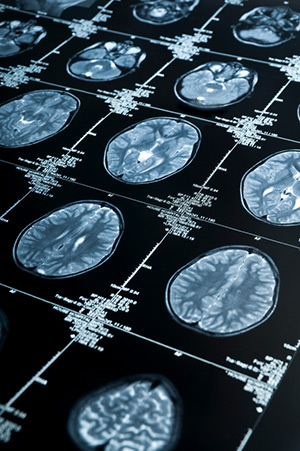 Growth area: Children with a deletion of the 16p11.2 autism-linked region have increased surface area in the outer folds of their brains.

The genes in 16p11.2, the autism-linked region on chromosome 16, may directly affect brain size early in development, according to unpublished research presented Thursday at the 2014 International Meeting for Autism Research in Atlanta.

Deletion of the region, which leads to autism in about 20 percent of people, results in enlarged brain size, a feature often seen in autism. The duplication results in an equivalent reduction in brain size.

The 16p11.2 region is a 600-kilobase stretch that encompasses 29 genes. About 1 percent of people with autism have a duplication or deletion, or copy number variant (CNV), of this region. Although only some people with the CNV have autism, all have psychiatric and neurological symptoms.

To unravel the importance of 16p11.2 in neurological disorders, researchers are thoroughly characterizing individuals with the deletion or duplication. So far, the project, dubbed the Simons Variation in Individuals Project (Simons VIP), has evaluated 113 people with a deletion and 107 with a duplication in the region. (The Simons VIP is funded by the Simons Foundation, SFARI.org’s parent organization.)

One arm of this venture is using magnetic resonance imaging (MRI) to scan the brains of all participants who are older than 8 years and can tolerate brain imaging. The researchers presented results Thursday from 17 adults, 19 to 54 years of age, with a duplication and 25 children, 8 to 17 years of age, with a deletion. They compared these data with those from 33 and 29 age-matched controls, respectively. Four of the children with a deletion and one adult with a duplication have autism.

Interestingly, the changes in brain size are also present in brain regions that form early in development, such as the thalamus, brainstem and cerebellum. This suggests that 16p11.2 may be involved in early embryonic development, says Abid Qureshi, a postdoctoral associate in Randy Buckner’s lab at Harvard University.

Similarly, changes to the cortex suggest an early developmental role for 16p11.2. The cortex is the outermost layer of the brain, and is involved in most higher-order cognitive functions. As the cortex forms during fetal development, it first folds upon itself, building a large surface area. General thickening of the area tends to take place later.