Autism genes may play key role in development of amygdala 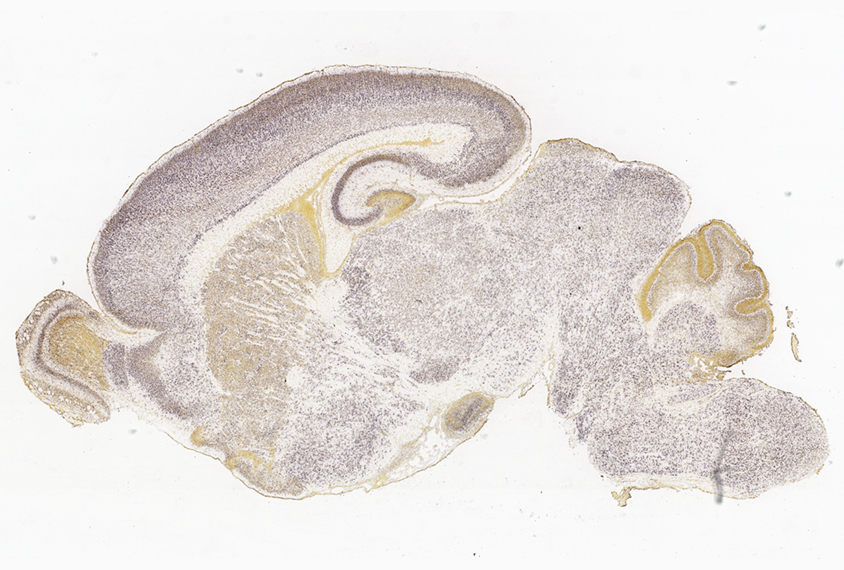 High expression: Autism-linked genes such as PTEN are highly expressed in the mouse amygdala, among other brain regions.

Nearly all genes with moderate to strong ties to autism are expressed in the developing amygdala, according to a new study1. In autistic people, a few of these genes show altered expression in the amygdala, a brain region important for social and emotional function.

Past studies have shown that autism-linked genes are typically most active during fetal development in the cerebral cortex, the brain’s outer layer2. They have also shown that people with autism have alterations in the structure and function of the amygdala, and that the region is implicated in core autism traits, including difficulties in processing facial expressions.

The new work, however, is the first to focus exclusively on how autism-linked genes are expressed in the human amygdala over time.

“The amygdala has not been delved into in any way with the level that we did,” says Joshua Corbin, who led the study and is principal investigator at the Center for Neuroscience Research at Children’s National Hospital in Washington, D.C.

The majority of the autism-linked genes the team considered are expressed in the amygdala’s excitatory neurons, the study shows. These neurons increase communication between brain cells and connect to other brain regions implicated in autism, including the prefrontal cortex. The findings may help researchers better understand how autism-linked genes contribute to alterations in the amygdala and to autism traits. The work was published in May in Molecular Autism.

“Understanding where those genes are expressed in the brain, at what stage and what cell type — I think those are important questions,” says Deyou Zheng, professor of bioinformatics at the Albert Einstein College of Medicine in New York City, who was not involved in the study.

The team first compiled a list of 323 genes with moderate to strong ties to autism, drawing on a curated database and a January sequencing study.

Looking for these genes in the BrainSpan Atlas, an online repository of gene expression data from human brain tissue, the researchers found that 271 are active in the amygdala in the fetal to early postnatal stages of development. A preliminary analysis showed that 10 are also expressed in other brain regions, including the neocortex, striatum, hippocampus and cerebellum.

This finding “is aligned with the thinking that most of the autism genes are not only affecting one cell type or one brain region,” Zheng says.

Corbin’s team also searched for the 271 genes in the Allen Developing Mouse Brain Atlas, which contains high-resolution data on gene expression in mice. They found that 80 of them, including PTEN, ADNP and FOXP1, are expressed in embryonic tissue that gives rise to portions of the amygdala, especially the basolateral nucleus, known to regulate emotional reactivity.

Finally, the researchers reanalyzed data from a 2019 study by another group to assess the genes’ expression levels in postmortem amygdala tissue from five autistic and five typical people aged 4 to 203. Cells from the autistic people’s brains had altered levels of 7 of the 271 genes, most of which function in excitatory neurons.

That finding supports the theory that autism traits arise from a signaling imbalance between neurons, but it is at odds with a previous study that showed that autism genes tend to be overrepresented in inhibitory neurons across the brain4.

“Many more individuals need to be analyzed” to reach any firm conclusions, says David Anderson, professor of biology at the California Institute of Technology in Pasadena, who was not involved in the study.

It remains unclear how gene expression in the amygdala relates to autism traits, Anderson says. Future studies should look at gene expression across the entire brain to get a more holistic understanding of changes in autism genes, he adds.

Corbin’s team is narrowing in on specific autism genes identified in the current study and modeling them in mice. The goal is to see if knocking them out in the mouse amygdala will result in social and behavioral difficulties analogous to those seen in people with autism.