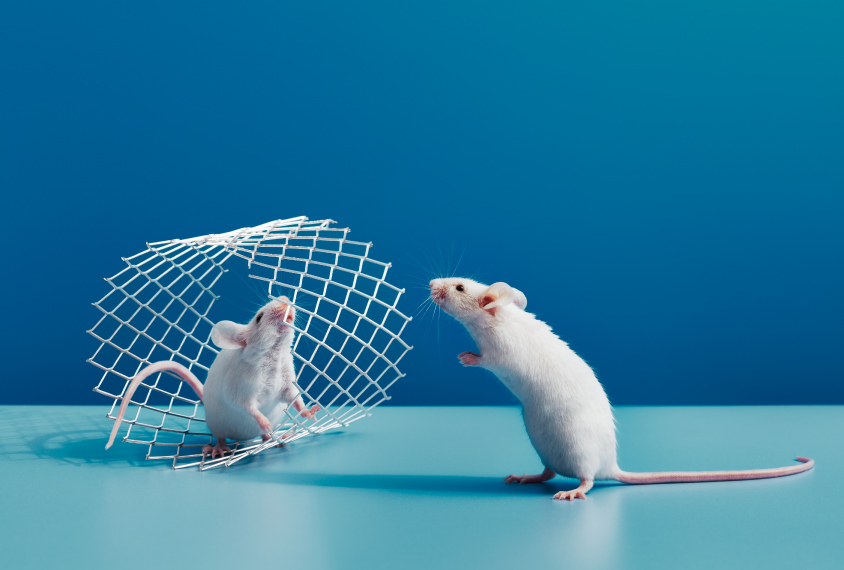 Social circuit: FMR1 and TSC2 mutations disrupt a neural circuit between two brain regions that seems to be essential to social behavior in mice.

Atypical social behaviors are linked to dysfunction in a brain circuit connecting the prefrontal cortex and the thalamus, according to two unpublished studies of mouse models.

This work adds to other evidence implicating cortico-thalamic circuits in social behavior and autism. Researchers from Hirofumi Morishita’s lab at the Icahn School of Medicine at Mount Sinai in New York City presented the findings on Tuesday at Neuroscience 2022 in San Diego, California.

“We want to know which circuit is causally important for social behavior, because we can manipulate the circuit in the mouse,” Morishita says. “Another key part is which circuit is more vulnerable to genetic factors like autism, or environmental factors.”

The medial prefrontal cortex (mPFC) plays a central role in social behavior, and the paraventricular thalamus (PVT) is involved in adaptive behaviors. Deactivating neurons that extend from the mPFC to the posterior PVT causes mice to lose interest in other mice, according to a 2020 study from Morishita’s lab. And adult mice raised in isolation have sociability issues, along with reduced excitatory input and increased inhibitory input into this circuit, that study also showed.

Similar behavioral and circuit differences occur in mice carrying mutations in autism-linked genes, one of the new studies shows. And the circuit dysfunction induced by social isolation during early life develops during adolescence, according to the second study.

Neither study clarifies whether the changes are the primary cause of social deficits or an incidental or compensatory change, says Audrey Brumback, assistant professor of neurology and pediatrics at the University of Texas at Austin, who was not involved in the work. But taken together, she adds, they address a central question in autism research: “What are the final common pathways that will allow us to treat neuropsychiatric symptoms regardless of the underlying cause?”

In the first study, the researchers recorded electrical activity in the mPFC-pPVT circuit in brain slices from mice carrying variants in two genes linked to autism: FMR1 and TSC2 — chosen because they are known to be enriched in the mPFC, says study investigator Kazuya Okamura, a postdoctoral fellow in Morishita’s lab.

The FMR1 and TSC2 mice show reduced excitation and increased inhibition in this brain circuit.

“It’s a double punch,” Morishita says. “The surprise was that’s the same deficit we see in the socially isolated animal.”

Three different inhibitory interneuron types in this circuit showed similar high-frequency activity upon stimulation, hinting at this circuit as a converging network for both genes. “We hoped some special neuron was increased, but the result is that all the interneurons increased,” Okamura says.

The study measured cells in brain slices from adult mice, so Okamura’s next steps will be to record activity in neurons from younger mice to see when these changes arise, he says.

Wildtype mice raised in isolation for two weeks after weaning don’t have circuit defects at the end of the isolation period, the team’s 2020 study showed. But once the mice hit adolescence, at about 50 days of age, they no longer show interest in other mice, according to the other new work the team presented at the meeting.

The excitability of neurons projecting from the mPFC to the pPVT also plummets at this age.

“There’s a pretty nice relationship between the sociability deficits and the PFC physiology deficits,” says investigator Michael Leventhal, a graduate student in Morishita’s lab, who presented the work. Juvenile social isolation seems to set the mice on this developmental trajectory, he says.

“We are not sure that the stress hormone per se is the cause of the deficit,” Morishita says. “We doubt that that’s the case, but it’s a nice readout of what the animal is going through.”