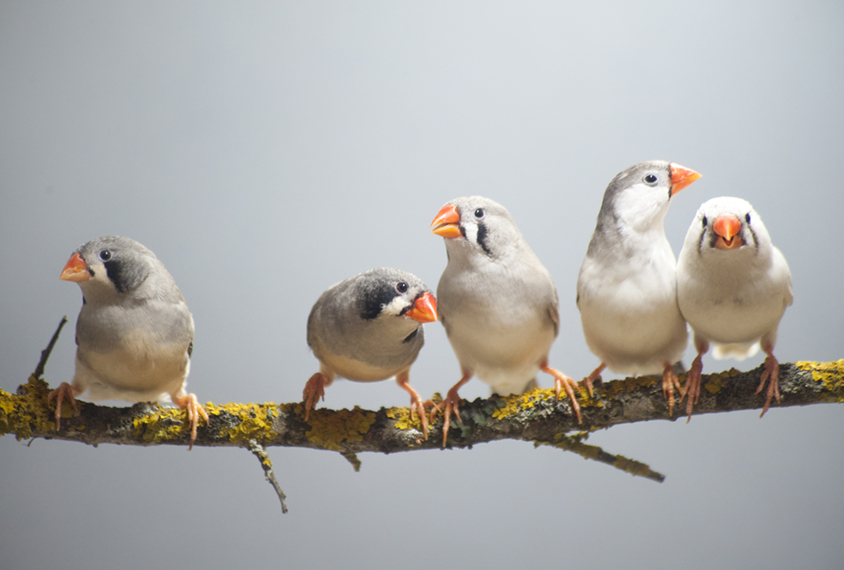 Low volume: Turning down expression of the gene FOXP1 hinders song learning in young zebra finches and language development in some autistic children.

Muffling expression of an autism-linked gene in young zebra finches’ brains renders them unable to learn songs from older birds, according to a new study. But it does not alter their ability to practice and perfect previously memorized melodies.

The gene, FOXP1, belongs to a family of genes that regulate the expression of other genes and shape nervous system and language development. People missing one copy of FOXP1 have language impairments and intellectual disability; those with mutations in the gene often have autism traits.

“Our overall goal was to try to understand if we could use songbirds as a model system for understanding how genes associated with [autism] can influence the transmission of behaviors from one generation to the next,” says study leader Todd Roberts, associate professor of neuroscience at the University of Texas Southwestern Medical Center in Dallas.

Songbirds such as zebra finches learn to sing by imitating adult birds, much as young children learn language and social skills by mimicking their caregivers — a process disrupted in autism.

This learning involves forming a memory — of a song motif, a word or a social behavior, such as waving — and then practicing that memorized riff or action to perfect it. The new study suggests that FOXP1 plays a role in the first step of that process.

“It shows that we can start to disentangle these different aspects of learning,” Roberts says.

Other research has found that turning down the activity of another autism-related gene, CNTNAP2, in song-related brain regions also impairs zebra finches’ ability to learn songs. FOXP2, a gene closely related to FOXP1, is also involved in song learning in the birds.

But relatively little has been known about the role of FOXP1 in vocal learning, says Jon Sakata, associate professor of biology at McGill University in Montreal, Canada, who was not involved in the work. “I think the experimental design and results are pretty compelling with regard to learning.”

Roberts and his team designed a molecule that partially blocks expression of FOXP1 and injected it into the brains of male zebra finches at about 35 days old — an age at which the birds are typically engaged in memorizing songs.

The researchers aimed the injections at an area called the HVC, which roughly corresponds to certain speech-related regions of the human cerebral cortex and plays a key role in song learning and production in songbirds.

Cells throughout the HVC express FOXP1, especially neurons that connect with another song-related brain region called area X. Birds treated with the FOXP1-blocking molecule had about half the normal amount of FOXP1 protein in these neurons.

Roberts and his colleagues expected that this dearth of FOXP1 protein would hinder the practice-and-perfect phase of song learning, based on past research. But birds that had heard adults singing before FOXP1 was disrupted grew up to sing typical zebra finch songs, the team found.

“That was really surprising to us,” Roberts says.

So the researchers turned to zebra finches raised in isolation without the opportunity to memorize adult birdsong. They injected these birds with the FOXP1 blocker and then put them in a cage with an adult ‘tutor.’

Repeat after me: Young zebra finches learn songs from adult tutors in two parts, by memorizing songs and then rehearsing them.

“It was kind of like a last-ditch effort on the project,” Roberts says. “And then that’s when we saw this huge effect.”

The birds that had FOXP1 expression dampened before hearing a tutor’s song grew up to sing variable and disorganized songs — much like those of adult birds that never heard adult birdsong during their youth.

The results suggest that FOXP1 “has a very specific effect, just on the ability to encode memories of the social model that you want to imitate,” Roberts says. The study appeared 3 February in Science Advances.

The new study does not address the role of FOXP2 in the song memorization process, says Gudrun Rappold, a geneticist at the University of Heidelberg in Germany, who was not involved in the work. The proteins encoded by FOXP1 and FOXP2 form complexes with each other, and both interact with CNTNAP2. Future research should aim to tease out how FOXP2 interacts with FOXP1 in the HVC when birds are forming memories of a tutor’s song, Rappold and Sakata both say.

The shortage of FOXP1 protein made neurons linking the HVC and area X less excitable than normal, they found, whereas these neurons typically become more excitable when a bird is first exposed to a tutor’s song. It also disrupted the organization of neural activity into ‘bursts’ — something that typically occurs when the birds first hear a tutor’s song.

Exposure to adult birdsong also normally increases the abundance of AMPA receptors relative to NMDA receptors on HVC neurons. But this shift did not occur for birds exposed to the FOXP1 blocker before hearing a tutor’s song.

Finally, the scarcity of FOXP1 slowed the turnover of dendritic spines, protrusions involved in receiving messages sent between neurons, a process that is known to help birds learn tutors’ songs.

“These are just all very classic, strong correlates of learning and memory formation,” and all are disrupted by the loss of FOXP1, Roberts says.

Dampening FOXP1 in the HVC doesn’t affect only neurons that connect to area X, Sakata says. So other HVC neurons could also be important for encoding song memories, as could FOXP1 in other brain circuits. For example, interfering with FOXP1 in area X also impairs song learning in zebra finches, according to other research.